About a year ago I bought one of Mike Morgan’s 3D printed P-38 kits.  I had seen several of the 3D printed kits he was producing and really wanted one.  He offers several models to choose from including a Zivco Edge 540, MIG 15, Piper Pawnee, Corsair F2G, Spitfire, P-51, P-47 and the P-38 (https://morgantech.com/).  I always wanted to build a P-38 so here was the perfect opportunity.

About  Morgantech:  Mike has up to 4 printers going at any one time in his garage/shop.  Mike is a master of organization.  He has to be.  His entire shop fits into 1/2 of a 2-car garage!  There are planes hanging from the ceiling, printers going, a full size laser cutter, CNC router, band saw, shelves, tables, storage, etc.  There is more stuff in there than you would believe possible (think TARDIS).  And all of it is clean, organized and easily accessible. 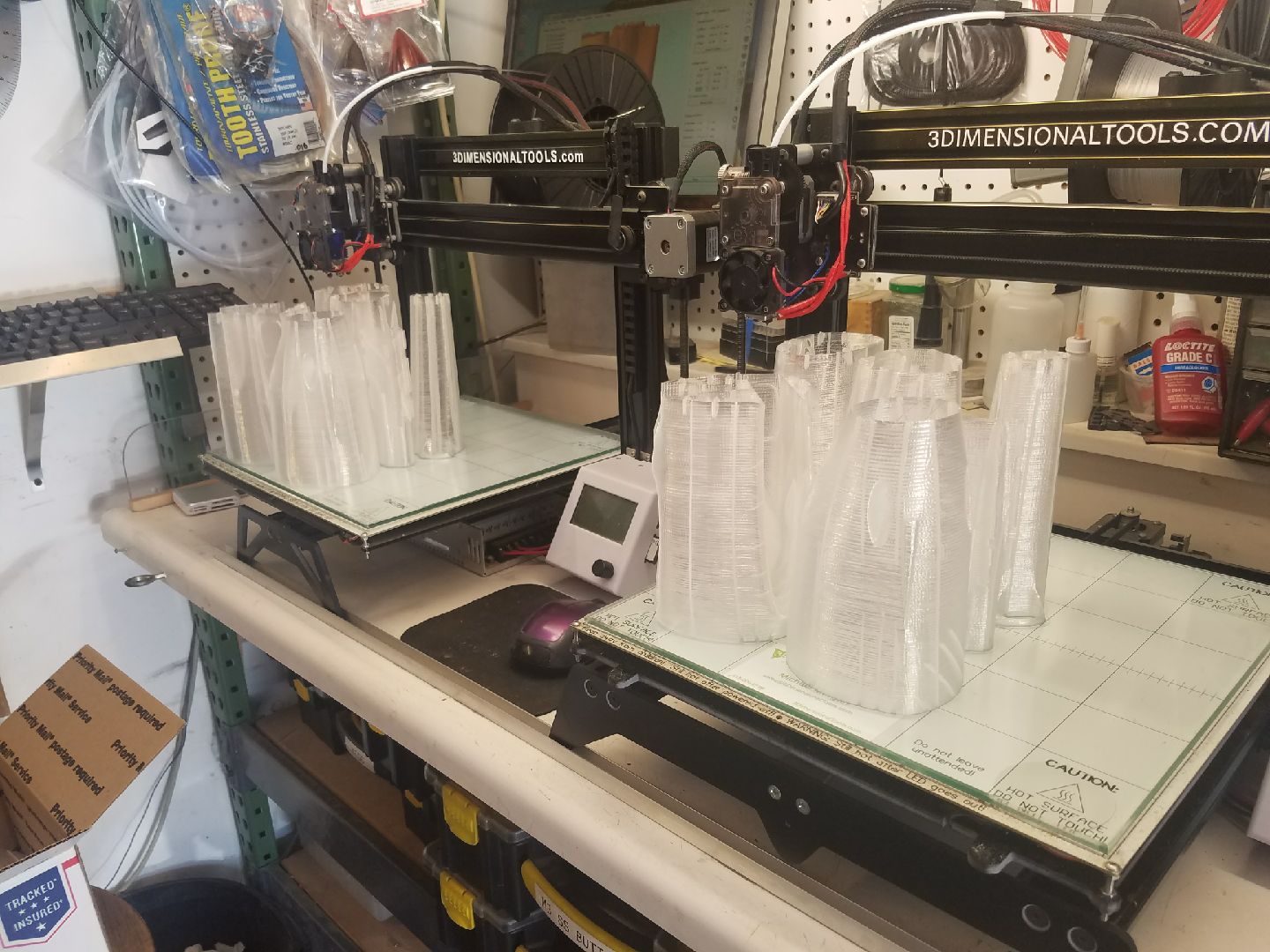 My P-38 parts atop two of Mike’s 3D printers.  Mike makes his own printers as well.  See link above.

3D printing is not fast.  The P-38 takes about 80 hours of printing time.  The process is one thin layer of plastic after another.  One nice thing is the printer can be set up and the operator can go do something else.  Different colors can be selected, I chose clear so folks could see into the plane when it was finished.  The inner structure of these planes is intricate and unconventional.  The files for the planes come from an online source called 3DLabPrint.

When you buy a 3D plane from Mike, you have the option of ordering it with everything you need to assemble.  Just supply your own glue, medium CA is all you need.  I ordered mine with everything and that is what I got: Airframe parts, motors, ESCs, props, prop adapters, landing gear (retracts), wheels, servos (9), printed circuit board, linkages, connectors and all hardware. 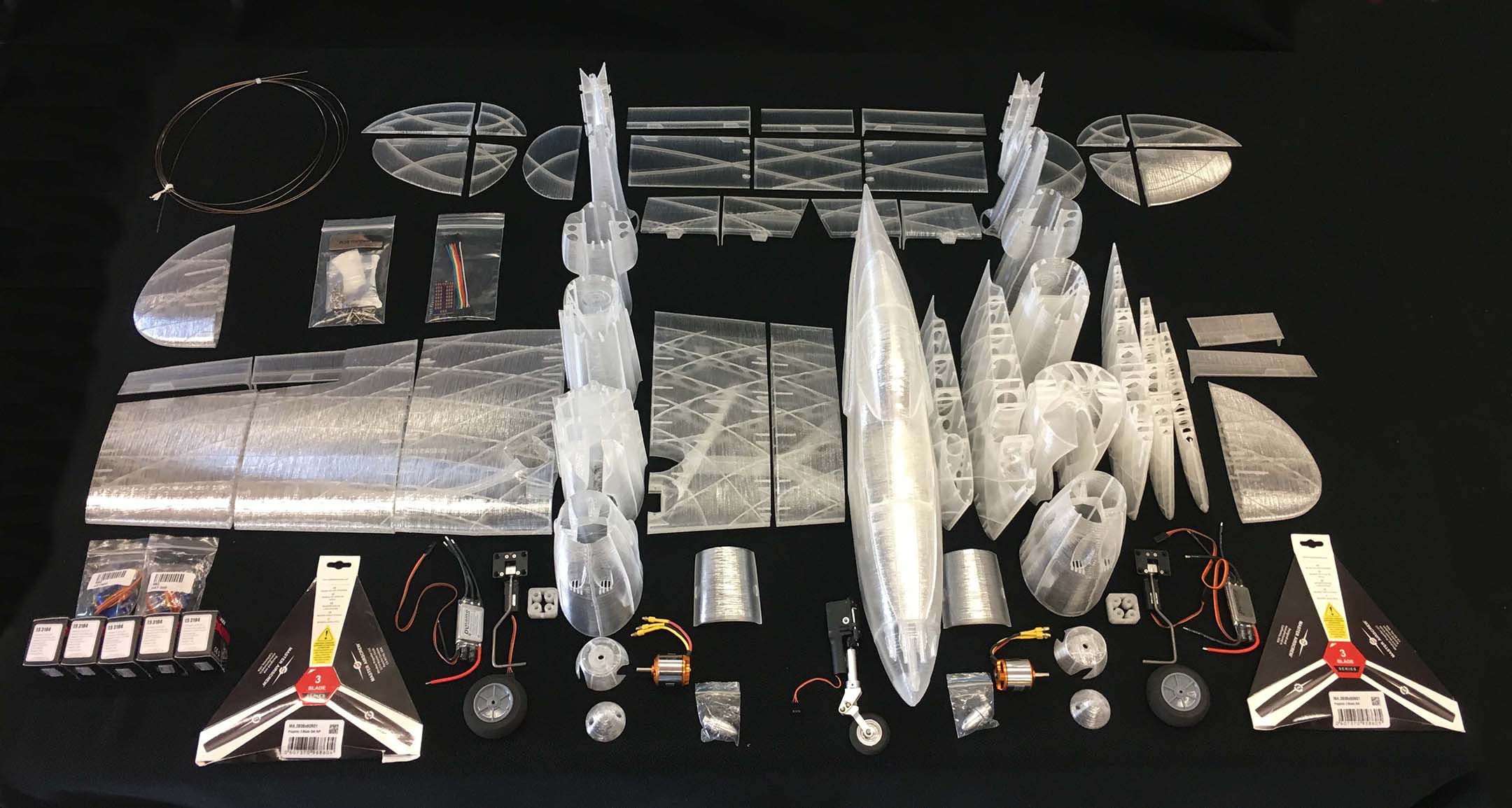 All the P-38 kit parts.  I had already assembled the center fuselage.

Assembly starts with a few helpful tips from Mike.  You will then be watching and following online videos provided by 3D Print Lab.  Here is the guide for assembling the wing for the P-38 as an example.  The videos are sped up so you will need to hit the pause button a lot.

If you, like me, grew up building airplanes; first plastic as a kid, then balsa as I got older, you will be taken back to the days when the model’s parts came preformed and all you had to do was glue them together.  Back then, the plastic planes did not fly (I wished they did).  As I grew up anything that was intended to fly had to be made of wood.  Then came foam, of course.  I kinda felt I was a kid again building a plastic model except this one was going to FLY.

All the parts fit extremely well.  There is some light sanding at the joints before glueing and some of the pushrod holes need a bit of reaming.  Like all glue joints you want to check the dry fit before applying glue.  Otherwise, it just goes together as it is supposed to.  Unlike wood or foam planes, clearances are made not by sanding but by heating the plastic with an old soldering iron and moving it out of the way.  I needed a bit of room for one of the main gears.  You can sand but the plastic is hard and it is slow going.  If you tried to sand the outer surfaces to make them smooth they would become too thin.

Both building and flying the P-38 has been very enjoyable.  I would make another 3D printed plane.

Below will be a series of pictures and caption showing some of the details involved in building the P-38: 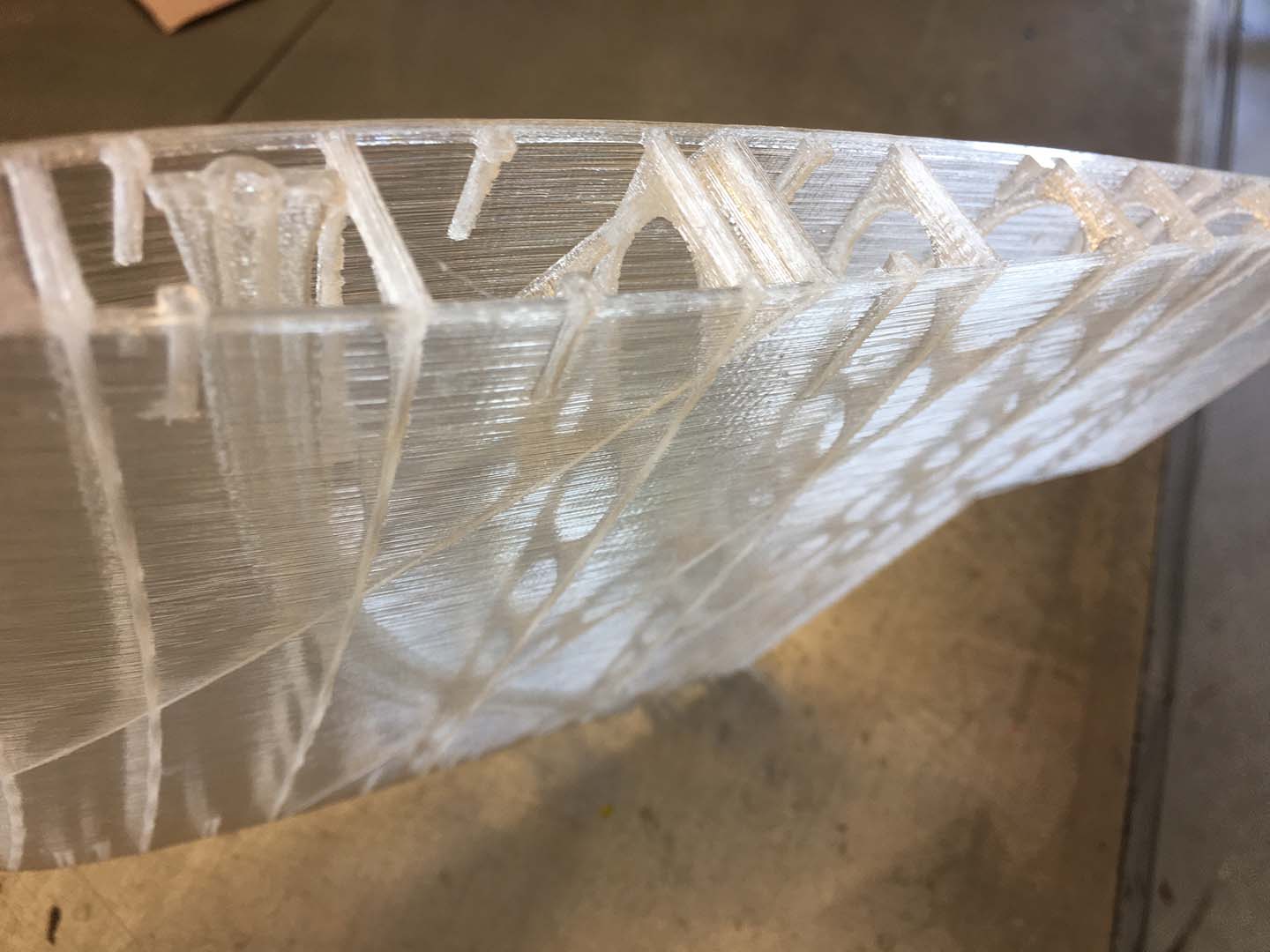 The gluing surface of one of the wing sections.  CA is applied to all the edges you see.  The aileron pushrod is built in. 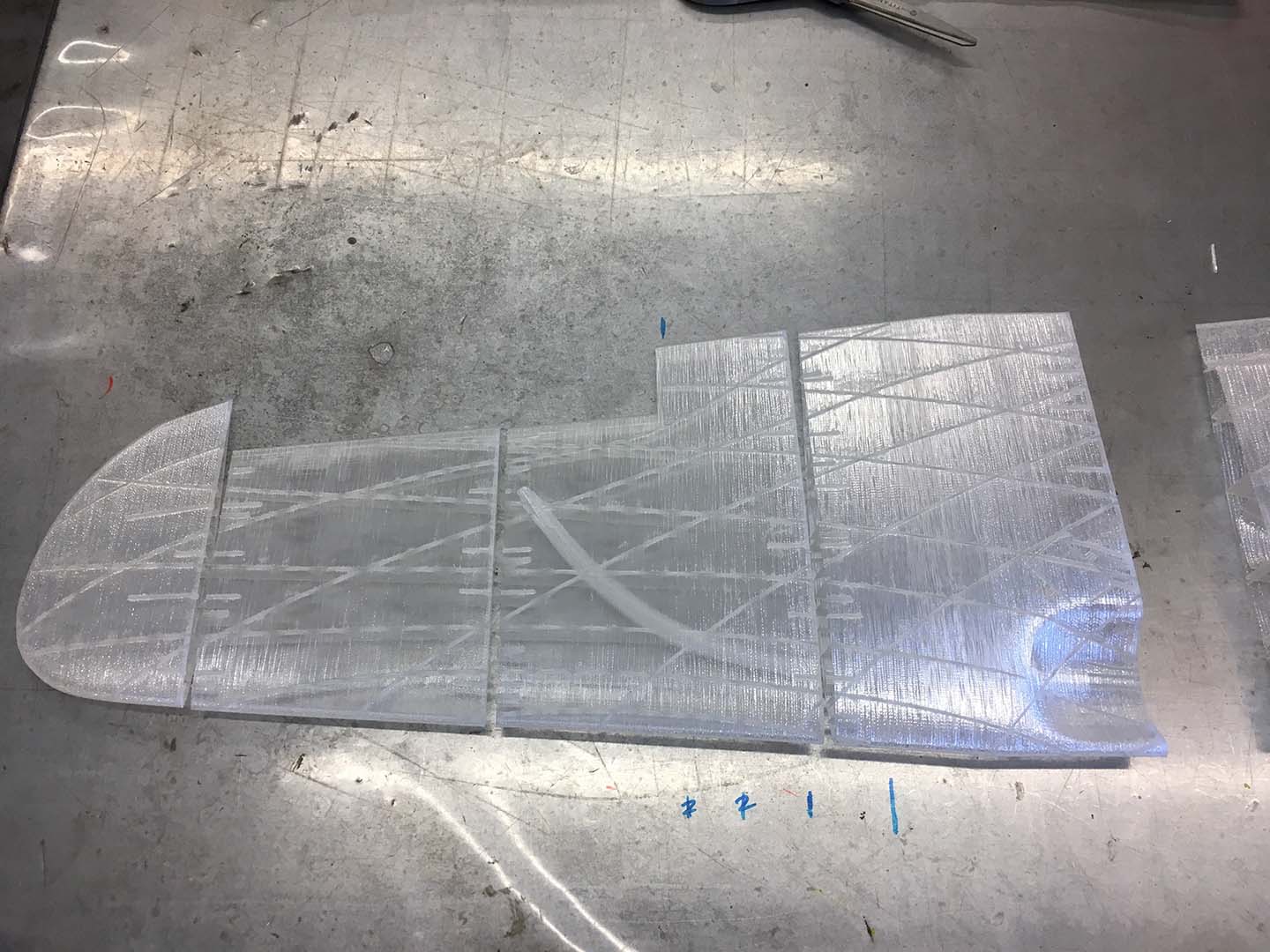 The four sections comprising the left wing before glueing 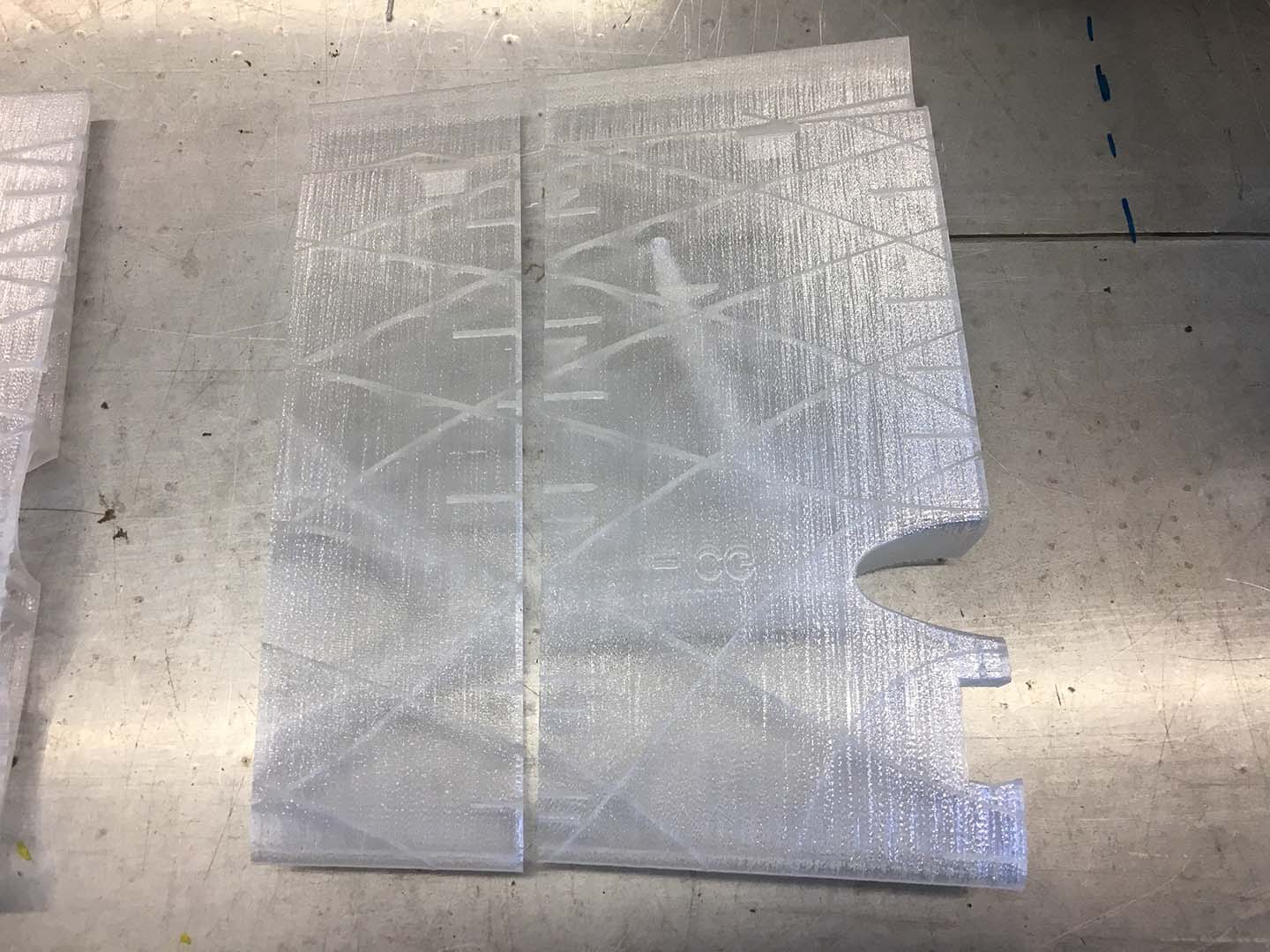 The two sections of the left center section. 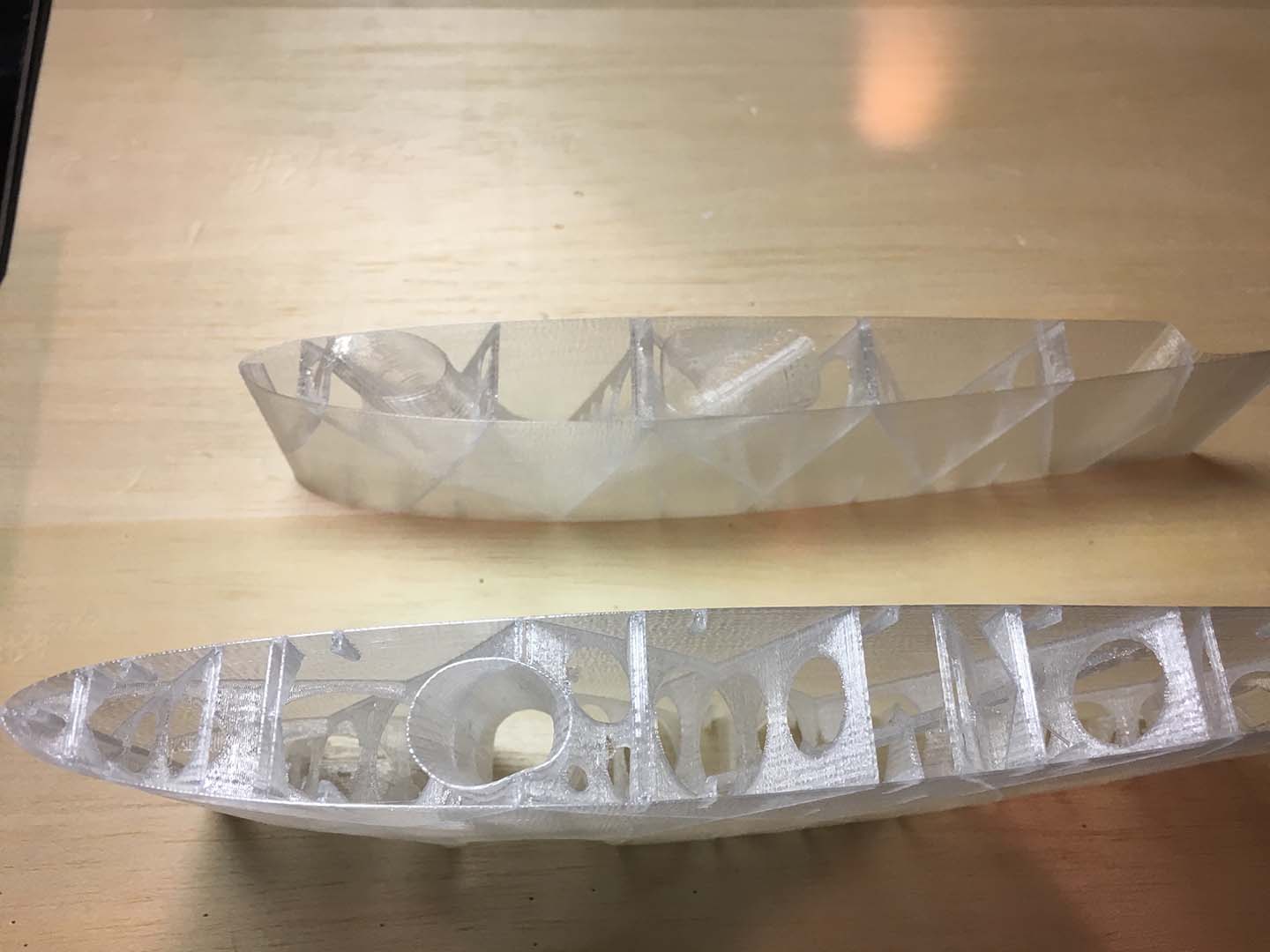 Center wing sections.  The wiring runs for the outer nacelles are built in. 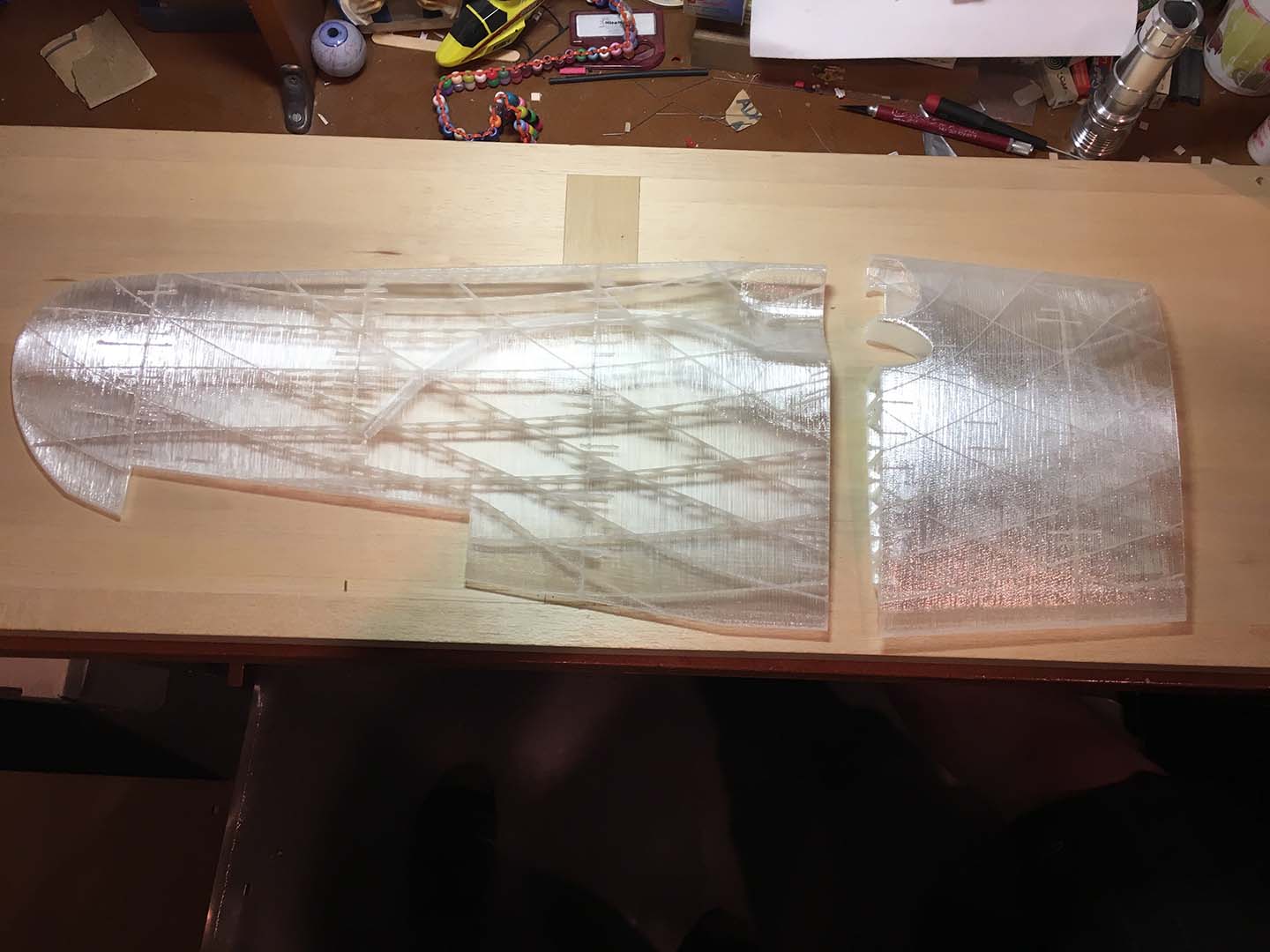 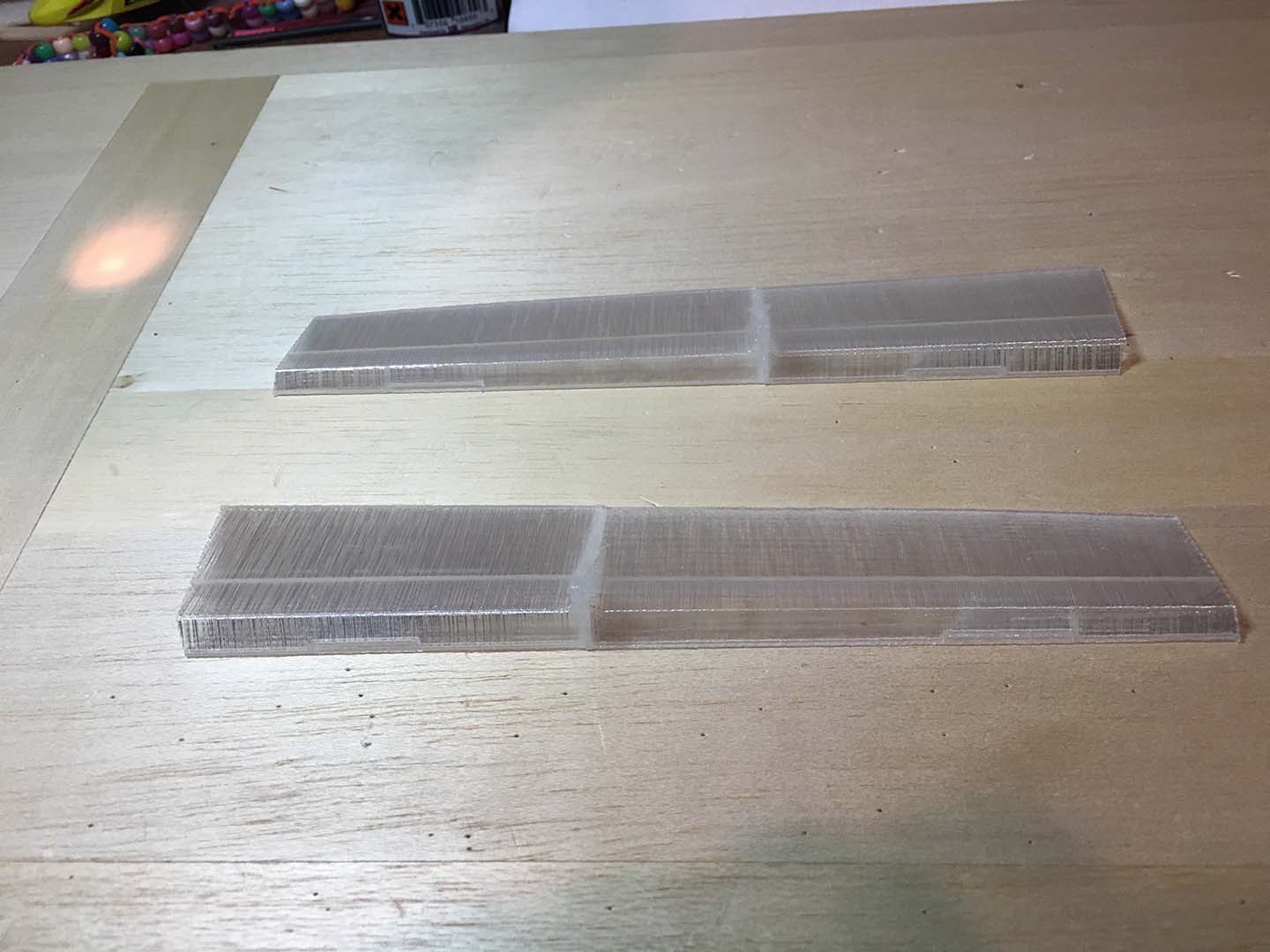 Ailerons assembled.  Not obvious but the control horns are built in. 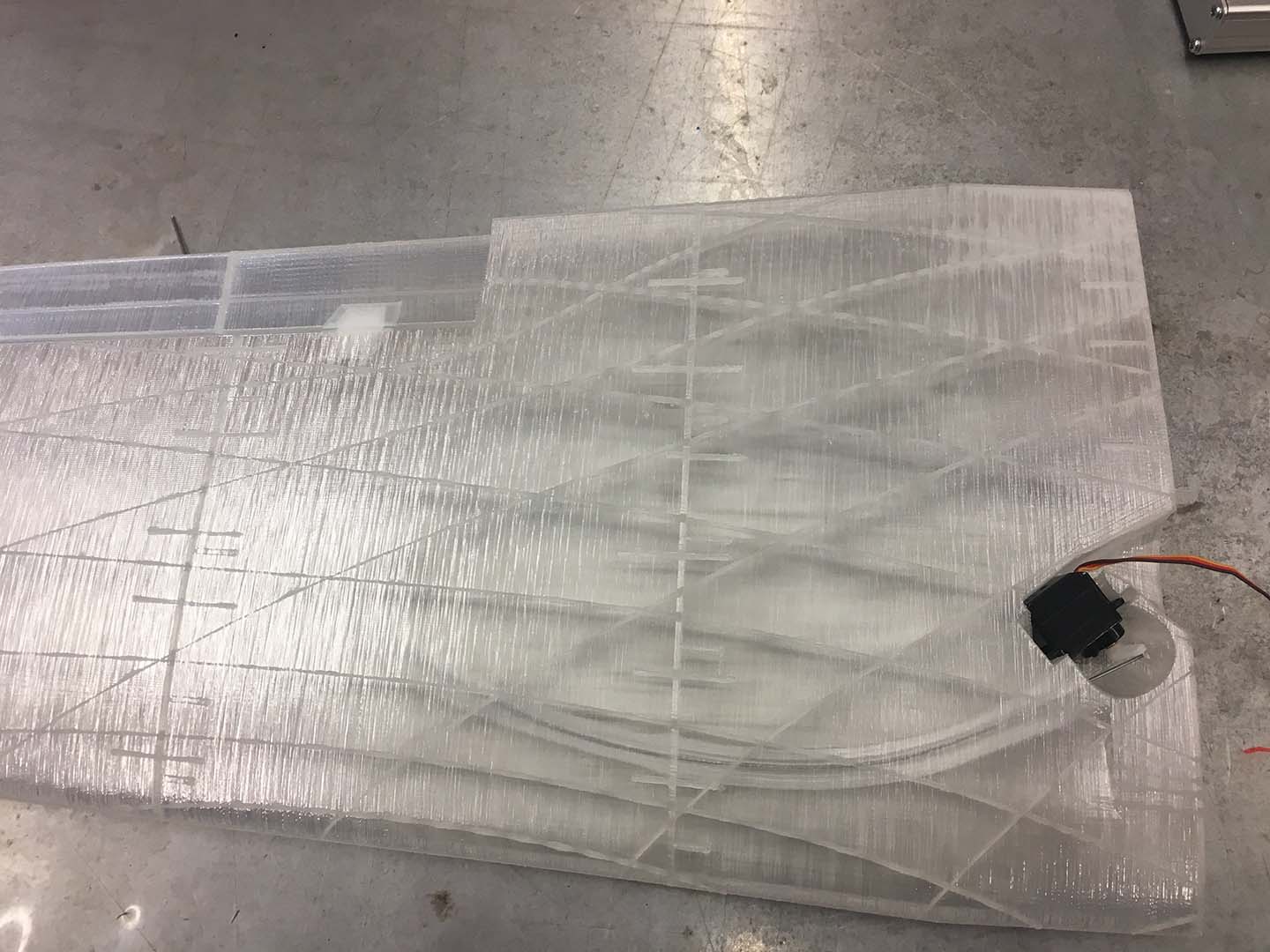 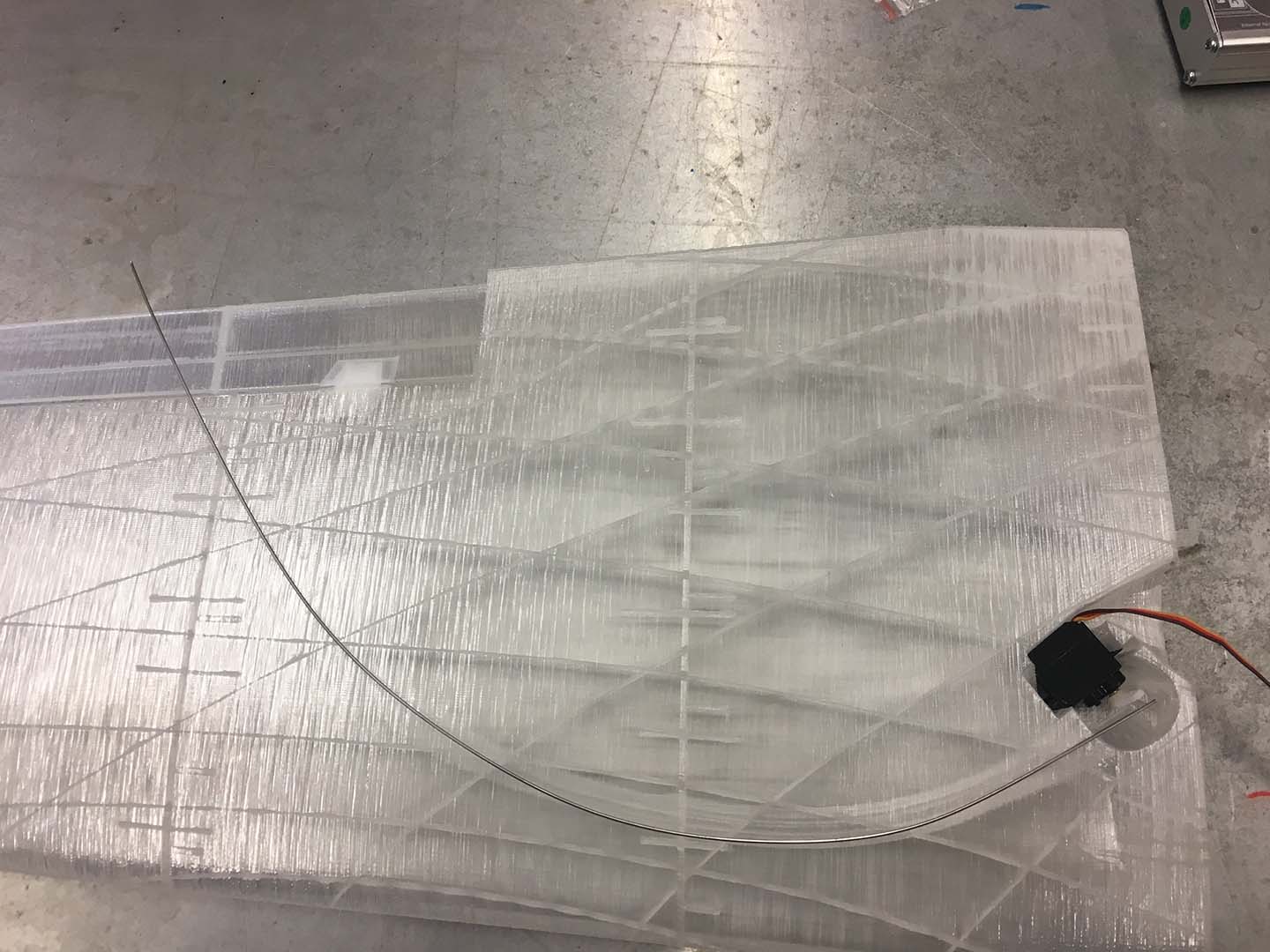 Bend the control cable to match the curve of the pushrod tube in the wing.  This reduces friction. 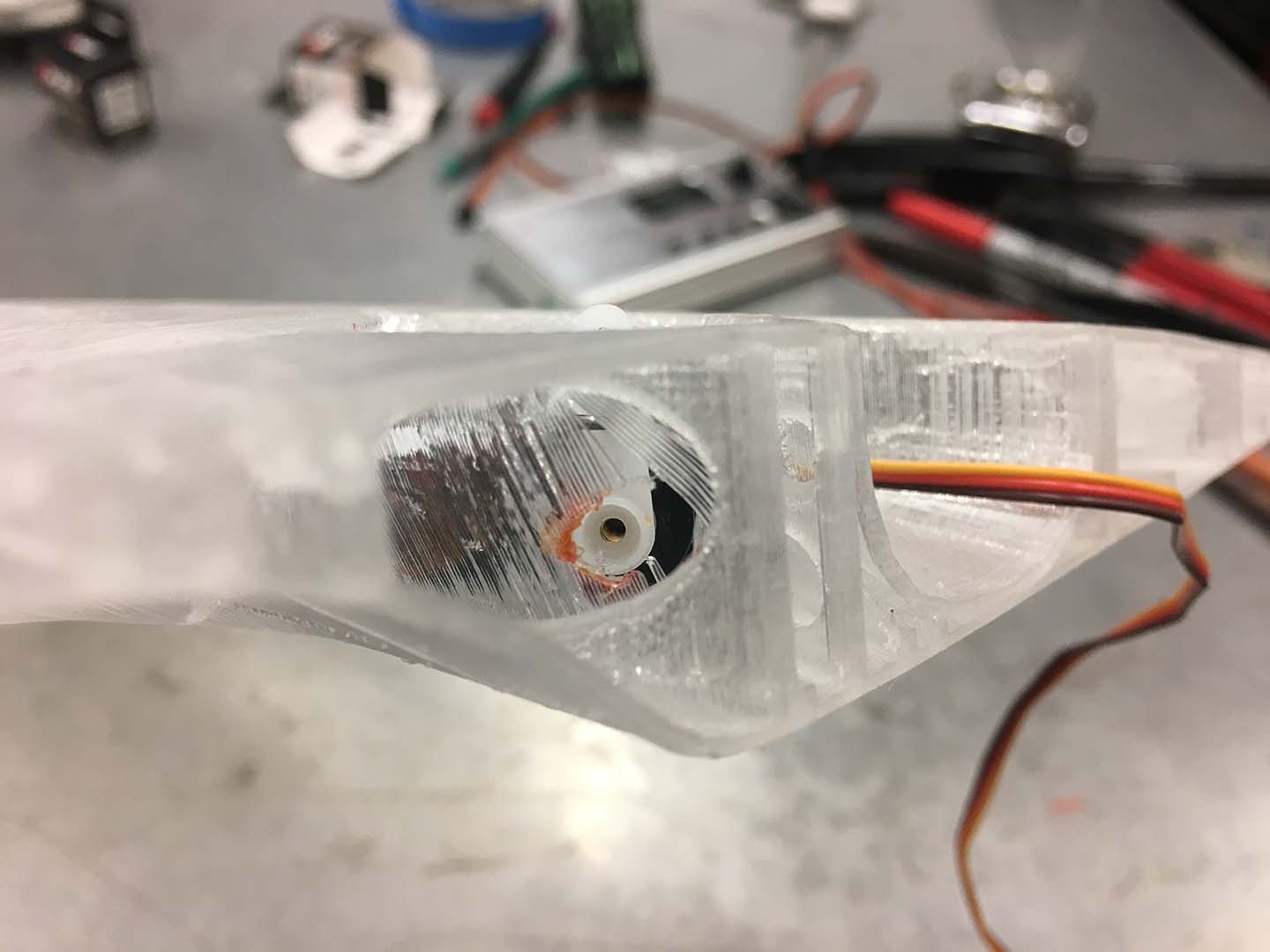 A little material needs to be removed to get at the servo horn screw. 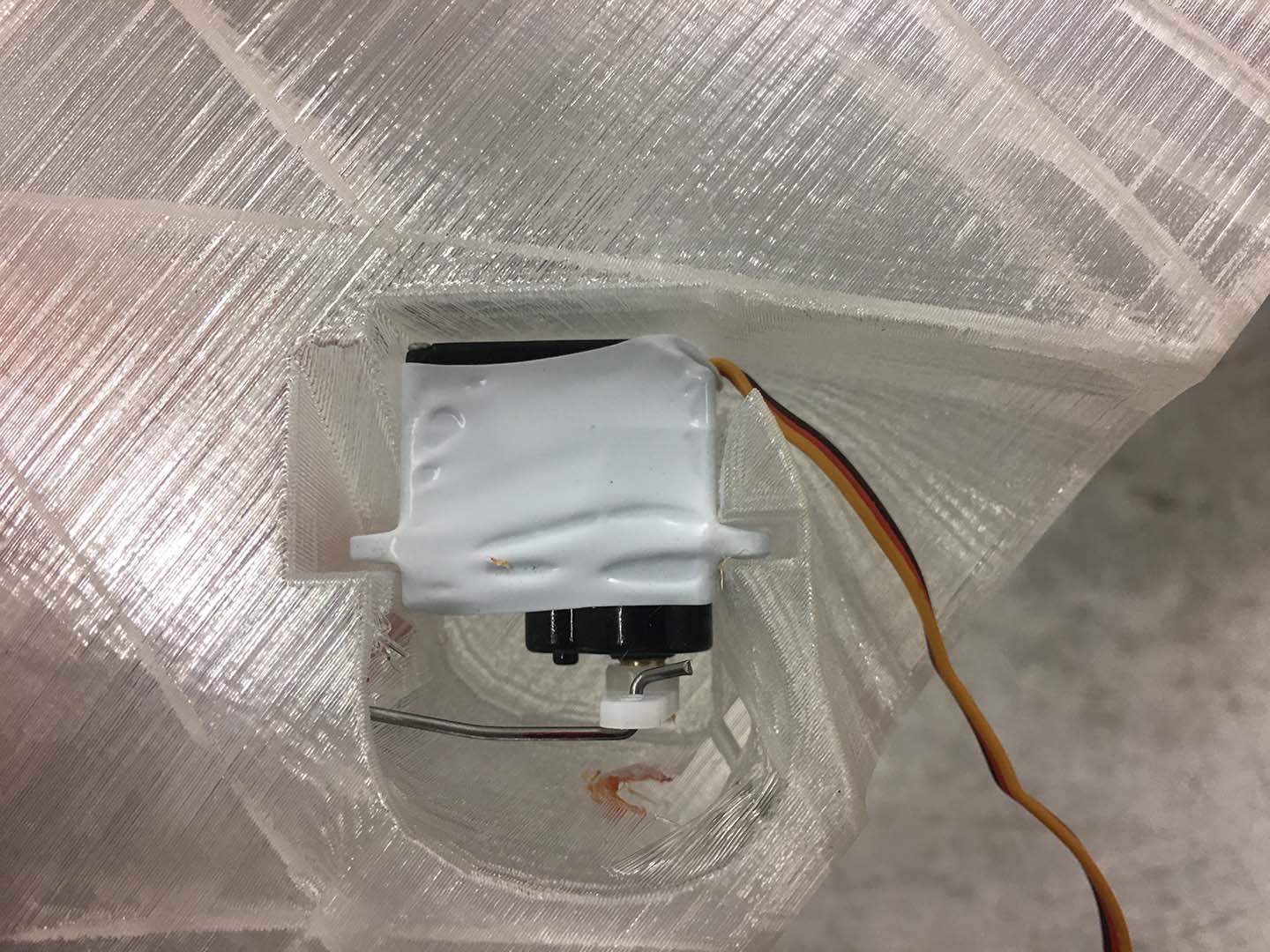 Aileron servo installed.  I wrap with heat shrink then use Goop to attach to wing. 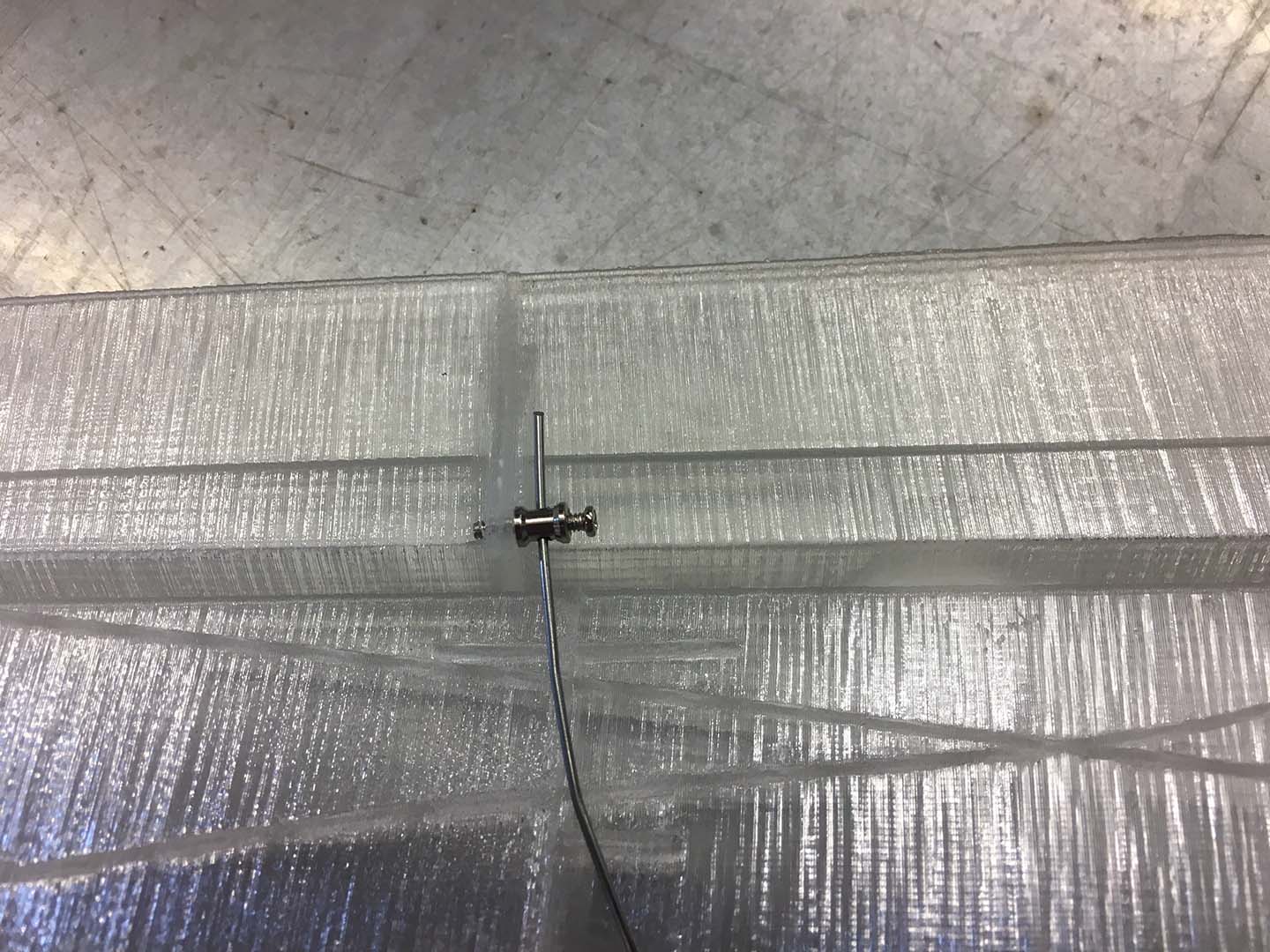 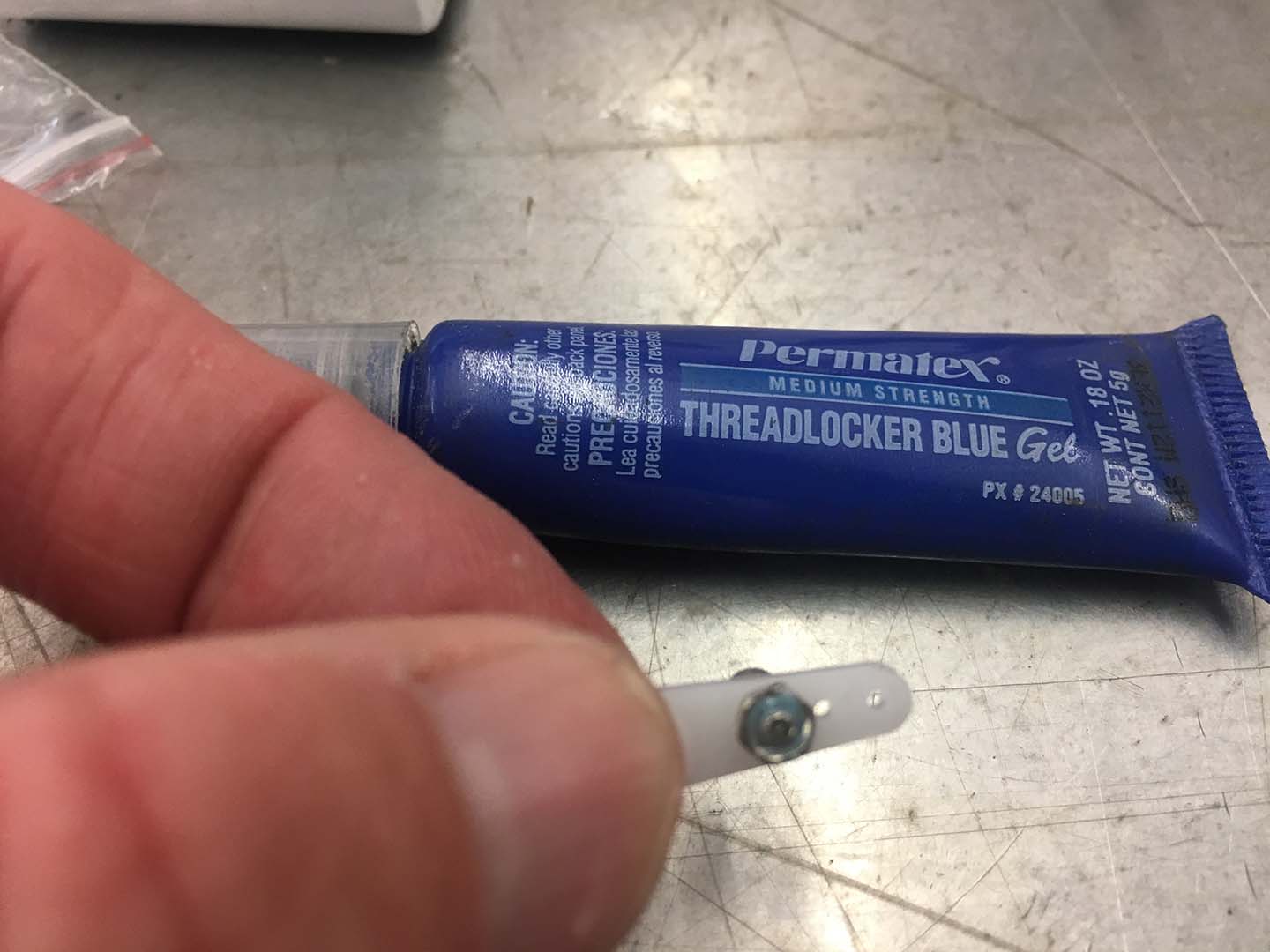 I used thread locker for all screws and nuts throughout the plane. 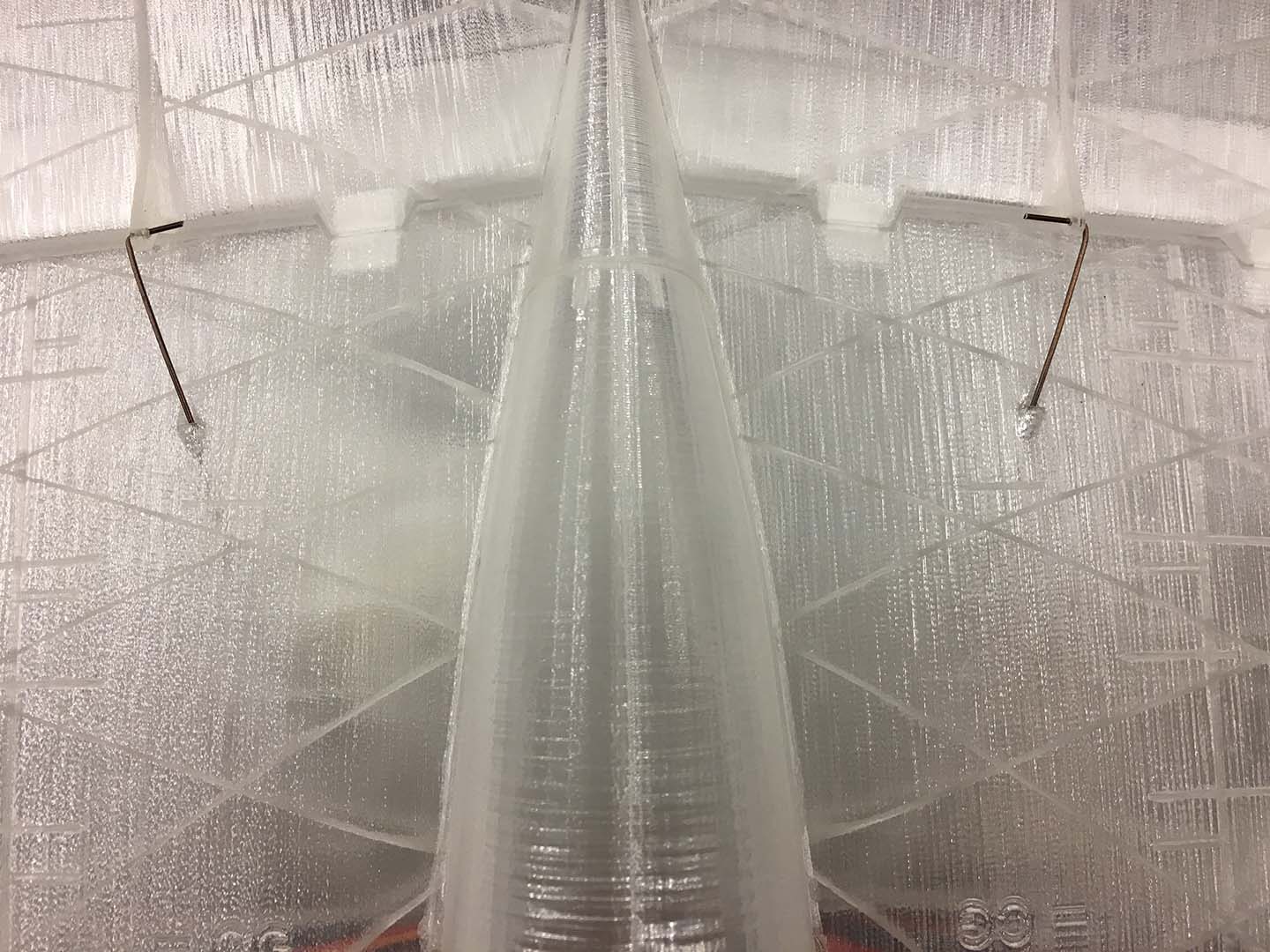 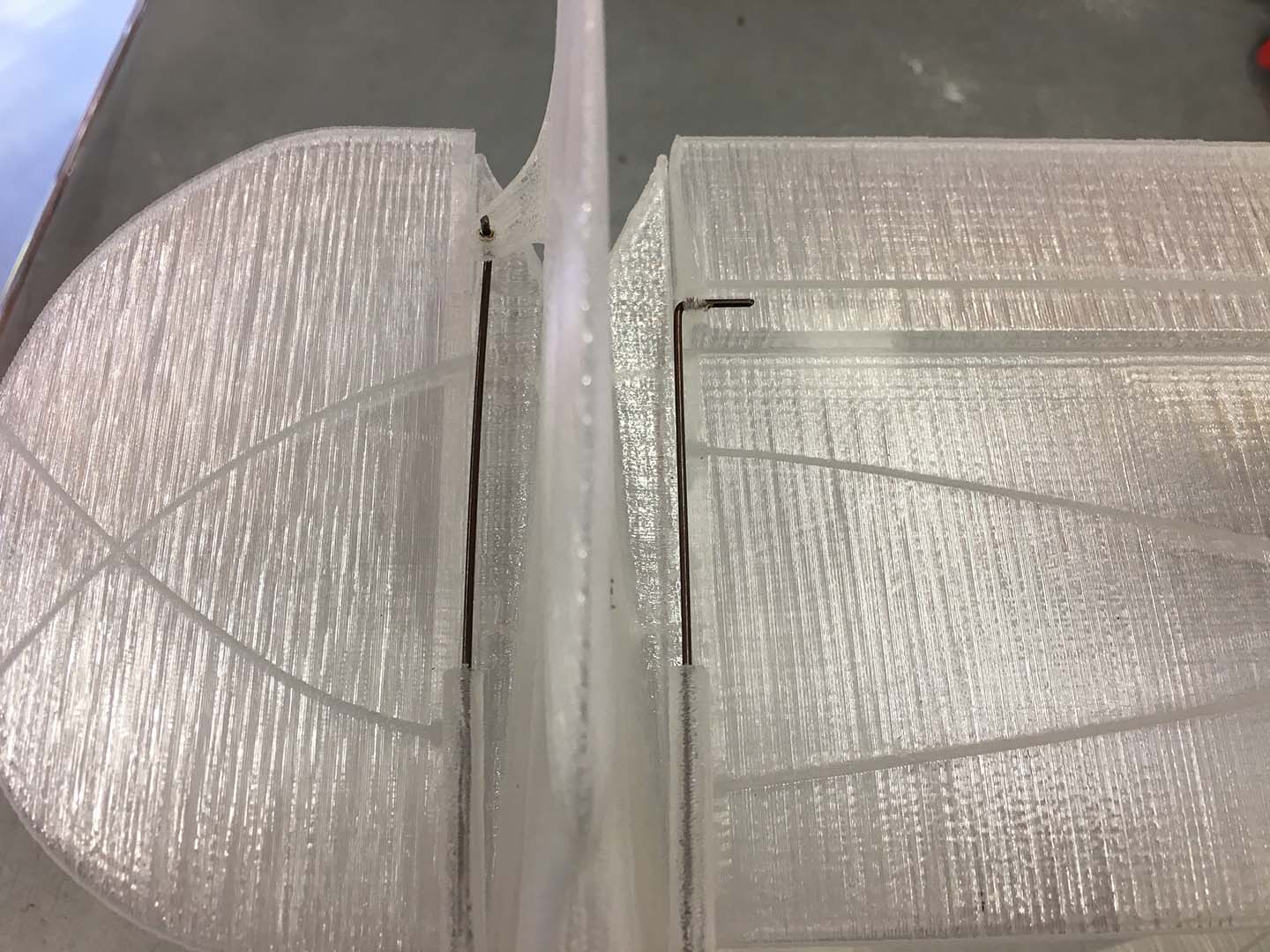 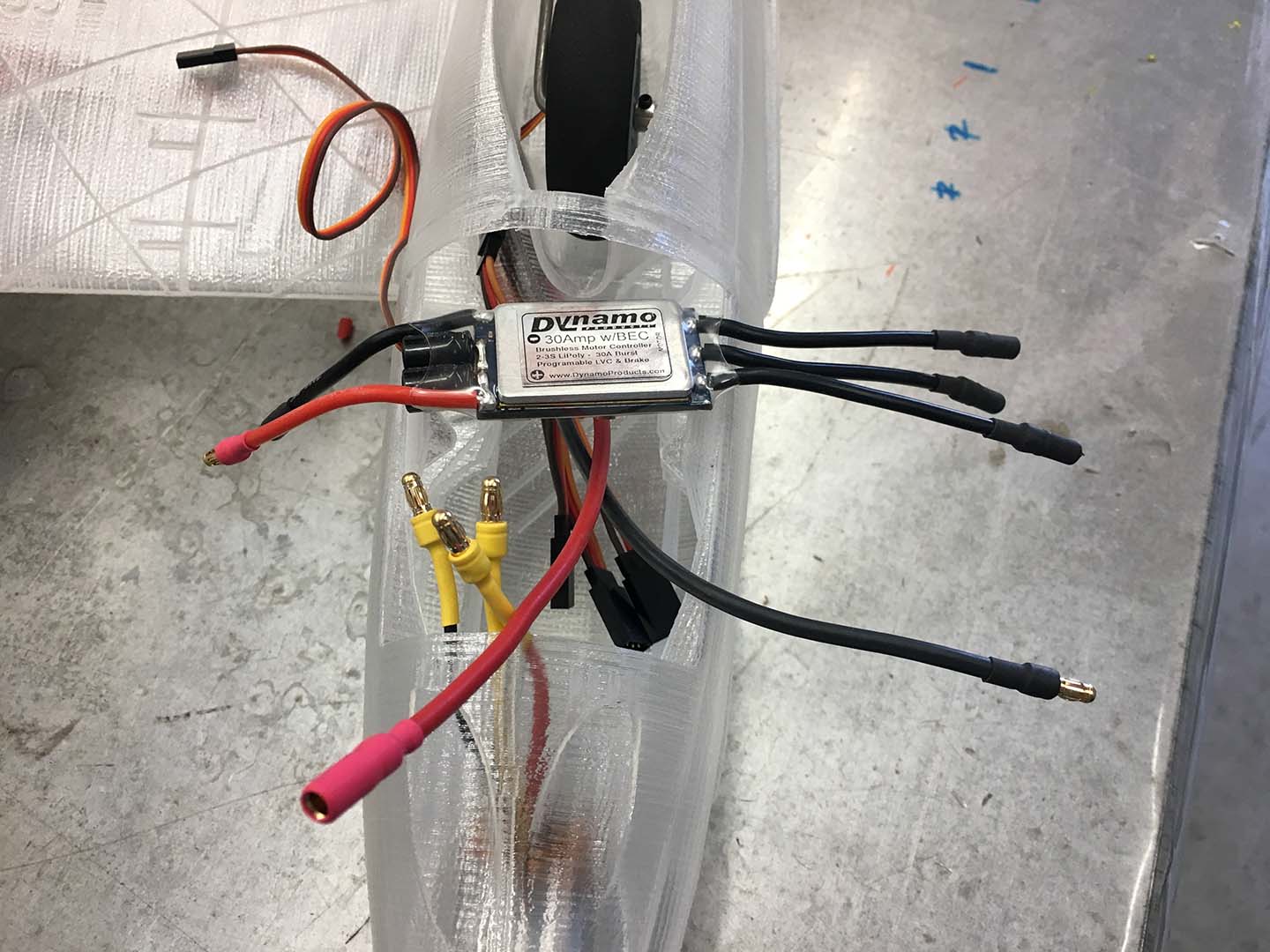 Bottom of right nacelle ready for ESC installation.  Motor and gear are in. 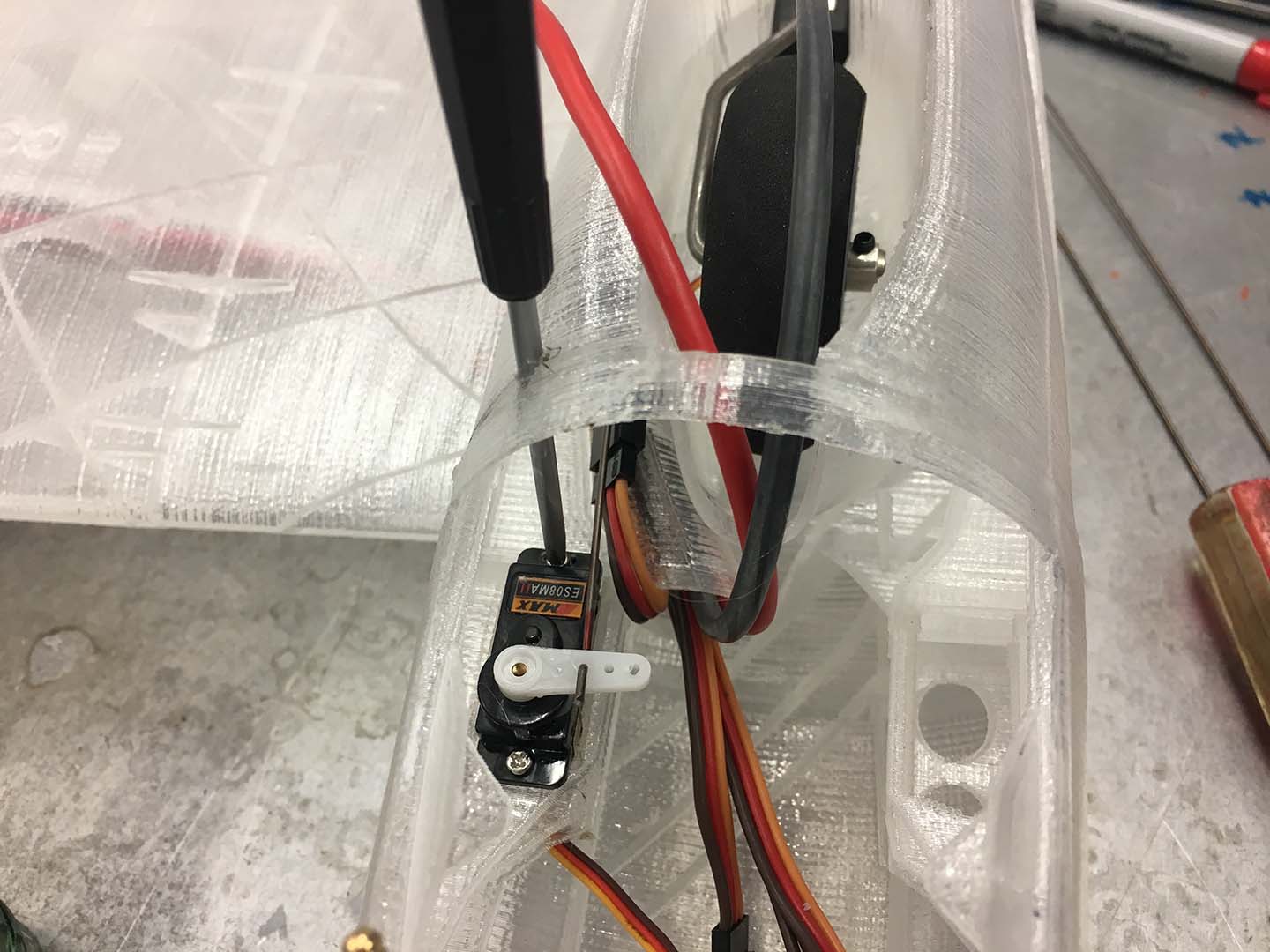 Need to make a hole for the elevator servo screwdriver. 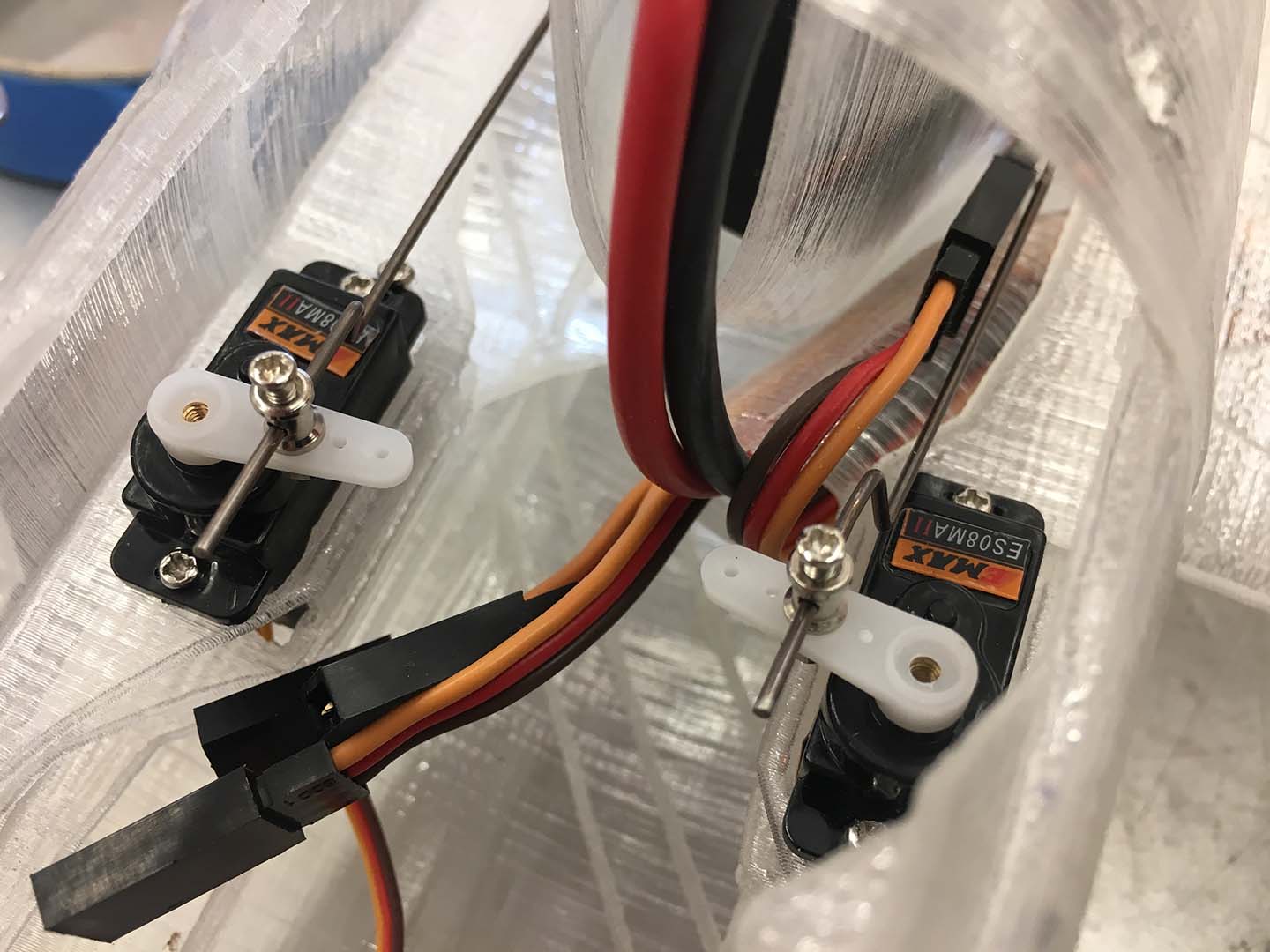 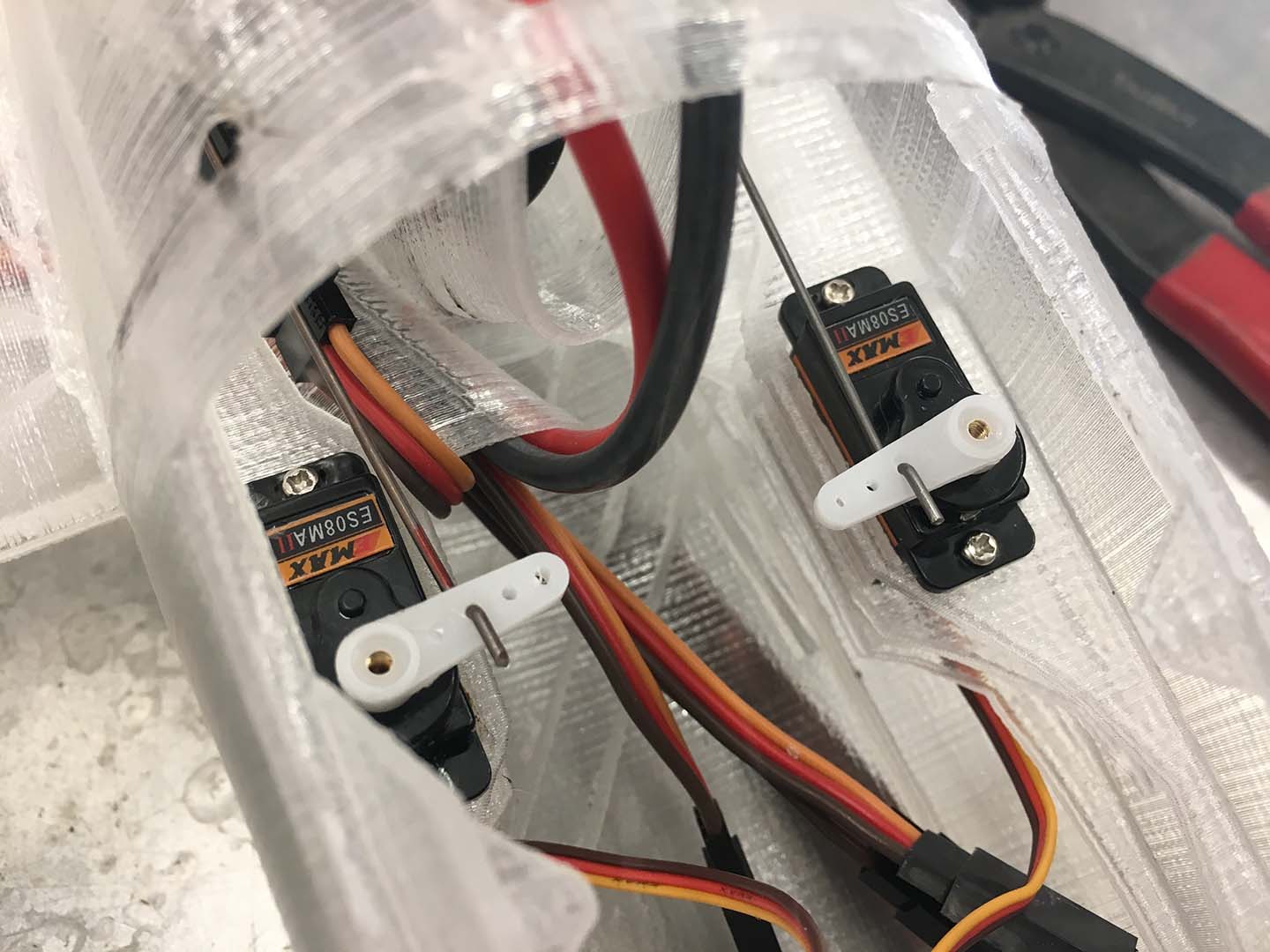 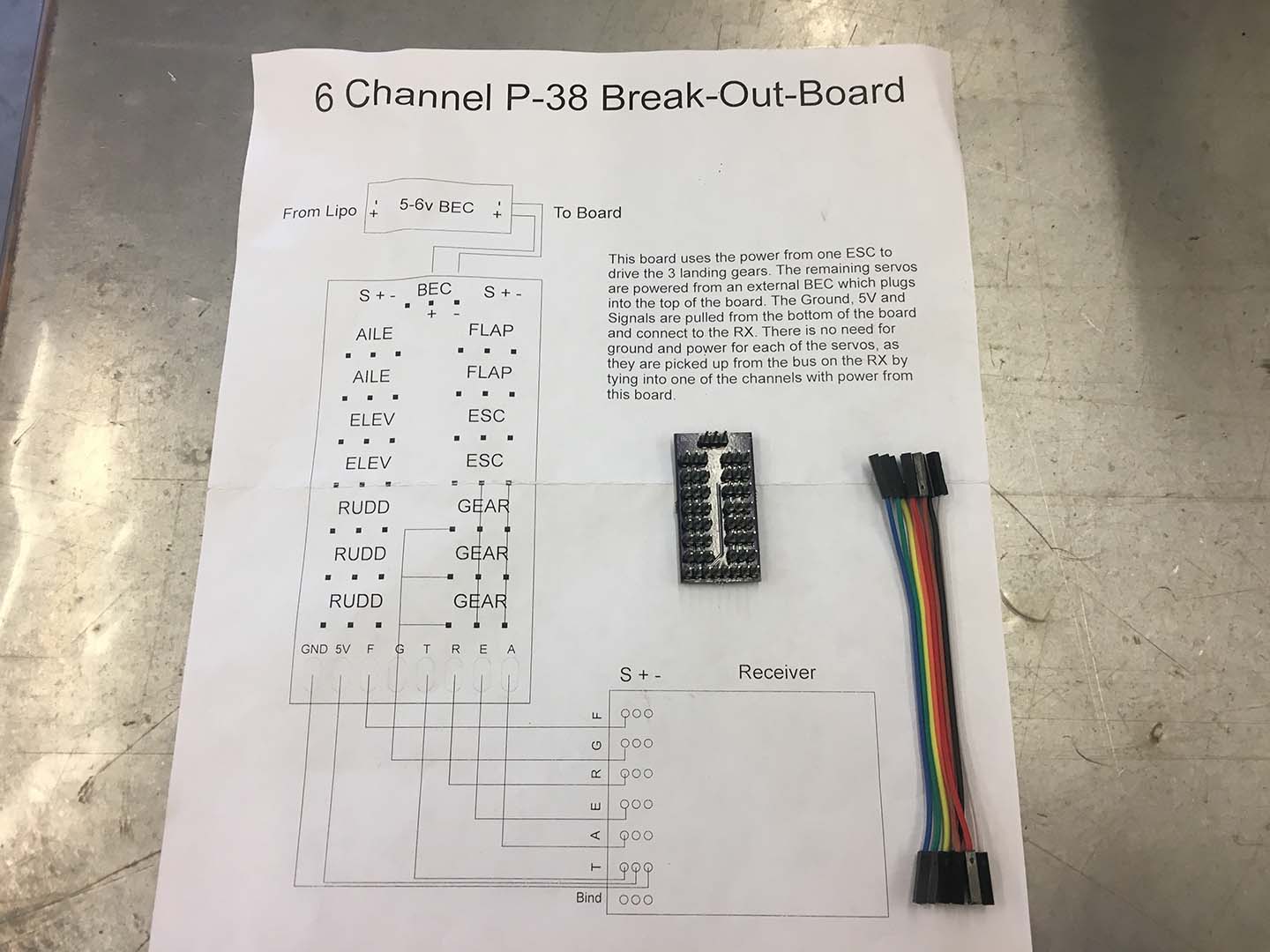 This is a special PCB that Mike had made just for the P-38.  Your Rx connects to the PCB via the cable shown and all the servos connect to the PCB.  The P-38 has 9 servos.  Four pairs of servos are “Y connected” together.  If one actually used Y-connectors there would be a massive pile of wiring stuffed into the center fuselage.  To avoid that, the PCB is used to do all the “Y” connections.  It also directs BEC power to where it is needed. 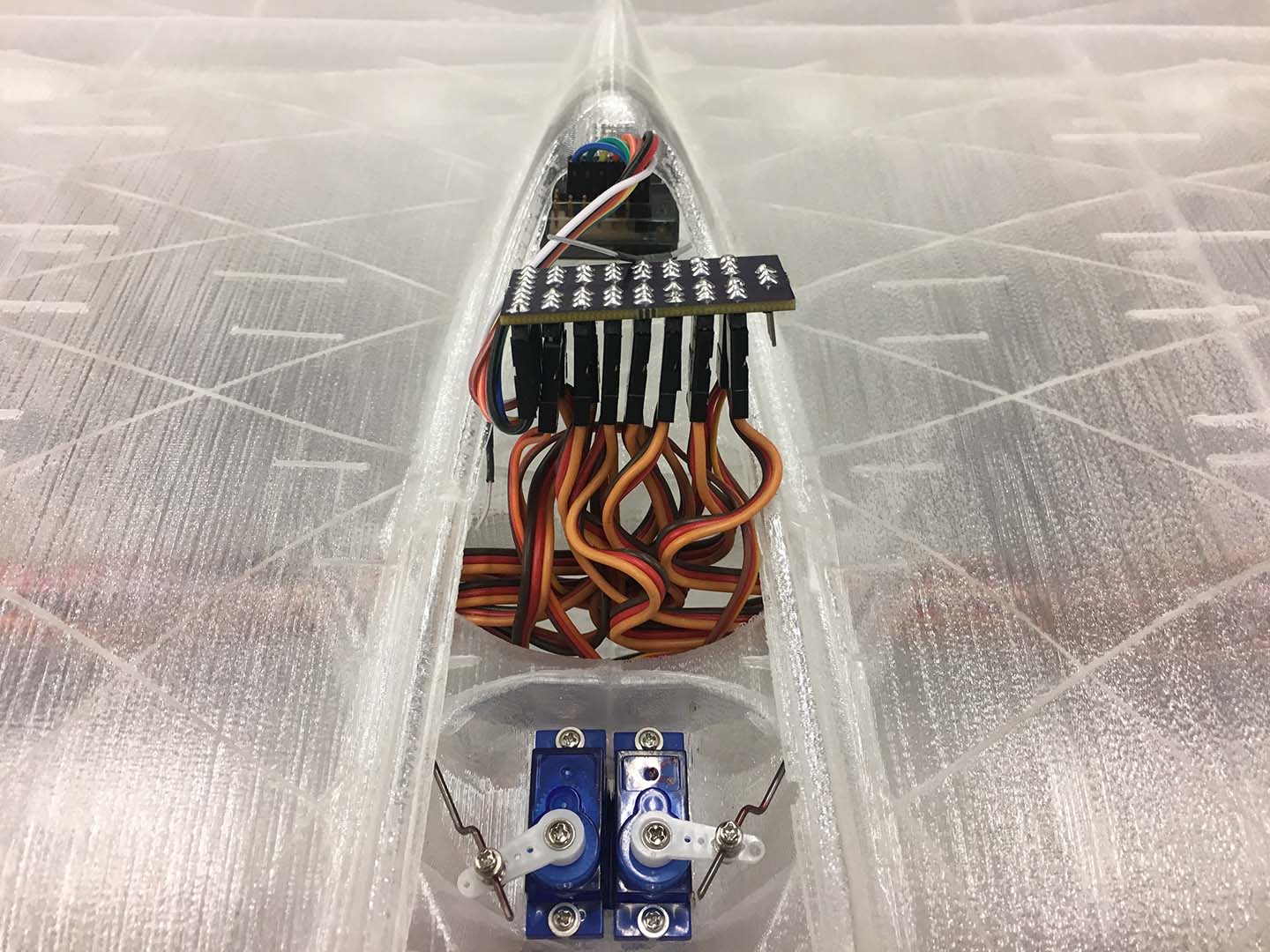 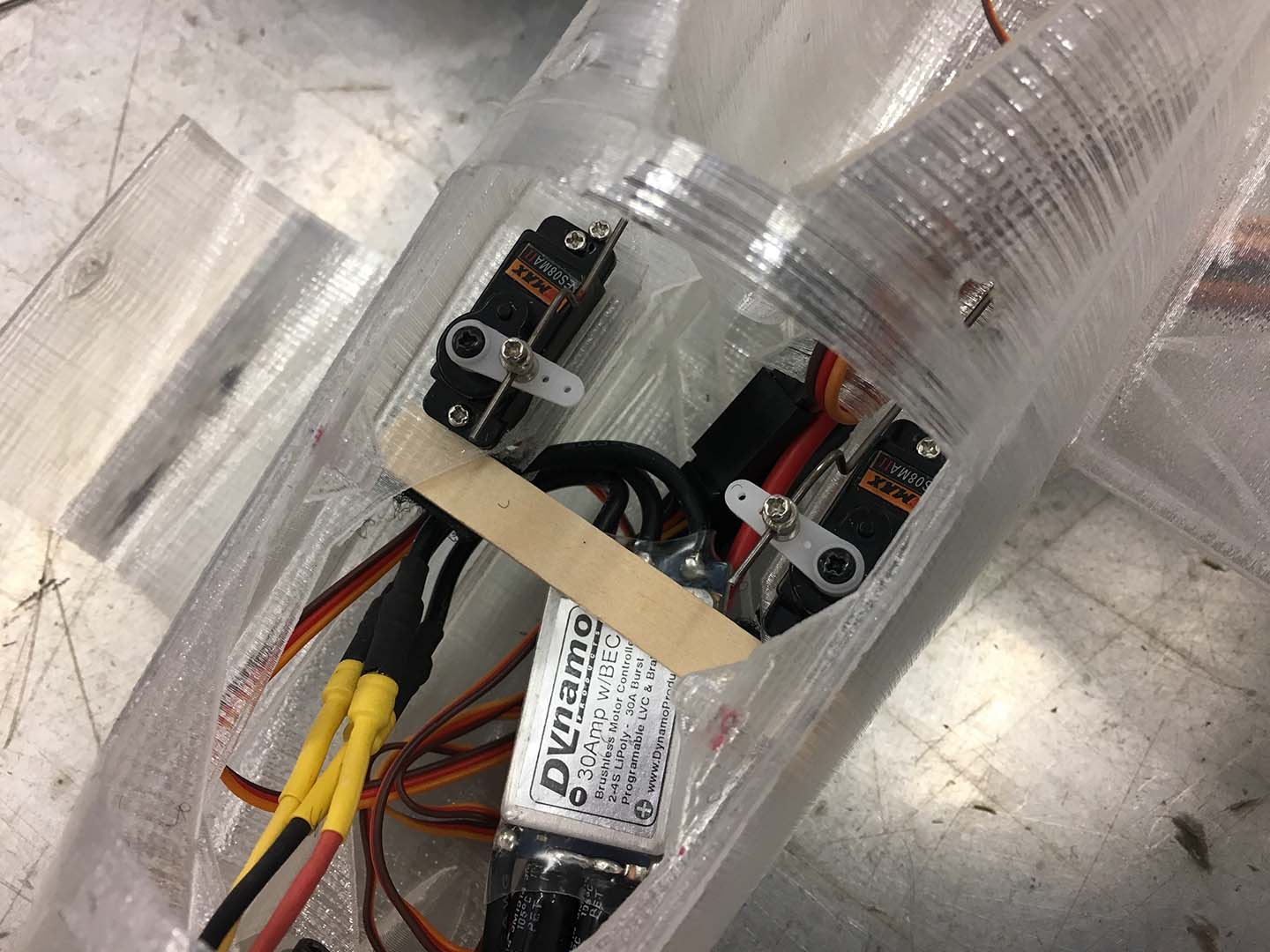 A craft stick is used to keep the ball of wiring and ESC in place in the nacelles. 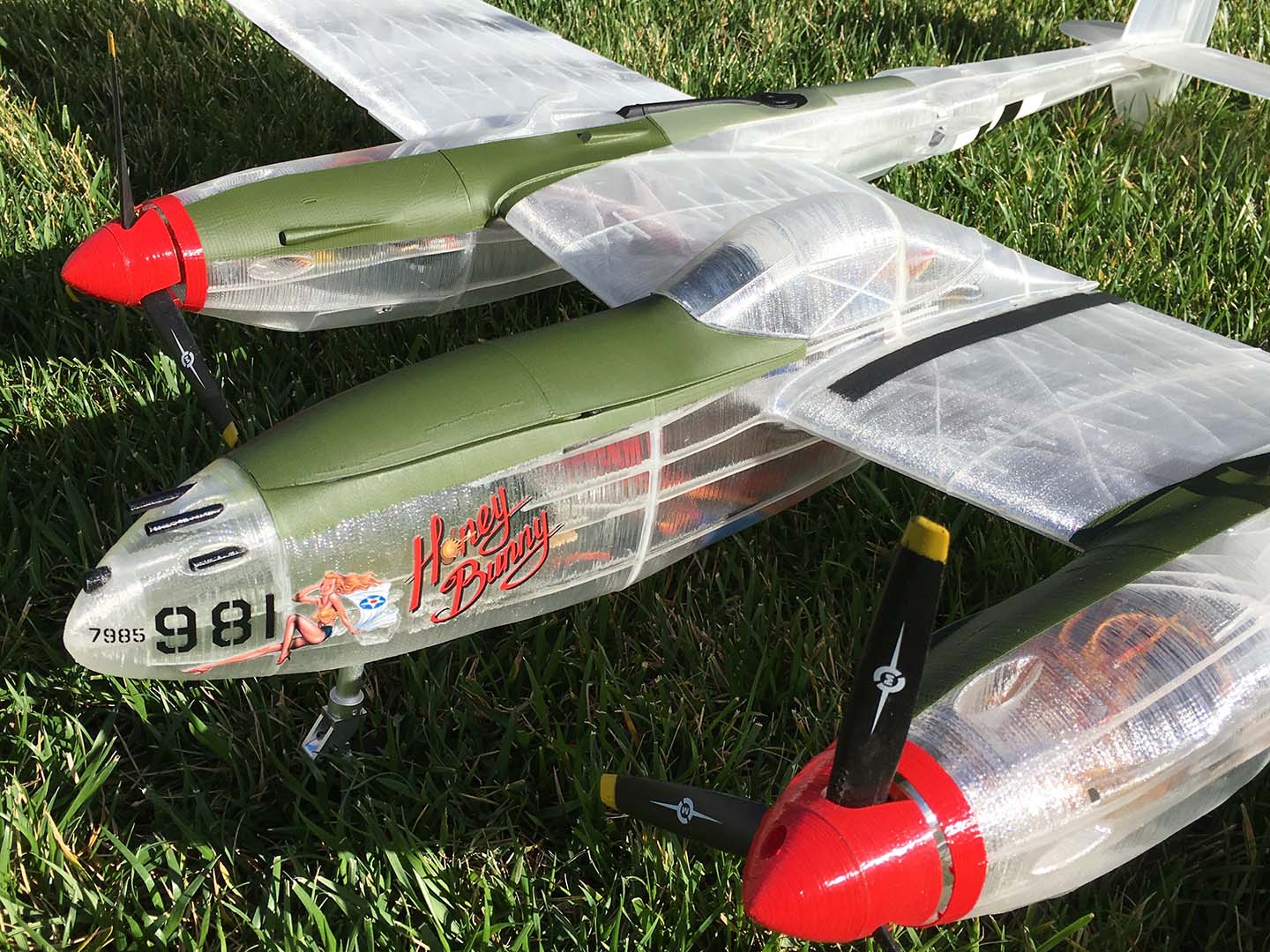 Close up of nose art. 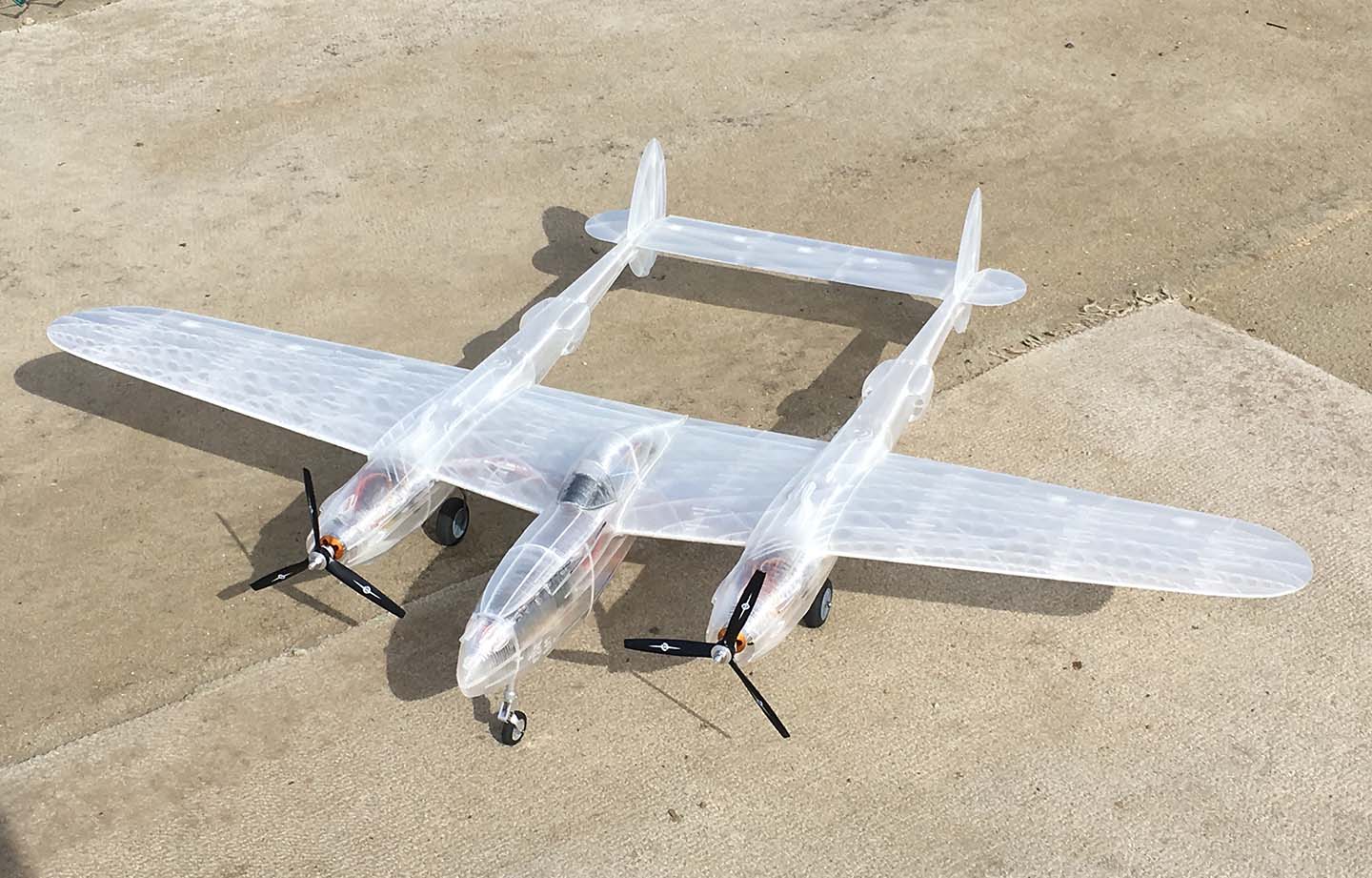 As it looked on its maiden flight. 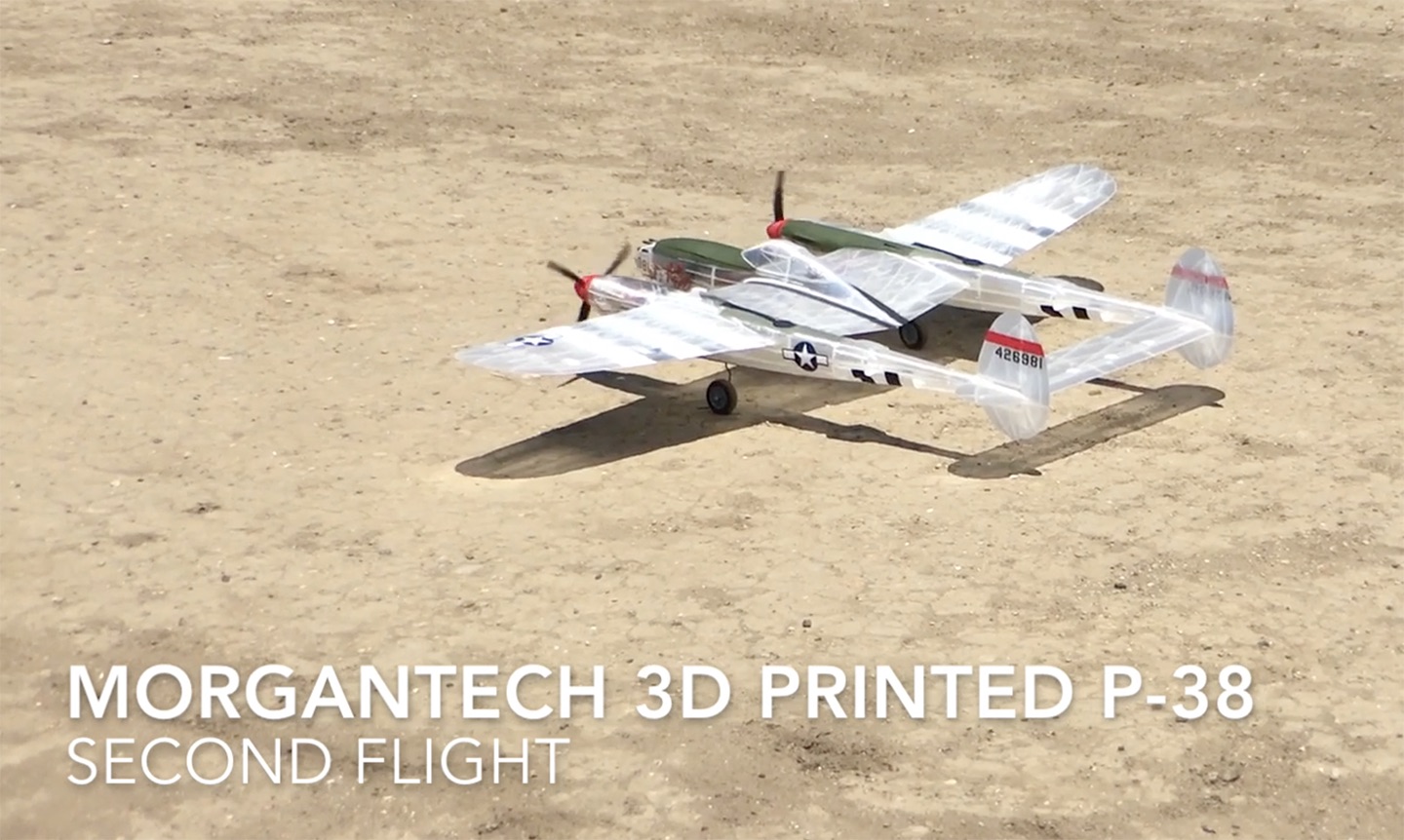 Click the pic for the video of the second flight.

Flying is comfortable.  It lifts off easily and goes exactly where you want.  Almost no trim was needed.  No flaps were used for the first and second flights.  I found I needed to add some flap-to-down-elevator mix.  This keeps it from ballooning.  Full flaps were used on the fourth and fifth flights which made for very slow touchdowns. 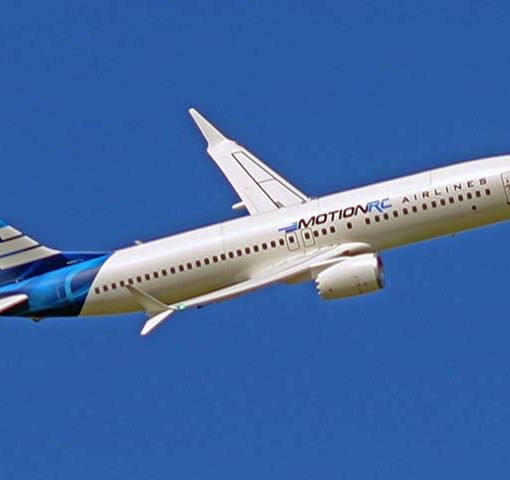 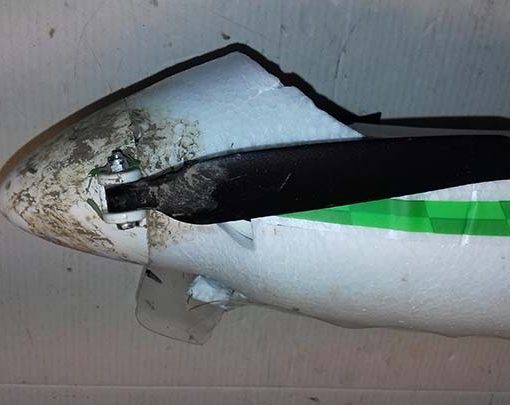 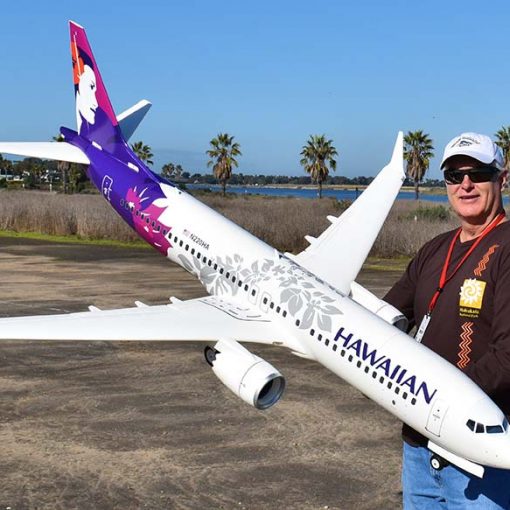 By Jovi Thanksgiving Day, all the relatives were in the kitchen helping out in prepping the turkey and the many other goodies […] 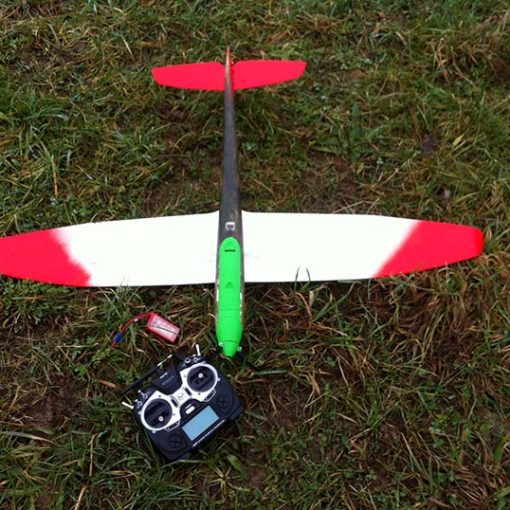