I hope you are having a great month! As we finish out April, I would like to make a few comments related to safe use of our site.

First, most of you have noticed the amount of new growth at our site due to the wet start to the year. In some places it is over 8 feet! This raises a few concerns. For those of you (like me) who suffer from pollen allergies, be sure to use your medication of choice before you head for the field, sneezing and watery eyes do not make you a successful pilot! Next, there has been a plethora of people coming off of the street to take pictures of the pretty flowers (weeds). People are all over the place, and we need to avoid flying over them with planes, or ‘taking a closer look’ with multi-rotors. Please give them the courtesy of safety. Also, all of this growth is going to raise our fire risk greatly. Last weekend I saw a couple of people grab extinguishers and run to a smoking aircraft. That is the response we need as we move into the summer. Thank you all for being vigilant!

Next, I need to touch on full scale aircraft in our vicinity. Under NO circumstances do we have the right of way when full scale are overhead. Yes, I understand they are not supposed to be below 500 feet. However, they are sometimes vectored through at 300 or 400 feet due to other concerns. We were reported to the tower at least twice this month, and need to get this under control. Please get to 50 feet or below any time there are full scale around. If you are practicing for an event that requires you to momentarily go above 400 feet, like electroglide or the F5 competitions, please ask someone to spot for you so you have another set of eyes looking out for issues.

Finally, take a few minutes to review and replace items as necessary in your first aid kits. We hope to never need them, but there are some items that expire. I ended up having to replace a large number of band aids that just wouldn’t stick due to age.

Membership is proceeding at a decent pace. We are a bit behind last year’s numbers, currently at 336 members. Not a surprise that things are a bit slow, we are not hosting drone day this year, so some of that member base did not show up. Keep looking for folks flying without a badge and encourage them to join the club. Remember that no one is allowed to fly at our site without AMA, and potential members (not prior members) are allowed 3 guest days with AMA before we require them to join the club.

I am still getting a lot of prior members asking for keys to the gate. We have NOT changed the lock, so you do not need a new key every year. From this month forward, keys will cost $2.00 unless you are a new member. Along with the privilege of having a key goes the responsibility to close the gate if you are the last one out. Almost every night this month the gate has been left open with no one around. This leaves us open to all sorts of bad things. PLEASE lock the gate!

Our fun fly on the 22nd will be altitude quest. A fun event that only requires you to fly to your designated altitude and land. $150.00 in gift certificates from Discount hobbies will be divided amongst the 5 pilots closest to their mark. This will be followed by lunch and a brief club meeting. Being discussed will be some fundraising ideas for the 4th of July event at the field. Without drone day, we are way behind where we were last year fund wise, and need to generate revenue to support our end of year banquet. It you have ideas – please share!

The pics this month are a few of the big Waco I picked up at Don Rice’s estate sale and had the honor of finishing. I am using one of Steve Neu’s new large outrunners, which pretty much prove the fact that there isn’t any plane that cannot be converted to electric power. At 54 (ish) pounds, it is the heaviest plane ever to fly from our field.

Have a great month!

P.S. Skip and Dave- I know you did scary things this month, I just let you off the hook…

Second launch had short flight times as well. The longest time aloft again going to Steve and Tom at 2:50 and 2:32 respectively. Only Tom picked up a landing credit (20-points), for that round .

Fourth and final launch found Tom Erickson above and alone from all the rest. With a flight time of 4:40 his closest competitor was Fred Daugherty at 3:20. Fred being the only pilot of that round earning a landing credit, 20-points.

Winner of the day is Tom Erickson with total points of 137. Second place goes to Fred Daugherty at 85 points. Third place is Stephen Treger at 79 points. Kudos for the day go to Tom for finding lift when others could not and Jim for keeping at it when the motor in his aircraft was so weak.

Next Electroglide is scheduled for May 20th. Until then let’s fix our airplanes, practice and hope for lift.

-Altitude related incident reported to Lindbergh on 4/1. Will discuss with member when full scale aircraft are nearby.

-Discussed member hovering over the runway. Board will talk to member.

-Safety Report: No major issues. Pay attention to your setup before you fly. Look into throttle lock.

-Port a potty is in bad shape.

-Discussed membership fees. Last price increase was in 2007. Increase is imminent. Will discuss at future meeting.

-Voted to approve $50 donation to AMA Scholarship foundation to reinstate our Gold Leader status for 2016 and 2017.

Randy took some wonderful pics of this year’s Super Bloom at Mission Bay.  Click the pic: 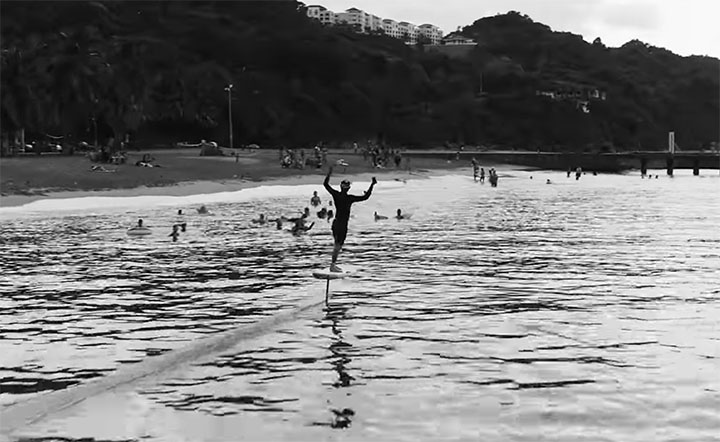 Check out the amazing Lift Foil powered by NeuMotors.