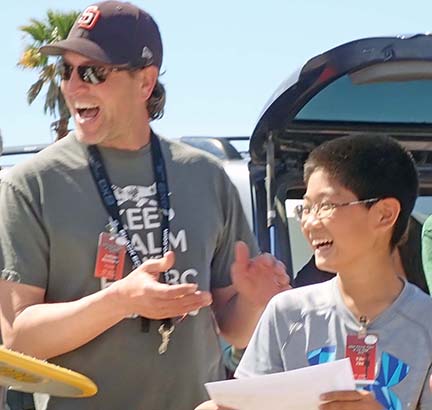 Another great month of flying has passed. I would like to remind everyone that this time of year we have shifting winds from east to west, so please fly the appropriate pattern. We have a new wind sock up so determining witch way the wind is coming from shouldn’t be too difficult. If you’re not comfortable looking at the wind sock during flight, then fly the same pattern as everyone else flying. We had a mid-air crash last week. There were only 2 pilots in the air and they were flying opposing patterns which is exciting, dangerous and expensive. Please be mindful of your fellow pilots and which direction the pattern is. Ultimately it’s your responsibility to keep your flight uneventful.
Just a friendly reminder to close and lock the gate when you are the last one leaving the site. We had a couple individuals try to use our site as a dumping ground. Fortunately, we did have a responsible member address the situation and the situation was cleared up with no incident.

Secondly, we had a member flying his quadcopter out of bounds, this is unacceptable. The flying boundaries at our site are to keep the public safe and also to give us a place to do what we like to do, and that’s fly RC. The member has been identified and if this continues we will have no other recourse than to suspend or terminate membership. As a club member you should know better than to fly out of bounds. We will not let the selfishness of one individual jeopardize a club of 300 that do fly within our boundaries. There are a lot of other places around the county if you want to go fly with no limits. Due to the proximity to the airport our site has limits. Please be respectful of your fellow pilots and fly within our boundaries. Don’t be that guy that has the club shut down because you wanted to fly out of bounds.

I respect and appreciate all of you and I wanted to thank all of you for a relatively drama free club. I look forward to continuing this great trend we have. I hope next month will be just as fun flying as this last one.

One of our easiest games to play, 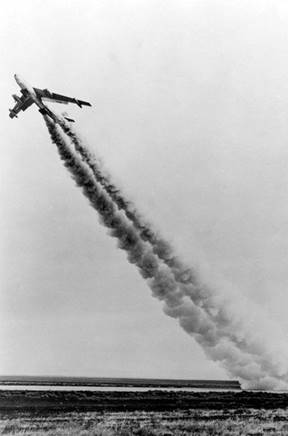 Simply spin the game spinner to get an altitude target,
then take off and try to fly your plane
as close to that altitude as possible.

We use the JollyLogic Altimeter One device
to see how close you get!
$150 in Prizes awarded, 1st through 5th place.

There will be a Broom & Blower sweep down
of the field just prior.
Bring brooms, blowers & flat-nose shovels.

Click the pick below to see more pics of the SEFSD Banner Flight by Larry Costa Jr.  He made the banner in his sign shop.  On the maiden flight he fried the Cub motor.  Both Cub and banner live to fly again. 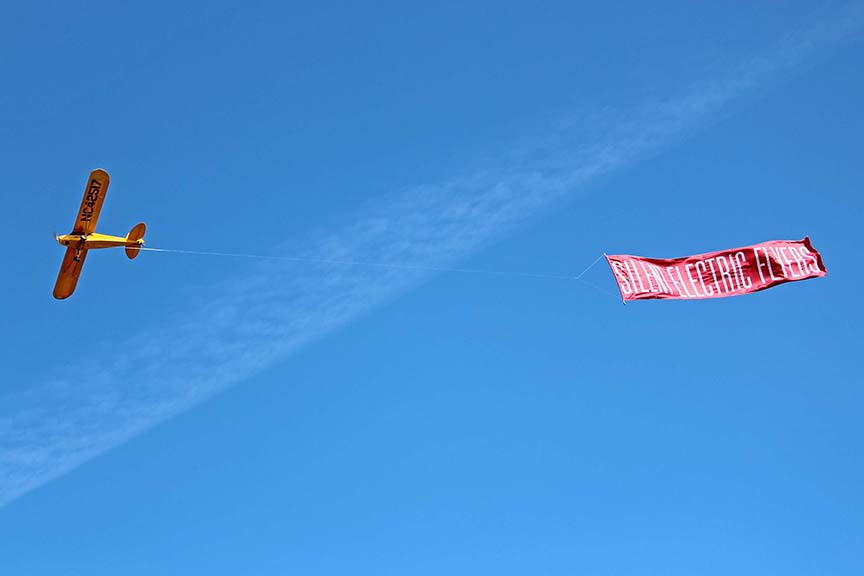 As a long time club member and your safety officer I get concerned when I see members taking a cavalier attitude in handling their electric powered models. People need to be aware that many of their “toy planes” have more power than the average lawn mower and can do similar damage to flesh with their spinning props. With the battery connected the only thing between you and a running motor are a couple microns of silicon and some computer code.

Some suggestions in no particular order are:
1) Treat a model with a battery plugged in (Armed) and propeller installed as loaded gun—stay behind the prop and don’t point it towards others—also stay out of the arc of the prop rotation.
2) Keep your friends, curious kids and the public at a safe distance when the model is ‘armed’.
3) Do the final ‘arming’ of the model only when you are at the fence line and are ready to taxi or launch your model
4) Never “taxi” your model in the pit area at any time—for multicopters that means no takeoffs from the pit area.
5) Turn off the RC system before bringing the model through the pit area after flying

In closing, please be careful and try to not get distracted when getting your model ready for flight—in my experience a large percentage of safety errors occur when you are working on your plane and talking with your friends—people really don’t multitask very well!

Click the pic for a video and some more pics of George’s creation.  As Randy says: “This is what you get when you find Popwings laying around the hood!!” 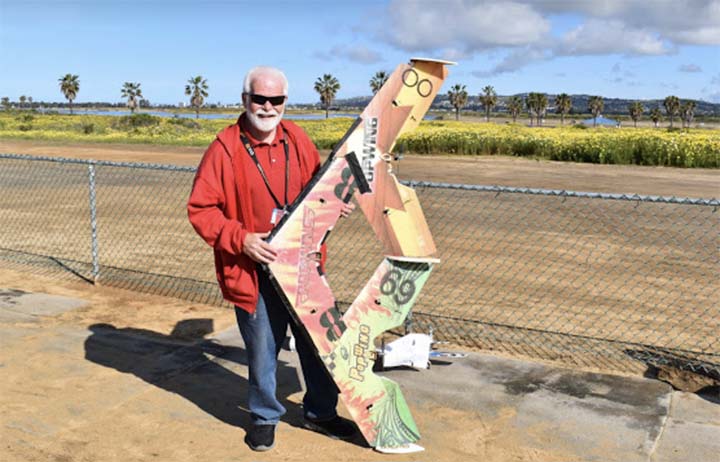 We had one fun Electroglide this month, beautiful weather and plenty of lift. The predicted weather was supposed to be partly cloudy with a south west wind of 12 mph and 67 degrees. What we had was partly cloudy with north west winds at 7 mph and enough sunlight shinning to create wonderful thermals.

At around 9:40 a.m., Dennis La Berge had his Radian up looking for potential lift. He found it just under 100 feet altitude and slightly north of our runway. The sun had been shining for a time, the winds were very light, so the thermal must have been generated by all the vegetation at our flying area. Hey, go green.

First launch was at 10 a.m. and ten aircraft took to the skies. Most of us headed to the western edge of our flight area. We didn’t have to search long as we quickly found solid lift. At least eight aircraft were working a very broad lift when a full-sized helicopter came roaring through from the west. We all had to drop altitude quickly and it was decided to restart the first launch.

The wind had started to pick up, and by the time we relaunched, the lift was no longer in the same spot.

The weather gave us great flying conditions that was enjoyed by all. Landing conditions however were a bit tricky, so it was nice to see many pilots scoring extra points by landing in the target circles.

Thanks to Frank Sutton for providing wonderful pictures of the event.

Next Electroglide is scheduled for May 18th 10 a.m. first launch.

For this month’s meeting we talked about Jim becoming the liaison for the rotorplex.  We thank you for stepping up.   Two wind socks were bought to replace and or ad to the field.

We are also working on an article for the AMA magazine.  As the second largest district and 4th largest club, with 289 members, we should have more articles and mentions in the AMA magazine.

The bathroom lock keeps going missing.  We approved a GPS tracking system to follow its whereabouts.  Just kidding, we are going to install a chain.  Long enough to bring inside for those of us who have seen too many prank videos.

We approved fixing 3 tables.  Please do not sit on the tables.

We also talked about the AMA rules about instructing your non-AMA friends at the field.  If you have a buddy box and or are standing next to your friend and you are the Pilot in Command, you are allowed to let your friend take the controls.  However, if your friend is going to be the Pilot in Command you cannot share your AMA with him or her.  There is an AMA workaround.  Look into getting an AMA IP instructor ad-on.

We also discussed putting some of the clubs money in an interest earning account, instead of just sitting in a checking account.

We are on budget with everything this year, and to be even better. we have volunteered George to handle the raffle sales this year.  Personal or virtual, George will take your money and handle all the logistics.

We the Board of Directors thank you, the members for making this the great club it is. 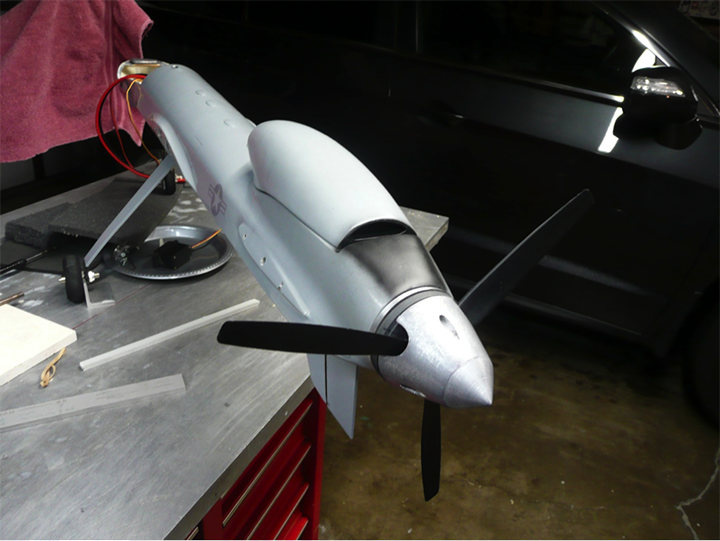 I mounted the motor finally!

I did it the hard way so if you want to do it your way it might be best. I did get the motor and spinner mounted well enough as an assembly so the result is flyable.

I used a 3d printed spinner thanks to ‘donandthereasa’ at rcgroups. Thanks! It took some work to get it to run true but it’s worth it. The spun aluminum finish took me 3 times to even get it to this point. (still needs another try)

The tricky part was making the motor spacer. Some nice person reported that this plane needed some right thrust. (imagine that…)  So I put a tapered aluminum spacer plate between the fiberglass mount and the spinner. Matching up the thrust offset of the aluminum spacer and the motor spacer took a lot of time to get it right. The M3 x 16 screws are hard to get. 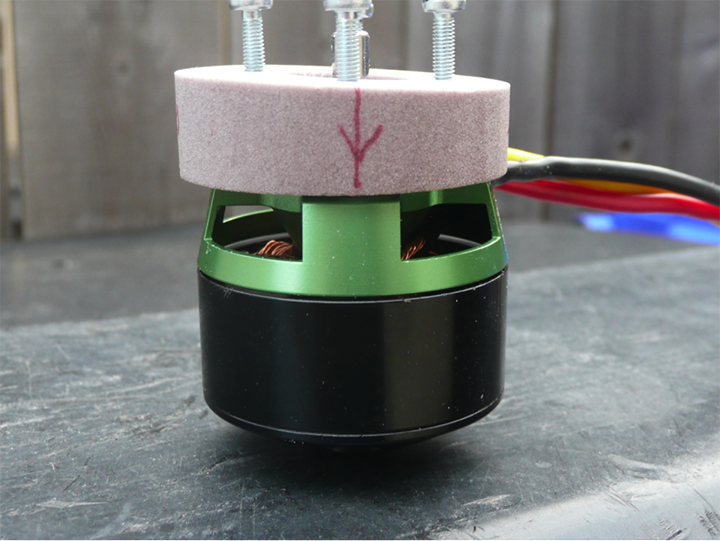 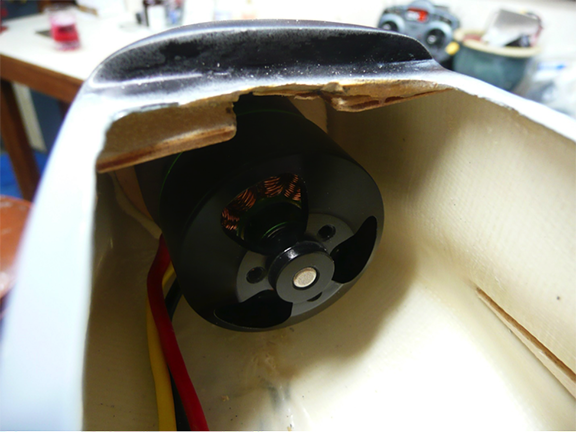 If I recall I used a Cobra 3520 from Lucien at Innov8tiveDesigns.com. Nice quality motor in my opinion. That nice motor is mounted on the EXACT opposite of the nose of the aircraft. So, the weight of the battery must be accounted for in the weight-and-balance sheet. I found a 4S 2200 MaH battery to balance about right. Light motor, light battery. 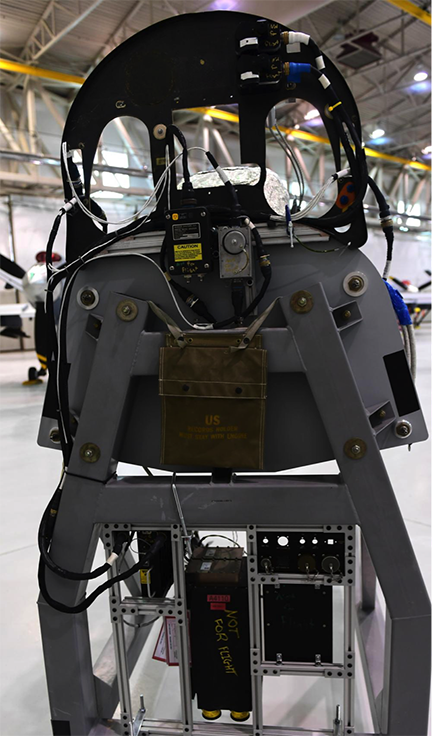 The lead-in picture is the back side of a motor mount stand used for  servicing.  It was bizarre enough that I found it interesting.  (but that’s me…)