As we were packing up, Jesse called my attention to a guy with a co-ax heli he wanted $20 for.  I bought it, came home, and sorta went insane. This receiver is three-channel with twin motor output, esc and a gyro that controls rpm to stabilize in the yaw axis (see below). The digital servos weigh just over 5 grams. Two 1200 mA single cell lipos (my 30 mm edf could use these (peanut scale Skyray, anyone?) The frame and motors could easily be modded to a contra-rotating set-up for an airplane. It also came with a Walkera 2.4 ghz, 4-channel transmitter bound to the receiver. I sorta took it all apart.

Here’s the plan for the receiver and servos. I think it’s feasible to build  a twin pusher, flying wing that would have built-in yaw stabilization controlled my motor rpm. It really wouldn’t need a rudder.The transmitter doesn’t have computer mixing for the elevons but I can do that mechanically.

N-1M: the first Northrop flying wing (this may be the one … less scale detail and no rudder). 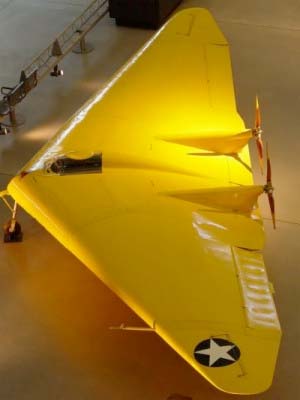 I’m gonna need a bathroom in my garage.

Now that I have completed the top section it is time to move to building up the lower section of the fuselage.  […]

Framing the fuselage Top:  Fun part about building Top Flite kits is that you build right off the drawings. Got wax paper, […]

By Jovi Murek Hello Club members, Here I am getting ready to start to build the DC-3.  Starting off with the tail […]