In 2009 I built a 1/12 scale model (28 inch wingspan), using 6mm foam sheet for wings and 3mm for tail, carbon tube for the booms, foam block for the nacelle base and nose, and formed card for the nacelle cover. I put a scale pilot and Lewis gun in the cockpit. The 3S 1500 mAH battery extends under the pilot (where his legs would have been), the AXI 2208/34 motor driving an 8 x 4 prop is outside the rear of the nacelle, and between the pilot and the motor mount are 3 HS55 servos, both parts of a Spektrum 6 channel receiver with one antenna extending sideways, the other fore and aft, and a 10A speed controller.  It is a very tight fit; total flying weight 15.5 oz.

Inter-wing and inter-boom struts are balsa, landing gear is wire (and braced by cord from the front of the nacelle), and the wheels were originally sold as spares for a Neiuport. Those were light — too light, made of 0.016″ vacuum-formed plastic without a hub — and have been replaced by wheels built up out of the same foam used for wings and tail, with a plastic tube hub. The bracing wires are 0.020″ carbon fiber rod.

The aileron servo extends below the lower wing to drive push-pull rods going out to bell cranks near the aileron centers. The rudder and elevator servos each work pull-pull cords, each pair going out laterally as far as the vertical wing strut where the booms meet the wing and then through wire guide rings mounted on the boom struts to serve either rudder or elevator. The cords are set and tightened by tiny transparent sliders.

I first flew the DH2 in the fall of 2009, and felt that it was very difficult to fly, although its log book says that I had got as far as checking spin recovery as satisfactory. Then I put it in the hangar as being just too difficult. I looked at it every once in a while, promising myself to make another try, and each time delayed. Now, in January 2012, I took it out to the field. While waiting in the hangar that plane had matured into what history records as its later characteristics of being maneuverable and easy to fly. I flew circles and lazy eights and felt in complete control.

I had another perfect flight today, 8 minutes, doing some loops and spins as well. But the foam wheels that I built did not have a sufficiently strong connection to the plastic tube hub, which connection broke loose on landing, even though that was quite gentle. I have to make wheel hubs of wood, or similar, with the tube bearing inside, but large enough outside to have a large-area connection between the hub and the foam. 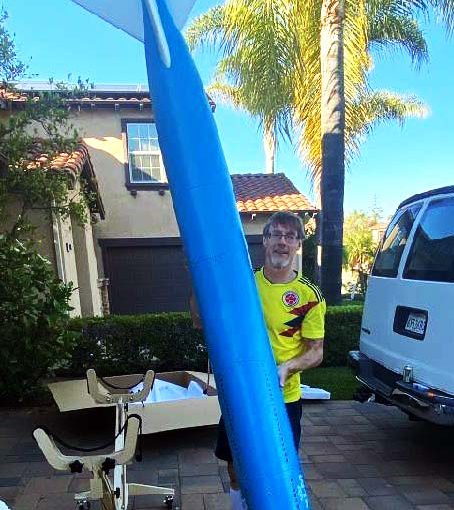