Framing the fuselage Top:  Fun part about building Top Flite kits is that you build right off the drawings. Got wax paper, laid it down and I grabbed all the formers including grooved main stringers.  These two stringers I soaked them in water to create the fit of the curve for the nose of the aircraft.  Pinned it to the board and let it sit.  I also installed the cabin crutch to help form the main stringers.  Once that was done, I then completed pinning down the stringers to fit the drawing.   Next was to place the formers into place just to fit, but not yet glued in place.  Here is where I had to create a hatch for the battery, instead of taking the wings off like I have to do with my Cessna. I replaced two formers.  The formers that come with the kit are 1/8” So I will be replacing them with a ¼ “thick.  These two formers will be used for the opening of the hatch.  The formers that came with the kit are going to be used for the hatch as you will see in this process.

Without a modern passenger plane.  TWA was not about to let United Air Lines corner the entire market with Boeing’s 247.  TWA initiated a program of their own to develop a modern airliner.  Douglas responded with the most advanced and the most controversial design, namely DC-1.  TWA ordered one unit and in 1933 the first DC-1 rolled off the assembly line in Santa Monica, California.  The DC-1 was bigger and sleeker than any other liner in the industry, including Boeings Model 247! 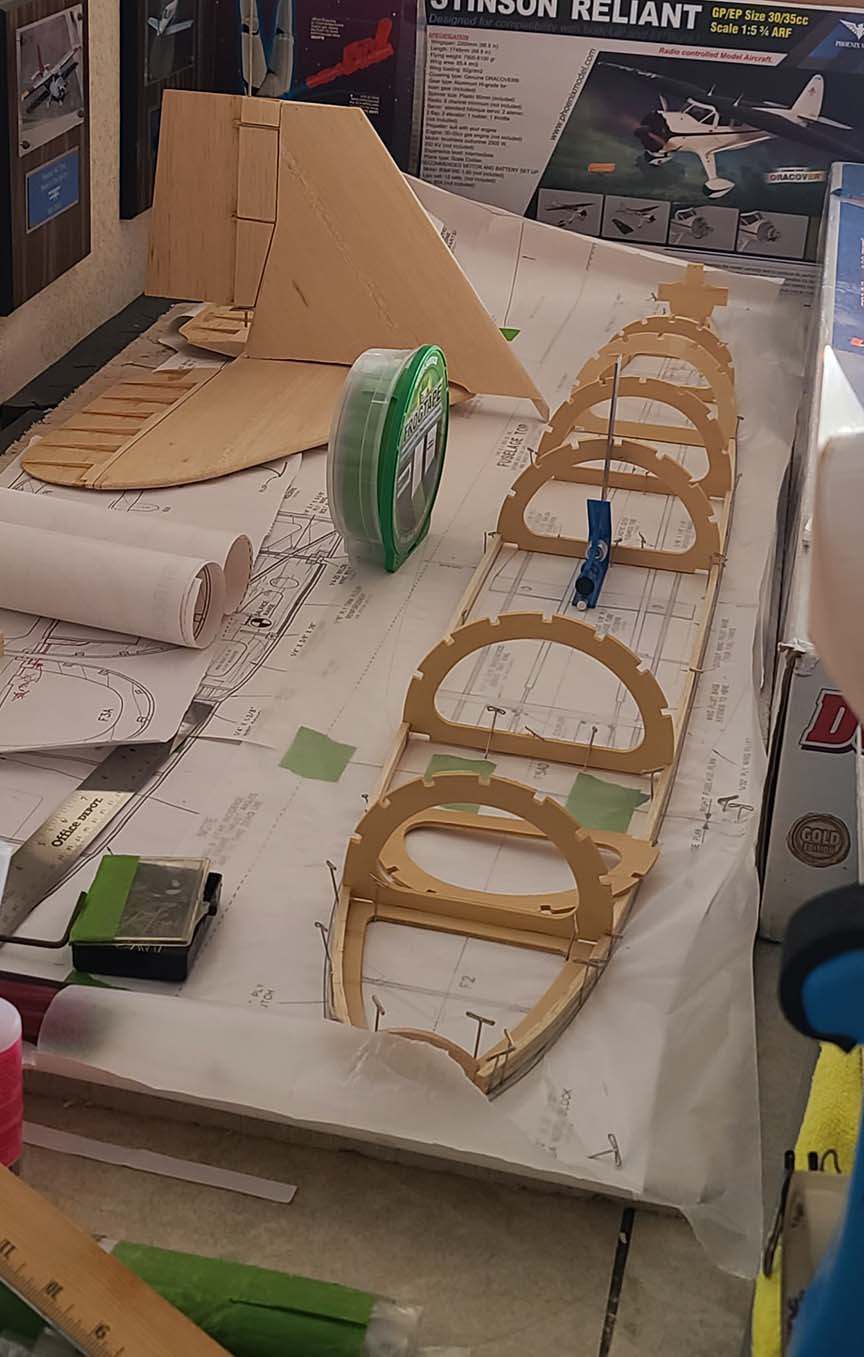 As you can see in the above photo how the formers were fitted into position.  Starting with the nose of the aircraft is where I started to glue the formers in position.  For the hatch section as I mentioned I am changing the formers with ¼ “thick.  I then cut the two original formers and glued the lower section to the replacement ¼ “formers.  The top half will make up the hatch.  In between the two ¼” formers I cut the middle former to match the hatch and the bottom part, I cut out the middle and only used the sides, also show in the photo. 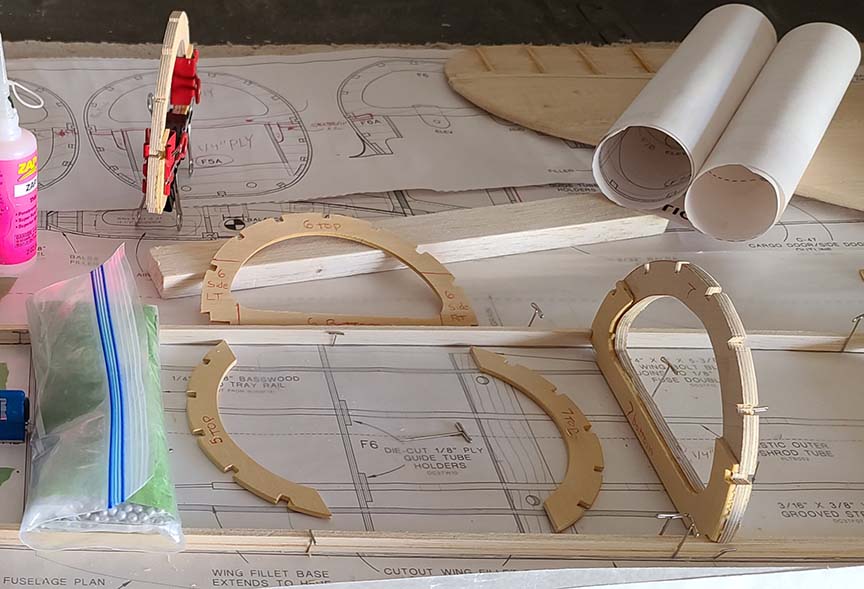 Once all parts we modified I stated to build the hatch and used 3/16 square stringers and using binder clips to hold the position correctly. 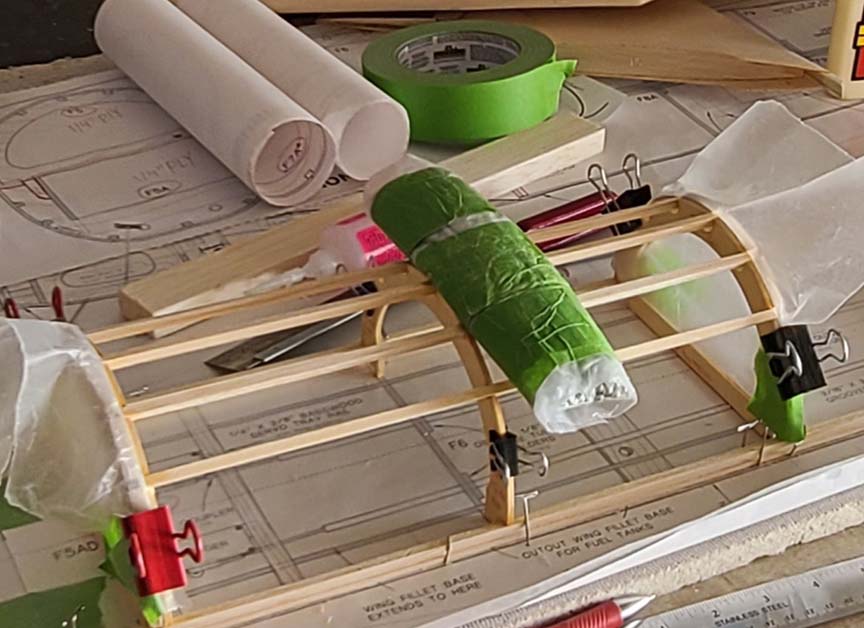 Now that we got the hatch constructed it was time add the Stab saddle at the tail section.

I then added the two Stab saddles to the aft of the fuselage and added skin Then I added some skin to the lower sides of the fuselage from the nose to the Stab.  Then just to make sure all was fitting right; I placed the Stab into position alone with the Fin.

I removed the fin and took my incidence meter to check to see if I had a +1 degree on the stab.

Perfect!  Now it was time to glue the Stab into position and in doing so I also had to check that it would be mounted straight and even.  To this I took a string from the nose and back to each side of the Stab to make sure it was even.  Before I glued the Stab in place, I had to drill a hole thru the Stab to include the Rudder Torque Rod and once that was done, I had to bend 90 degrees to the hinge line (or parallel to the rudder ribs)

Once the Stab had cured, it was time to add the Fin to the fuselage.

A recheck was done one more time to confirm that all was aligned and had the correct incedence on the Stab and it did!

Probably the greatest contributing factor to the acceptance of the DC-1 by TWA officials (and a subsequent purchase order for twenty more “improved” versions-the DC-2) was the ability of the DC-1 to take off on a single engine!  TWA paid Douglas $125,000 for the first DC-1, though it cost Douglas $807,000 to build.

Now that the Rudder and Stab are cured on the top half of the fuselage, it was time to add the stringer.

Now that, that’s completed it was time to start skinning the fuselage.  Here I started with the tail section and moved to the nose.  This step took time to complete.  I had to wet the balsa wood to allow it to bend in the shape that I needed.  So, with the stab I cut the wood into the shape that was needed, got it wet with water and then placed it into position and added weights to help form the shape.

Once the wood had dried, I removed from the DC-3.

I then continued to skin the top section of the fuselage as shown.

The Hatch.   First, I had to reinforce the inside of the fuselage to accommodate this section for its modification from the original design to add strength.

Here are the two reinforcements to be added inside the fuselage. At the same time, I added the hatch hold down blocks

Everything is coming together as planned.

It was not long before the U.S. military became interested in the DC-1.  The Army Air Corps had a need for a modern cargo/troop transport aircraft.  Although impressed with the DC-1 after test pilots put it through its paces, the military opted to wait for the improved DC-2 before placing orders.