Hello Club members, Here I am getting ready to start to build the DC-3.  Starting off with the tail section of the aircraft.  The first part was to make the skins.  Here I took two sheets of 1/16 x 3 x 30 and glued the two sheets to together so the outcome would be 1/16 x 6 x 30.  I created three sheets, two for the stab and one for the fin and rudder.  Now starts the fun part, building!   Now that we have gotten the skins ready, I’m starting to build the Stabilizer.  As show in the picture I have all the parts laid out on the building board and preassembled them before gluing them into position. 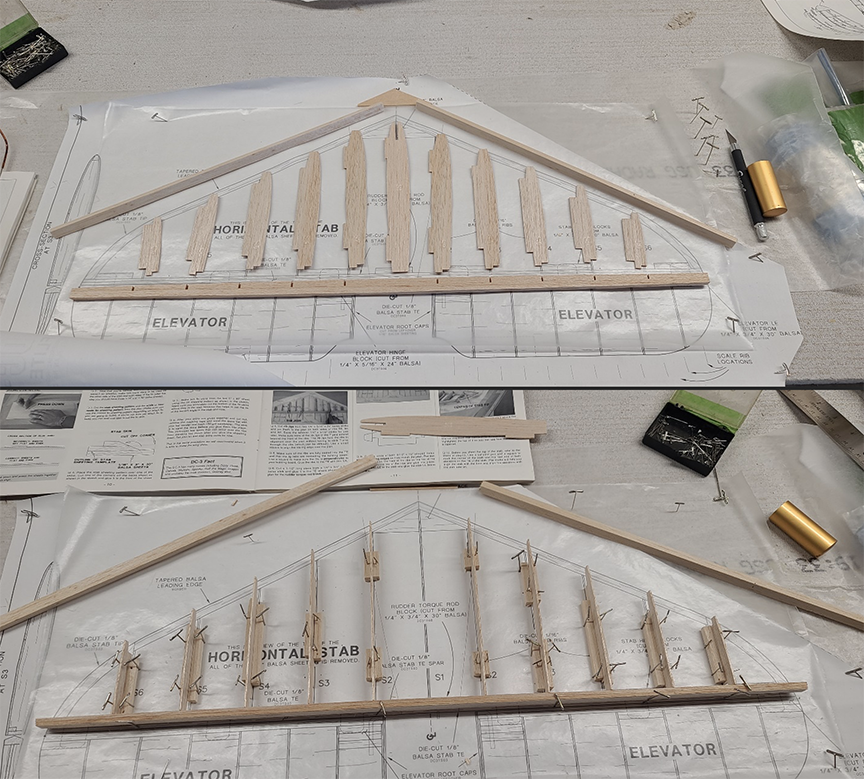 After presiding over various projects including the Matin MB-2 bomber at the Glenn L. Martin aircraft company, Donald W. Douglas Jr, born April 6, 1892, co-founder the Davis-Douglas Aircraft Company in the spring of 1920 with help from David Davis, a millionaire with a great desire to fly.  By the mid 20’s Douglas designs were well known throughout both the civilian and military aircraft industry.

Using a square to make sure that when I glue the ribs and LE (Leading Edge) perpendicular to the elevator core.  Once completed I am ready to sheet the top section of the Stab.  Once the skin has cured, I then installed the hinge blocks inside the Stab.  Then I covered the bottom side of the Stab with skin.  Building the Elevators:  Mark the location of the elevator ribs on both sides of one of the die-cut 3/32” balsa elevator cores were shown on the plans.  Then I cut the remainder of the ¼” x ¾” balsa stick I used for the hinge blocks when building the stab.  I then added the hinge blocks to the elevator and sanded them into the shape.

I built the Fin just like I built the Stab, laid out all the parts and pined them to the plans.  Using a straight edge to make sure the ribs are aligned the correct way.  I am building the scale fin and rudder while retaining the distinctive DC-3 outline.

By the late 20’s the air transportation industry was rapidly expanding with small airline companies springing up everywhere.  Though major players such as United, Transcontinental, Western and American Airlines were well established, the aircraft they used featured metal skinned, wooden framed construction-technology leftover from WWI aircraft.  This set the stage for the demand for an aircraft that would serve the growing industry.  Whichever aircraft that would be was surely destined to become famous.

Building the fin and rudder took longer than expected, due to the time-consuming task to cut and build the scale fin.  The rudder also took a little extra time to make sure that the bass rod was position in the right place.  See Photo for how it was all put together.  Here I had to make sure the hinges and hinge tube will align with the plan. It was necessary to trim parts of the TE (Trailing Edge) sections for a better fit.  I also used some 3/32” x 7/16” x 24”, (cut what I needed) to shim up the hinge tube near the top and bottom hinges.  This will hold the tube level and align the fin hinges with the fin.  Making sure with the straight edge and verify that the hinge tube was level.

Now that the fin and rudder have been glued together, I am at the point to skin the fin.   Today, 2022-03-07 I will cover the other side of the fin and finish up on the construction of the rudder.

Why the skins were curing, I stated to work on the hinges for the Stab and Elevators, however, as I was working on the Stab to create the slots for the hinges, I had to open one hinge slot and it was at the tip of the stab, all I needed was to open it a very small amount, well I put to much pressure and  I got my finger in the way……4 stitches later we are back to building.

In the early 20’s the airline industry giants announced that the call was out for an airplane that could satisfy the demands of the growing airline industry.  Boeing was first to answer that call with an all metal, twin engine monoplane named the Model 247.  United Airlines ordered sixty 247’s locking up the entire Boeing assembly line.  The result was that other airlines would have to wait until the United contract was fulfilled before they could “get in on the action.”

I am very close now in having Stabilizer, Fin and Rudder completed.

In my next month newsletter (Chapter 2, Fuselage) will have the fuselage and the new modification to the fuselage to accommodate the access hatch.