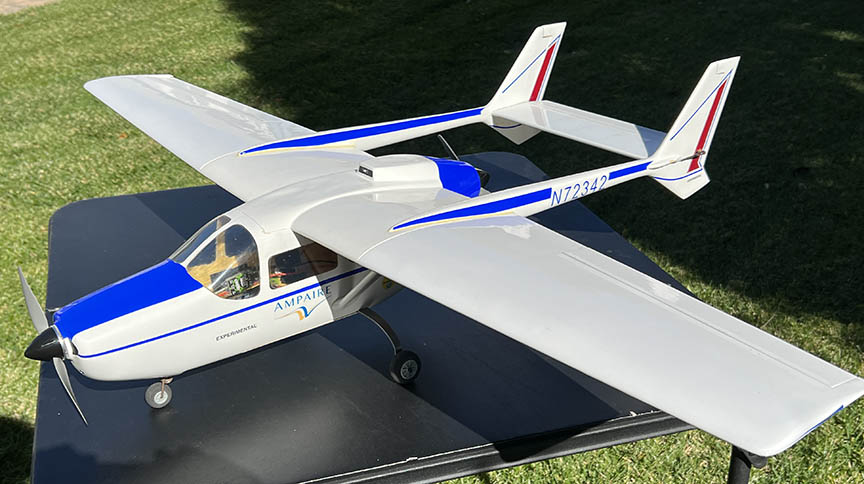 This will be a brief description of my JR Models ARF Cessna Skymaster build.  Although the kit was made in the mid-90s, in the Czech Republic, I only built it in 2021.  I bought it from Fred Harris many years ago at one of our club swap meets, along with the JR Models Mosquito I built and wrote about previously.

I took no pictures during the build so I’ll supplement with pictures from the finished plane.

First, I present the highly detailed and thoroughly informative instructions.  Yup, that’s it, all you get.  Much creativity was needed putting this plane together.  Although the instructions were minimal, the fiberglass work and wing builds were exceptional.  The equipment placements shown are a mere suggestion which I mostly ignored.

The main fiberglass parts of the kit are shown on the drawing near the title box.  You can see a fuselage with stub wings and two tail booms with rudders.  The wings and horizontal stab are prebuilt out of balsa and covered.  A hardware package was included.  Formed windows and landing gear were also supplied.

This plane was designed to be powered by two Speed 400 brushed motors.  That would only give the plane about 100 Watts of total power.  I wanted to use more like 300-400 Watts of brushless motors.  The wings did not have any kind of spar, just ribs and balsa sheeting.  This required more substantial wing joiners than the short pieces of brass tube supplied.  I used much longer carbon tubes.  To get them further into the wing structure, I needed make holes in two more of the ribs.  I sawed teeth on the end of the carbon tube and used it like a hole saw to drill through the ribs.  Slow going but it worked.  The longer joiners also made it possible to have the wings removable.  Tape was wrapped around the carbon joiners in a couple places since they were too small for the holes in the fuselage.

The wing servos were a simple job to install.  Hinge tape was used to attach the ailerons.

The chosen power system is as follows:

The total power out is about 400Watts (four times what it would have had with the Speed 400 motors).  It gives about 4 1/2 minutes of flight at partial throttle.

One motor is mounted at each end of the fuselage.  First I drilled a hole for the motor shaft.  Then I found that the back side (inside) of each mount was loaded with excess fiberglass chunks from when the two halves were assembled.  This had to be removed before the motor could sit properly against the back of the mount area.  Plus, there needed to be 1/4″ thick plywood glued in between the mount and the motors for spacing.

Cleaning off the excess fiberglass material was done by using a Dremel with a disc sander.  That part seems easy until you try to add a human hand, all through the bottom hatch access.  Place the Dremel in first, add hand, fumble around to grip the Dremel, try to turn it on, aim it toward the back of the mount area, try to keep the sanding disc flat against a surface you now cannot see, sand, sand, sand, turn off, remove hand and Dremel and see how much damage you did.  Repeated many times until all the excess fiberglass was removed.

At this point the back side of the mount areas are definitely not flat or even but the excess chunks are gone.  That is OK since I needed to add the 1/4″ ply spacers.  But how to get the spacers installed so they will allow the motors to sit squarely and evenly?

I created this tool to help get the 1/4″ plywood spacers on parallel to the external mount surface.  The shaft went snugly through the hole in the ply spacer (no wobble).  The spacer was a simple washer shape that sat flush with the washer on the tool.  The tool, with spacer, was then pulled through the fuselage motor mount hole, from the inside, and the tool shaft held square to the external mount surface.  Epoxy was used to secure the spacer to the fuselage.  The four motor mounting holes were then drilled and countersunk for the four motor mounting screws.

The elevator and rudder servos were challenging to install as they went inside the fuselage.  A lot of planning went into this.  I made special mounts out of hardwood.  (These custom mounts, like many of the parts of this plane are secured with Loctite EA 9462 Hysol.  This is a great epoxy to use for this work.  It comes in a cartridge, mixes in a long nozzle and does not sag.)

The servos needed to be lying down, accessible, adjustable, and removable.  This was the most difficult servo installation I have done.  I needed hands the size of my grand daughter’s.  The cable and sheath system needs to have as gentle bends as possible to minimize friction and to maximize control centering.  I used Sullivan Gold-N-Cable.  I chose a simpler arc for the cable than is shown on the plans.

A plywood piece is attached over the elevator servo for the simple task of providing a place to wrap extra servo wires.  Velcro was used to secure receiver, ESCs and wires etc.  All this could only have been done before any of the windows were installed.  I needed the access.

The on/off switch was mounted in the air intake on top of the wing.

The kit made no provisions for a steerable nose gear.  Only the coiled strut and a block were supplied.  A hardwood block was glued in where the nose gear mounts.  A hole was drilled in the block.  The strut was installed with a short piece of tubing and a washer to keep the coiled part from rubbing the bottom of the fuselage.

On the inside: a wheel collar, a long set screw and plastic aileron horn were used to make a steering control arm.  The steering servo was attached to the underside of the battery tray.

Two wood rails were glued to the inside of the fuselage to support the battery tray plywood.  A strip of Velcro was added to the top and the tray was complete.

A couple pieces of plywood were glued in to back up the main landing gear mount.  This was important to keep the landing stresses off the fiberglass fuselage.  This plane was built very lightly since it was intended for such low power.  The fiberglassing on the fuselage was very thin in some places.  I added a few layers of 6 oz. cloth and laminating epoxy to strengthen some wobbly areas.  This made a big improvement.

The hatch was fitted with a hook and magnets to secure it.  It was also reinforced with glass and carbon making it much stiffer.  The two bulkheads help keep the shape.

The rudders needed to be created by cutting them out from the tail booms.  A Dremel and a carbide cut off wheel are good for this.  Of course the booms and rudders are hollow.  Once opened up, the trailing edge of the vertical stabilizers and the leading edges of the rudders need to be filled with balsa to make them solid.  Having done that the rudders were attached using hinge tape.  Holes were created for my plywood control horns and were glued in.

The tail booms were made of fiberglass and, like the fuselage, were very thin.  I could just see them easily breaking.  I glued a 3/16″ carbon tube to the inside of each boom nearly full length.  This probably quadrupled their strength with only a modest weight increase.

Mounting the tail booms was a complicated process.  First the mouth of the booms needed to be sized to fit the wing profiles.  This meant carving away some of the opening and doing a lot of test fitting.  After the fit was good and the booms were parallel, I needed to mount the horizontal stab.

The Horizontal stab mounts through the inboard wall of the tail booms.  Again, the Dremel was used to open that up.  Balsa reinforcement blocks were added to the insides of the booms at the openings to reinforce the connection between the horizontal stab and the boom.

This was a careful process where I need to keep all parts aligned and square in three dimensions while the glue dried.  The booms were glued to the wing, the H stab was glued to the booms, the rudder and elevator control cables were routed through the booms to the tail, all at the same time.  Fortunately, it came out good.

The control cables were attached to the servos and control horns.  The wheels were fitted and bolted on.

Fast forward to October 2022.  I had always wanted to put on a nice paint scheme but put it off.  Now it was time to make the “Mixmaster” look pretty.

While looking at paint scheme ideas on the web I noticed a particular one belonging to Ampair.  This is a company who makes hybrids out of Skymasters: the original gas engine stays in front and the rear engine is replaced with an electric motor.  Perfect!  Of course, I had to do them one better and use TWO electric motors in mine. . .

I used only blue 3M Oracal 751 cast vinyl, red 3M Oracal 651 calendared vinyl and laser printed stickers I made myself.  The vinyl was really nice to work with.  Most all the pieces were cut out with a straight edge and knife.  The “N” numbers and the thin strips on the tail were cut out by my wife on her Cricut machine.  The blue cast vinyl is very good at going around compound curves.  It stretches nicely and responds well to a little heat.

The stickers were printed on Avery Clear Glossy Sticker Project Paper.  The graphics for the various images/logos were obtained from various online locations, modified in Photoshop and printed to size.

You may notice on the plans where it gives you a dimension from the leading edge to the Center of Gravity of 72mm.  Don’t you believe it!  After I marked their CG location on the wing, I thought it looked way too far aft.  I was correct.  Taking the measurements and running them through the CG calculator, I found the correct CG was only 55mm from the leading edge.  That difference of 17mm is huge and would have made the plane impossible to fly.  I have to imagine that a lot of these models crashed on their maiden flights.

The first and second flights went very well.  Little trim was needed and it handled nicely.  It had plenty of power.  One of the motor screws came loose at the end of the second flight and caught in the back of the front spinner creating an ‘engine out’ simulation while taxiing back.  The video below was taken in 2021.