The Bomb has had 3 different power systems; an Enya 19 unbaffled that I wore out, a muffler equiped Enya 19 that I wore out and now a Parkzone F4U outrunner power setup.

Many control systems have flown in the Bomb. First was a galloping ghost homebuilt radio with a Rand LR3, then a Digitrio, then a Man 234, then a Controllaire, a Citizenship, two Krafts, a JR, two Futabas and now a 2.4 Spektrum clone with Dx5.

The Bomb has seen many configuration adjustments.  The first was adding tricycle landing gear in 1966 when the first and only major rebuild of the nose occurred. Also the rudder was enlarged around this time to enable snap rolls. For a time I flew the Bomb with underwing flaps and also fired bottle rockets from the wing. The conversion to electric power happened in 2010 as did the addition of wing tip and tail lights for night flying. We also added a downward pointing light on the strut to help with landing flare; a poor mans radar altimeter.

The Bomb is a veteran of many competitions over the years. I first flew him in pattern when pattern classes were by airplane equipage.  I flew in the Rudder, Elevator and Motor class. I think that was when classes were numbered 1,2 and 3. I also flew the Bomb in Expert class in 1968 after crashing my competition plane, a Lanier Dart. It became the comic relief. The Bomb has won many fun flys including limbos, looping and spot landing events.

When the Bomb and I make visits to clubs that don’t know me (or the Bomb), it is fun convincing the safety inspectors that its safe to fly.  I actually failed once and pulled out a beautiful pattern plane.

Flying the Bomb is like wearing and old set of slippers, warm and familiar. No bad traits.

Here are two photos.  The first is the Champ in 1968 with my Lanier Pursuit that I flew to 3rd in Jr. at the 1969 Nationals. In the background is Ira Spear’s Sr. Falcon powered with a Merco 60 and Orbit radio. The second is the Champ today after a soccer field flying session. 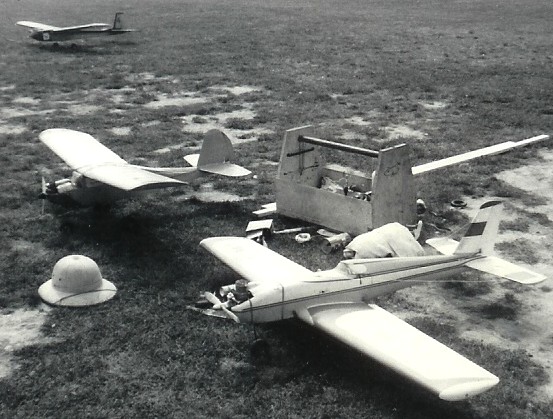 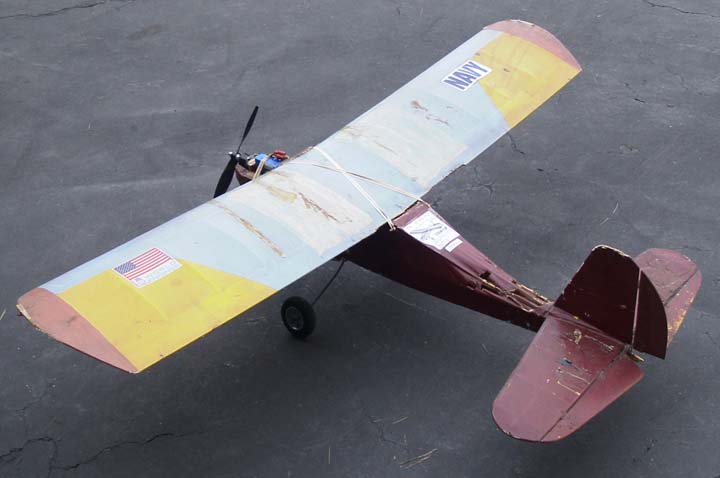