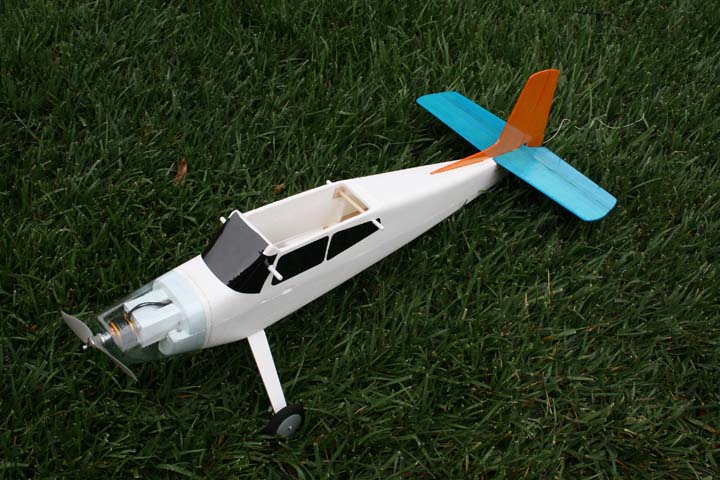 The C-180 build was very easy.  Frank had also supplied a paper pattern for the tail feathers.  Sean decided to make them from 3/32” balsa sheet instead of the suggested 1/8” to keep the required nose weight down.  It turned out to be a good choice.  We then rummaged through my old rolls of covering material and found some rolls of lightweight transparent blue and orange.  He used a couple of the 1/16” laser cut ply control horns I used to include with the kits I made.  Hinging was done with hinge tape.  Control linkage was yellow Sullivan sleeve and .040” music wire.  Servos were whatever we found in our big box of old servos.

He added a tail wheel to make the ground handling easier.  A piece of .040 MW and a bit of fiberglass for reinforcement helps keep it all together. 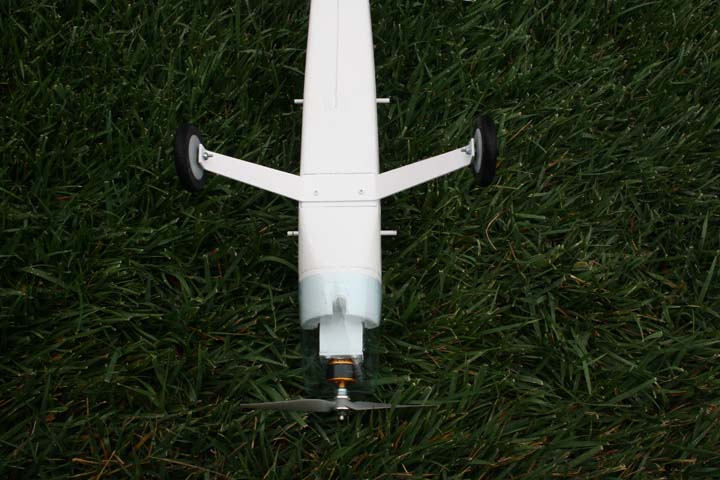 The main gear, and the tail wheel, are from my fifth crashed Mini-Ultrastick pylon racer.  The main gear was shortened by cutting off the lower parts and re-bending and drilling for the axels.  I small piece of 1/8” ply was glued to the lower part of the fuselage so the main gear screws had something to attach to.  Even used the Ultrastick wheels. 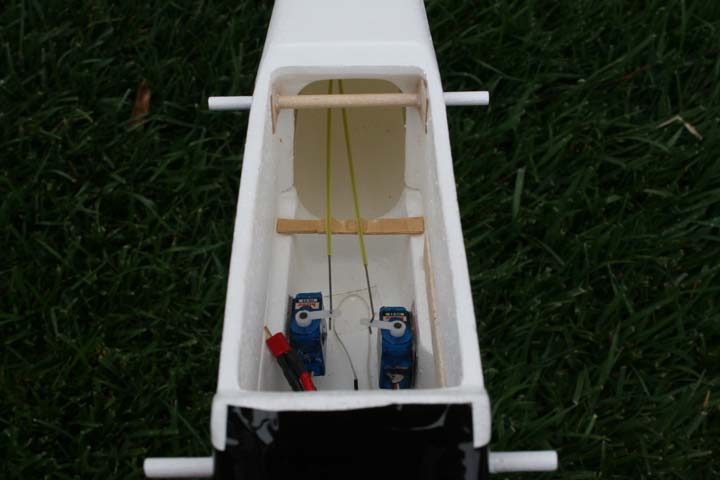 Sean decided he wanted the wing attached with rubber bands.  You can see the 3/16” dowels and backing plates in the pictures.  He just located them in a spot that looked correct. 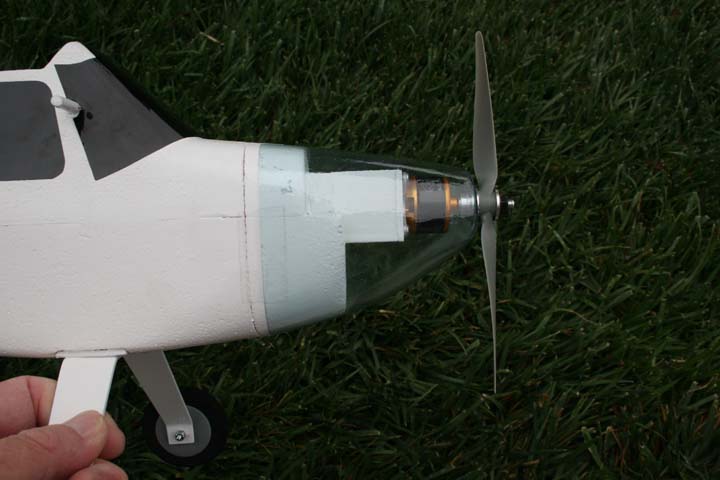 The kit as supplied did not have a cowl.  I thought we could make a quick balsa mold and pull a few cowls on my vac-u-former.  I went straight to the internet and looked at pictures of C-180s for the basic shape.  What I came up with was something a bit longer than what the original kit maker had in mind.  Still, it looks OK to me.  An added bonus is that the cowls have the authentic wood grain look of the full size. . .  Sean put the motor on a block to extend it forward.  He angled it slightly down due to the high wing.  A generous coat of Krylon H2O paint all over the fuse made it look better.  Frank had also supplied the window decals. 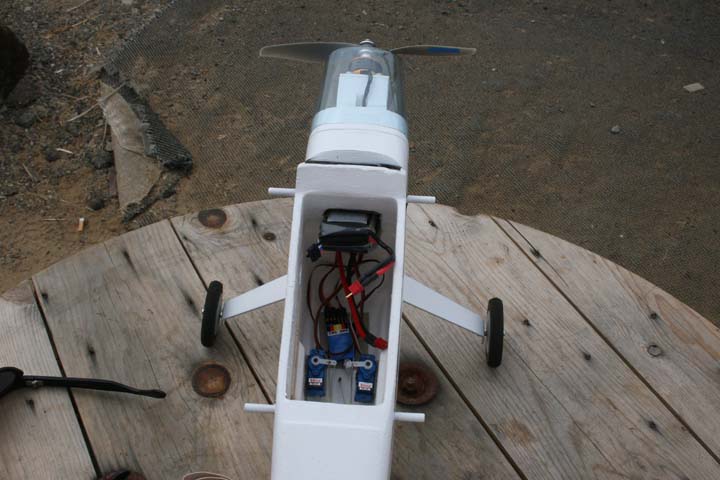 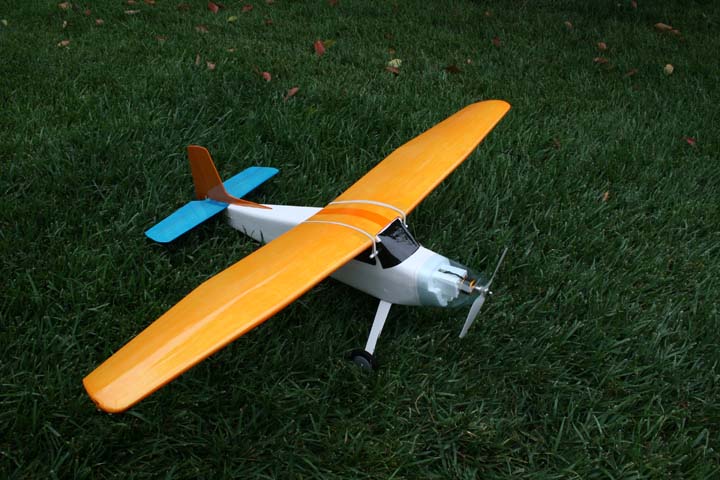 The wing was lightly sanded and covered.  I thought it would be a good idea to add a couple small patched of fiberglass and CA to the LE and TE areas where the rubber bands stretch to keep them from digging into the foam.  Sean did not add ailerons.  It just doesn’t need them.  He did entertain the idea of making it a night flyer but didn’t get the time to add the lights before going back to CO to school.

All up weight is 20 ounces. 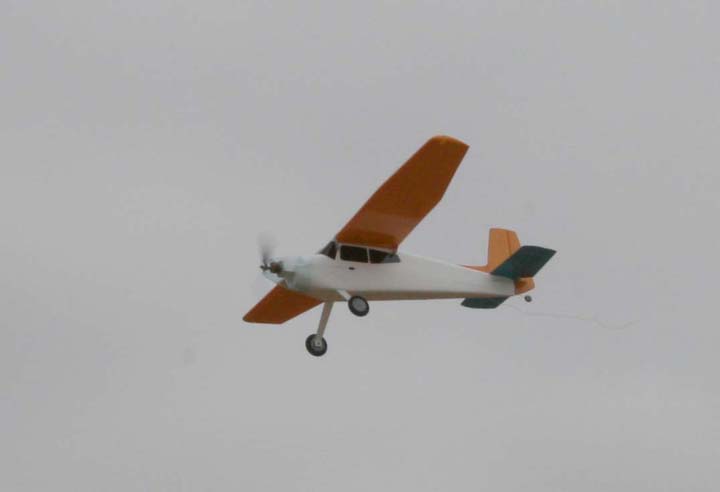 This little gem couldn’t be easier to fly.  It took almost no trim.  On full throttle it climbs like a helium balloon.  It lands with no effort.  For all you who have one from the meeting, put it together!  If you want a cowl, send the editor an email.  I will make one for anyone who is serious about building one.  I may also make a few cowls from a mold of one of the original shorter cowls as well.  It is about 2/3rd the length. 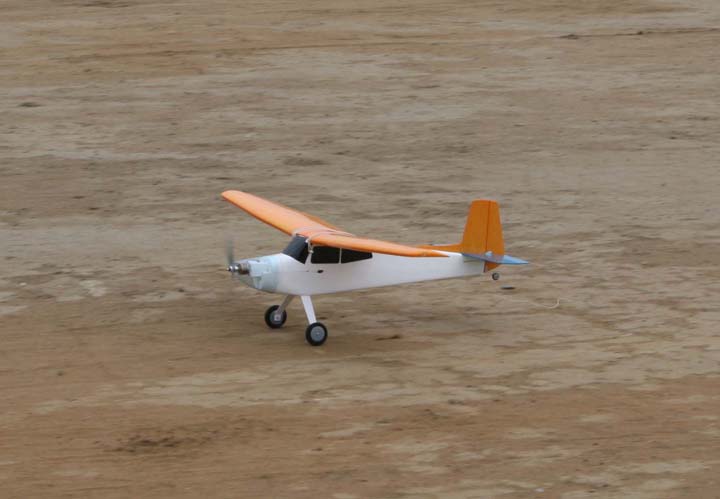 If you make one, send pics to me!  I’ll publish them.