And you thought I was exaggerating.
Well, what can I say is, video testimonial can be a sobering thing. Since then I have broken many props and finally I broke my flight control board mounts so badly that I had to replace them. This time I said “screw it” and did not add the extra vibration isolation grommets, I screwed it on “hard mount” . Well, what do you know?  That extra layer of vibration isolation was what was causing my problems!?  Yes, the flight control board really does not care about vibration. The gyro board does, but it is already mounted on foam tape. As best as I can determine, the extra soft mounting caused an odd vibration input to the already-vibration-mounted gyro board and those gyros just got all confused and, well, tilted.
Wham! Snap roll, right into the ground!
I now have many flights with the hard mounted flight control board ( the big pink thing?) and everything is functioning correctly.
Who’d of thunk?

So now I am just practicing daily on my hovering and will soon transition to forward flight . Some observations are:

1: Cross winds cause translational lift and require the pilot to decrease throttle to maintain altitude.

2: Ground effect is more pronounced than with helicopters and occurs at a higher altitude than a helicopter and requires more throttle sooner.
( ground effect is opposite from fixed wing ! )

3. I really need a low battery alarm as the regular “pulsing-for-low-battery” feature will just cause a multicopter to ” CRASH! Right into the ground”.
( this just requires a couple of resistors and a buzzer as it is already printed on the circuit board. I just have to buy the pieces and do the soldering. )

Here is a picture of the old problem grommets on the pink flight control board: 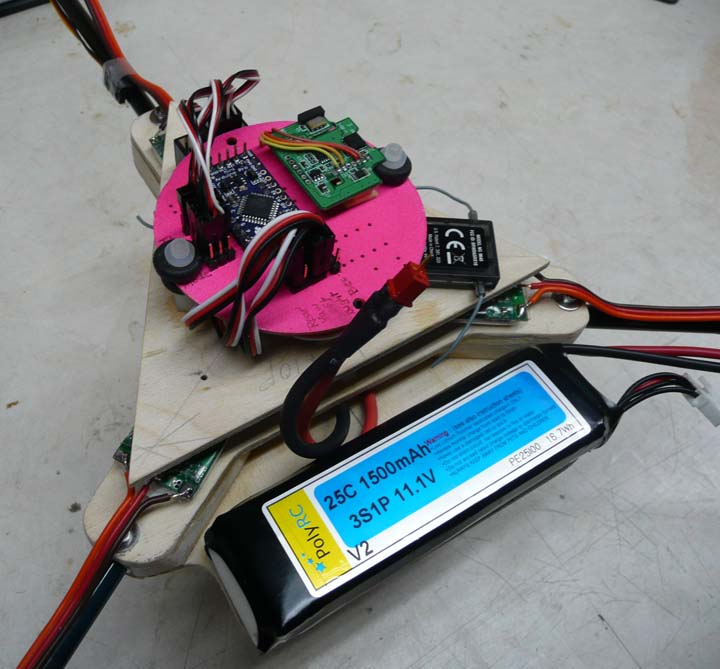 Until the next time on: The Next Big Thing

A swarm of nano quadrotors: