Huh? What are you TALKING about, you say?  Well, I have to admit to being pretty retarded when it comes to computers.  But, where there’s a will, there is a way” as they say, and so I have spent too many hours figuring this thing out because I really want to fly a tricopter.  So for those of us who are computer challenged, this installment might be just the article for you.

So here’s how I see it.  In the tricopter is a little silicon brain (called Arduino) that is the only chance of keeping this thing from snap rolling, into the ground instantly upon rising off of said ground.  The problem is, when you buy it, it’s brain-dead!  I’m not kidding!  On top of that, even when you jolt it to life with electricity the silly thing only understands Italian!  I’m not kidding!  So you have to buy a translator called an FTDI. I guess it’s an acronym, something like; F-or T-translating D-igital I-talian or something like that.  (I don’t know).  It seems that computers like Windows and Macintosh don’t speak digital Italian and need this silicon Rosetta Stone to work it out.  Problem is’ computer are dumb!  I’m not kidding!  If you don’t give them a “cheat sheet” they can’t figure out what to do with their silicon Rosetta Stone.  So you have to get a “driver”.  Now this is a good-news-bad-news sort of thing.  The good news is it’s free.  The bad news is you have to have a cheat sheet to download it.  I’m not kidding!  It was a painful, multistep process that had absolutely no intuitive steps involved.  Now, I can hear the howls and jeers of computer literates everywhere.  I can also hear the sympathetic murmurs from fellow computer illiterates.

OK, so now we have the Rosetta Stone and the computer and the silicon brain ready to talk to each other, but like I said before, it’s brain dead.  It needs a jolt of electricity from some electrodes.  This is called a USB cord.  This is the exciting part, the computer is ON: Check, the Rosetta Stone is plugged into the silicon brain: Check, the USB cord is plugged into the computer and energized: Check, now plug the other end into the tricopter and, and, and???  A couple of lousy little lights blink pathetically.  I’m not kidding! 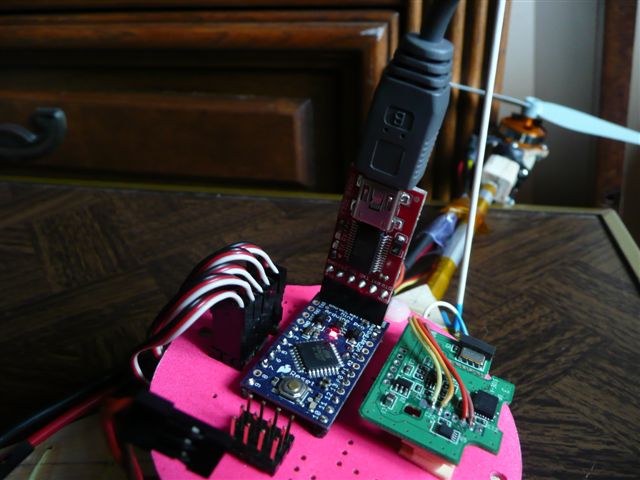 What’s going on here?  Like I said, computers are dumb. The computer has nothing to say to it’s little Italian friend.  And the little Italian friend is just blinking it’s LED lights much like a “deer in the headlights”.  It is no longer brain dead but, as they say, “the lights are on, but no one’s home”.  So we have to give it a mission, a mission to fly a multicopter.  There is a bright young man with the internet name of “Alex in Paris” who has brilliantly written a computer program that fills up the little silicon brain with everything it needs to know to fly a tricopter.  Even more, it will be so smart as to be able to fly a quadrocopter and even a hexacopter!  Who’s the man?  Alex in Paris is the man!  And here’s a link to everything I have learned:
?

So now it’s just a couple of clicks of the mouse and…  Actually it’s a bunch of clicks, and waits, and questions of where to send this information so it does not get lost in the cyberspace of your computer hard drive.  And then you have to Un-Zip the files and put them somewhere else!  I’m not kidding!  But, being the old guy I am, I write all of this stuff down on a sheet a paper because I’m so dumb that I need a “cheat sheet” of my own!  Hey, you do what ya gotta do….

Now, you have to go to the parents of the Arduino and ask them for the proper way to talk to their “baby” (baby my foot, it’s seeming more like a Spawn to me at this point….) This information has the innocuous name of “Down load the Arduino Software”.  You can find it here:

After about a billion more mouse clicks and cheat sheet notes I now have the Arduino program ready to talk to the little silicon brain which is connected to the Rosetta Stone which is connected via the electrode to the computer.  The next step is to send the “mission” to the Arduino software so it can send it to the Rosetta Stone so the little silicon brain knows what to do.  Oh wait, you have to send it to the software and THEN ask it to think about it for a while and decide if it’s appropriate for it little tyke. They call it “compiling” (I’ll tell you what I call it…….)

What’s this? The little tyke does not want to listen?  Oh yeah, the Rosetta Stone (FTDI chip USB converter) can only hear in one ear.  The computer calls it a COM Port and you have to tell the Arduino software which ear to whisper into. (mine was Com Port 3).  So, finally it’s done compiling and now I find out that Arduinos have about a dozen different siblings and you have to pick the right one out before it will go any further.  You DID write down the name didn’t you?  It will be something like: Arduino Pro mini (5V.16MHz) w/ATmega 328.  What?  It didn’t work?  What the..!?

Oh, now you have to ask the software if it’s OK to talk to the little Pro Mini on com port 3. And it compiles one more time.  I’ll be darned if it didn’t work!  Hallelujah! Now press the Upload button and: more blinking lights.  The software says something like: “Done Uploading”.  Believe it or not, this IS success.  I’m not kidding.

Now you launch a GUI!  A GUI?  What in the heck is a GUI?  In this case it is a pretty computer screen with lots of colors and moving things and places to type in numbers and everything!  It’s the other really cool program Alex in Paris wrote and re-wrote and re- wrote a bunch more times until he really got it right.  Way to go Alex!).  Only problem is, it won’t start!  After wading through almost 1000 pages on R/C Groups I find out I need something called JAVA on my computer to make the GUI go good.  Here’s the R/C Groups link:

I am getting good at this downloading thing now and the Java installation goes without too much pain.  So I launch the GUI and now it works like a charm!  Now what?  That my friends, is a story for the next installment of: The Next Big Thing.

Check out this video of a similar aircraft: