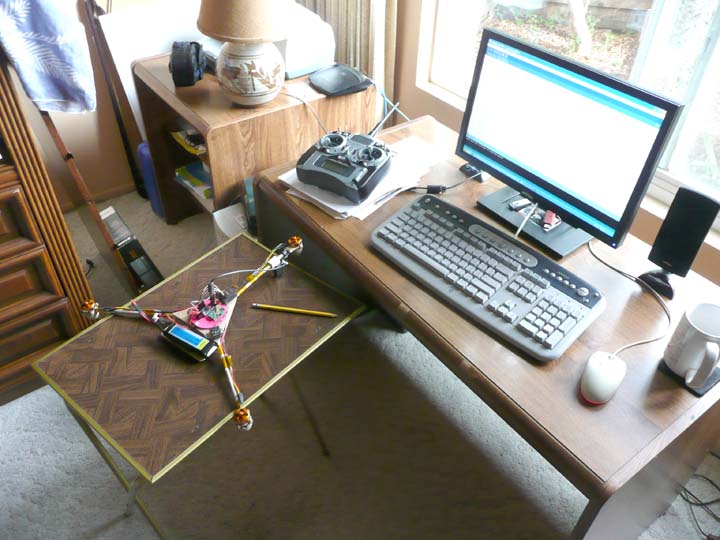 As you can see, I have a computer hooked up to my flying machine via a USB cable. This is both a good thing and a bad  thing.  It’s a good thing because I can (so I’m told) talk to my little Itialian friend with a universal translator called a GUI. It’s a bad thing because, just because I can pronounce GUI doesn’t mean I know how to do anything with it!

I use the GUI and find that all is well with my little Italian friend, whom I now call Mario. Yes, I have now anthropomorphized my inanimate tricopter and given it a name and a personna. The depths of my journey into tricopter nirvana seem to be a bottomless chasim… But Mario tells me that he has not received instructions on how to fly his new body.(?)  I now have an epipheny. When I want to fly “my” tricopter, I will wiggle the transmitter sticks and the radio receiver will tell Mario what I want and Mario will fly the tricopter, not me! Yes , this is beyond “fly-by-wire” folks. This is fly-by-computer transmitter-to-X giga hertz radio link-to-computer receiver-to-Mario-to tricopter.

With my new found vision I am determined to give Mario all the wisdom needed to be a multicopter pilot. This requires me to get the
information from here:

And teach it to Mario with an Arduino sketch program/application from here:

Are you confused?
I’m so confused.
But, I want to fly a tricopter and so I carry on.

It’s not so bad. Actually it’s kind of rewarding. Mario now has everything he needs to fly “his” tricopter. He is so-o-o happy that he blinks his lights at me in a kind of electronic kumbaiya!  ( it’s ok, I’ll be alright, really…) 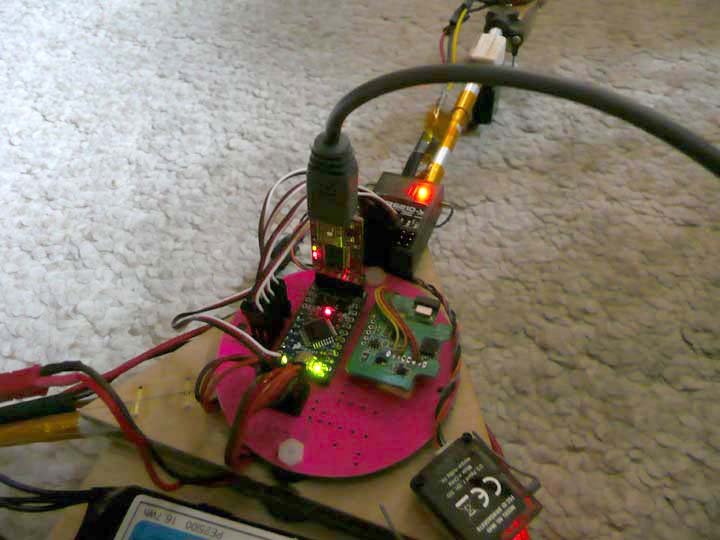 So now it’s the big moment. Mario knows what to do. I know what to do. What I must do is to plug in the battery pack. Sounds simple huh?  Well, not really because if you have followed this whole saga, you know that if even ONE little thing is not correct, well, ZZITT! Something is going to burn up. I know this too. And with great trepidation and triple checking every connection, I do it. I plug in the battery. ( have you ever had so much drama plugging in a battery pack?)

OH, LORD ALMIGHTY ! The ESC’s start blinking and beeping, Mario just blinks ( but, he’s the strong silent type) NOTHING starts smoking!  YES-S-S! I move the stick to arm the motors and the Green LED confirms arming and ..and.. and..?

And nothing! Just the cacophony of 3 ESC’s saying that they hear nothing,know nothing, and will do nothing but blink and beep.  Now this is a bit unnerving with three ESC’s blareing away and me being, well, so confused.

But, I want to fly a tricopter and so I carry on.

So I try to wiggle the rudder stick and see if the tail servo works. Yes, for one brief instance and then it’s dead. chit I forgot I am using an old computer controlled solid state programmable multivariable everything-mixable-do-everything Airtronics NEGATIVE shift radio. Yeah, it fried the beautiful positive-shift metal geared Hitech 85mg servo in a 1/2 heartbeat. chit

I will not be denied! I will throw money at this project! I will buy a new radio and servo. ( I’ll save you Mario! ) So I buy a DX6i and a Hitech 65HB and install them. ( how anticlimatic is that?)  But the exciting part is :

I plug in the battery pack once again!  Oh Yeah! Blinking lights and treble tone beeps and no smoke.  The high anxiety move: wiggle the rudder stick. YES! it works! It works! Oh the sweet smell of sucess! When I move the tricopter around the yaw axis , Mario moves the servo in the opposite direction . OK. thats sucess, kind of like a blinking light. It means the gyros are working and the CPU is working and the reciever is working and , and, and. chit. the ESC’s are still blinking and beeping their treble tone of a cacophony of failure.

I’m so confused.
Do I really want to fly a tricopter?

Folks, I tried everything, really. Nothing worked. Finally I called Lucien at innov8tive designs and asked him about these Scorpion Commander ESC’s. Let me tell you, Lucien’s great. He is the gold standard of techinal support.  I did not like what he told me, but….  The bottom line is: Scorpion ESC’s will “time out” in 3 -5 seconds upon plugging in to the battery pack and go into fail-safe mode if there is no control signal. It is a nice safety feature.  BUT, Mario needs 6-8 seconds to “wake up” upon plugging in the battery pack before hes sends a signal.  Do the math.

I’m not confused.
I have to buy 3 new ESC’s that do not have fail safe programming.
Because I still want to fly a tricopter , I will carry on…

Until next month, stay tuned for :

The Next Big Thing