It was a fun Electroglide this month. We had nine pilots competing under blue skies with light 6 -7 mph breeze out of the Northwest. The gliders flown comprised of seven Radians and two Conscendos.

There was a brief ceremony to award the club’s new competition medals to last month’s winners.

A special thanks to club president Steve Manganelli, club members Frank Sutton and Larry Kosta for creating these cool medals for the Electroglide competition. 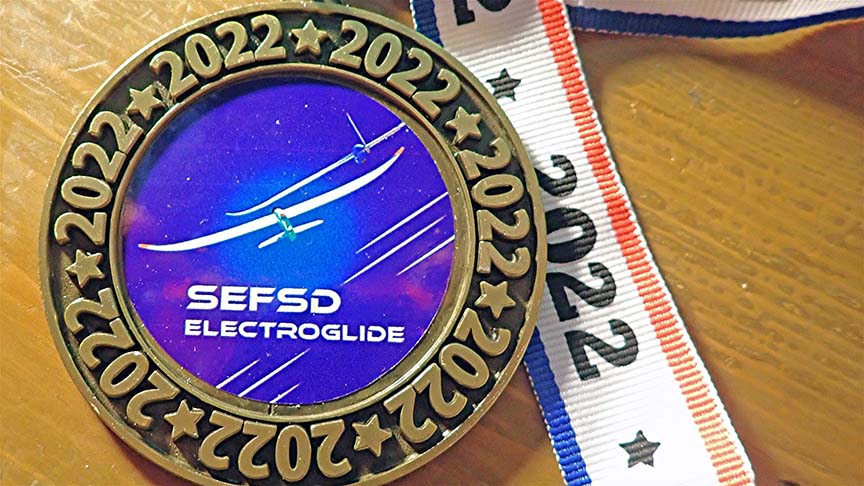 So, first launch went smoothly with all nine aircraft taking to the sky. However the lift was not to be found. Jon Graber had the long flight, piloting a Radian for 3:20 minutes and hitting a 20-point bonus landing. Scott Vance, also flying a Radian, was second with a flight time of 3:11 minutes and a 10-point landing. I came in third at 2:50 minutes, also with a Radian.

I would like to point out that the target circles were filled with aircraft. Aside from the above mentioned spot landings, Dennis LaBerge had a 30-point landing. Fritz Logan and Alex Sutton both had 20-point landings and Scott Vance had a 10-point landing.

Second launch had eight aircraft climbing out with a few of us finding some lift directly north of our field. In The Radian Class, the long flight was had by me at 7:13 with a 20-point landing. Alex Sutton came in second at 6:58 and Fritz Logan was third at 6:20 with a 10-point landing.

In the open Class, both Neil Zhu and Bob Stinson came back at 1:45, in the 10-point landing circle! We don’t often see that.

For the third launch, the lift that was there disappeared.

In the Open Class, Bob Stinson had the long flight at 2:20 with a 20-point landing and Neil Zhu was second with a 1:42 flight and a 30-point landing.

In the Open Class, Bob Stinson had the longest flight of all of us with a time aloft of 6:56 and a 10-point landing, (Yes, this was with a Conscendo). Neil Zhu had a flight of 3:20 with a 20-point landing.

I would like to congratulate all the Electroglide pilots for scoring so many extra points with their spot landings; that takes skill.

A thank you goes out to Frank Sutton for providing all the event pictures.