Dang! This was brutal, and as one pilot remarked, eleven went out and six returned. I know this sounds like a comment from a war movie, yet the Electroglide contest was a battle. A battle against the elements.

Flying conditions started out as a foggy overcast morning, with the sky starting to clear at 9:30 a.m. A little before 10:00, Scott Vance got his glider up which has a reporting altimeter. He reported that the cloud cover began at 500 feet. So, the first launch proceeded at 10:00 a.m. with eleven gliders going up.

In the short time between the end of the first round and the second launch, the weather turned against us. The wind changed from a 5 mph South West to a North West 8 mph breeze. Perhaps, this is what caused the cloud cover to drop to around 200 ft. Within 10 seconds of our allowed motor run, our aircraft were disappearing into the cloud cover.

We have all been there, when we were learning how to fly; a momentary loss of sighting of our airplane. We usually recovered sighting after a few seconds and the lesson was learned. Now imagine almost all the aircraft in that second launch disappearing into the clouds. It was like a collective gasp going through us.

My Radian was lost from sight. I cut power and pushed a little down elevator, still no sighting. I released the elevator and added a light left rudder and waited; still no sighting. I released rudder and added down elevator again, still no airplane. This is getting scary! I quit looking where I thought the aircraft should be and scanned a wider area and there it was, heading straight down just above the palm trees along the walking path. I barely recovered before it became a lawn dart. (Have a look at the attached picture called Jeff’s Dart.)

For those pilots who kept clear of the cloud cover or successfully got out of it, the flight times were great. The longest was Fred Daugherty at 9:07minutes. Second was Bob Stinson at 9:00, then Dennis LaBerge at 8:30 with a 20-point landing. The next flight time after Dennis was Stephen Treger at 2:40. His son had a flight time of 38 seconds but picked up the only other bonus landing of 10-points plus the Lucky Dog award.   My low altitude recovery gave me a flight time of 49 seconds. Going over the collected score sheets, it looks like we lost four aircraft on that second launch. Brutal!

The winner for the day was Bob Stinson with a total point score of 204. Second place went to Dennis LaBerge at 202 and third place was Fred Daugherty at 115 points.

There was some good flying on the third and fourth rounds. Even with the wind, low cloud cover, and short flight times, many pilots were able to gain extra points with the landing bonus credits.

It’s a shame four aircraft crashed during the contest, but the remaining pilots adapted to the weather conditions and flew quite well.

Enjoy these pictures courtesy of Frank Sutton, thanks Frank.

Next Electroglide is scheduled for April 21st. First launch is at 10:00 a.m. 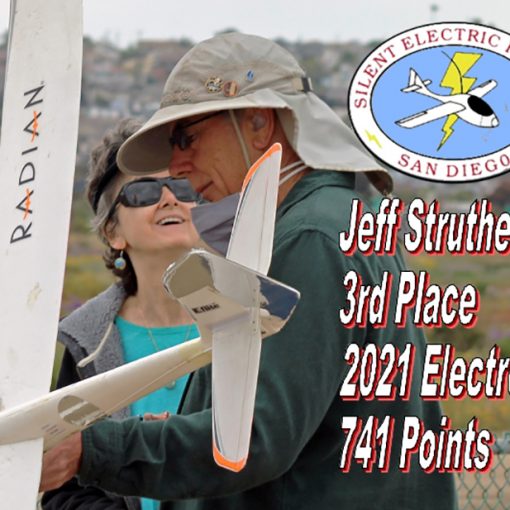