Less people mean’t more flying! We got in 2 rounds each of B and J on each of the 3 days. Nary a drop of rain impeded our fun! Day one, the get- organized day took us until nearly 4 P.M., the last day we got it done by 1:45 as we had a motive : a fabulous poolside barbeque served up at the Hawaiian residence of Ken Ueyama : Thanks Ken! 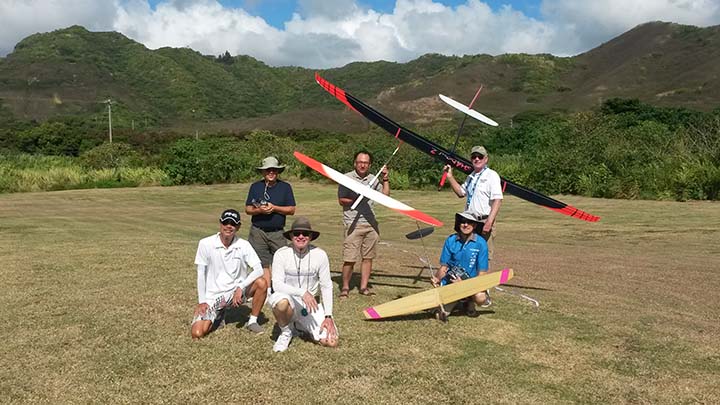 The Kawainui Airfield could be considered a bit “tight” for F-5B. The 150 Meter course drew a diagonal line through the entire site which was surrounded by plane eating jungle! There was not a lot of room for Base A climb outs from a low starting altitude even though we were standing right next to the jungle. Base B turns were against a hardscape back drop : can you say depth perception? Again, because of the size of the field, we had to place the landing circles on the course thus flew consecutive groups of (2) waiting for both to land before the next group. The starting order was arranged so pilots could help each other in their native languages. Most of the B folks suitably respected the jungle resulting in conservative lap counts. A couple of 47s were the high envelope, most folks happy enough with 44s. The lift was well suited to the L/D of the F-5B models, with very few excursions above 1750 Watt-Minutes (W-M). One notable exception was Jeff Keesaman whom watched his standout 48 leg distance performance end at a porky 1760 WM and went downhill from there finishing duration north of 2000 W-M, oh well, at least the Jungle didn’t eat it! At the end, Steve Neu won (3) normalized rounds and prevailed, Lenny Keer won (2) normalized rounds and took 2nd and Ken Ueyama took (1) round and third place preventing all the tiki-trophies going to us Americans.

The Japanese however, preferred to tempt fate with the jungle. Ken demonstrated the mid-air wing detachment trick and both pieces disappeared into the canopy. Urban retrieved the wing while Fumi climbed a tree to retrieve the fuselage; that plane was done. Prior to that, Fumi learned about high speed stalls and excessive elevator the hard way augering into the deep wet stuff. The wing was destroyed but everything else remained intact. Not a problem, Ken and Fumi had the same design model and after a little programming were able to share the remaining wing between them. On a further flight with 1760 W-M already on the tally, Ken Ueyama decided that he didn’t need anymore motor run to stay within the field boundaries. He was wrong, the jungle was had it’s due again and the last wing between them was in the swamp! Undaunted, Ken blipped the motor to locate it by sound, sacrificing the propeller and Fumi made the heroic, soaking wet rescue : go Fumi! 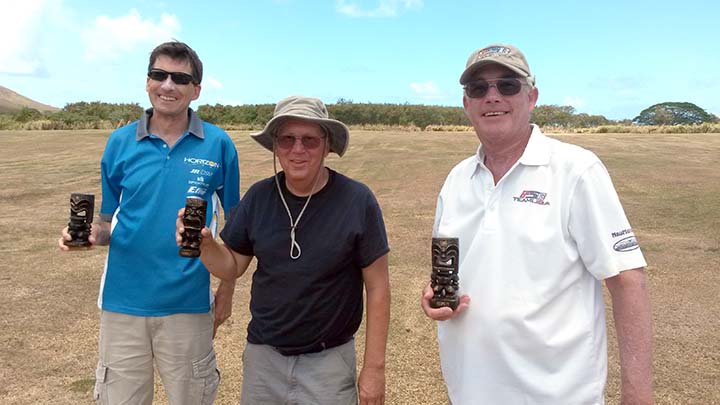 In F-5J things were a bit calmer. Lenny with the superior airplane and thermal hunting skills prevailed and Joe Nave using local thermal knowledge but an inferior airplane took 2nd. Steve Neu was the highest of the B-J converts and took third.

As you may have guessed, we bent a few rules and did everything we could to help each other keep flying; pretty much what you want to do for a fun contest that’s a long way from home and any hobby Shop. Steve Neu had to lend Ken a motor just so he and Fumi would both have a viable B Model. I want to close by thanking my dear wife Michelle for unflappable base judging, Barbara Keer for scoring both F-5B and J and Wayne Walker for assembling equipment and coming to Hawaii to hang with us.