Enjoy a little blast from the past.  This article first appeared in the June 2008 issue of Peak Charge. 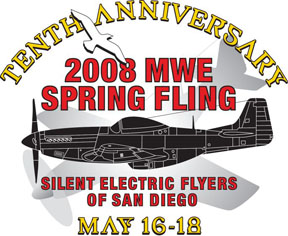 Next in line for the most selfless include Night Watchmen Lou Rosse and John Hainlen, Impound Coordinator Frank Gagliardi and the ever cheerful raffle and merchandise sales team of Don and Donelle Griffin, this year assisted by Michelle Baker deemed an enthusiastic addition to the team. Wayne Walker was the master of the parking delimiters, parking enforcement and provider of the flag used for the daily flag raising, and Tim Attaway, the transporter of the Club Trailer from which the PA system, signs, tents and other SEFSD owned equipment magically jumped into their positions on the field…NOT! The blistered hands, filthy clothes setup crew included Tim, Tom Brown, Zeke Mazur, Bob Anson, Lou, Stelio and several others, the teardown crew included myself, Michelle, Stelio, Lou, Wayne and Tim. Sam Wright handled the announcing chores like the pro he is on Saturday and he was also responsible for the Kyosho donations. Sunday, I advised hydration, raffle ticket/memorabilia sales and merchandise purchase from our vendors. The 10th Anniversary Logo was designed by graphics professional, Jack Hix and the announcer of the lucky raffle winners both days was Mr. Mark Wood. Ray Fulks got our Government permit from the City Parks folks, Chuck Grim coordinated the sanitation equipment, Frank Smith did an outstanding job with trash management, and Doug Rubin coordinated the caterer serving us the tasty chow. Special thanks to Boy Scout Troop 24 for gate/crowd control both Saturday and Sunday. Scout leaders included Dick Thorn, Jennifer Calvert, Shawn Shepard, Joe Strickland, Abby Voigt, Dan Machado and Nick Amicone. Scouts doing the heavy lifting included Pavel Thorn, Michael Orona, Conner Shepard, Jack Bowman, Steven Strickland, Micah Schatz, Cody Machado and Nick Amicone. Thanks folks!

MWE wouldn’t be what it is without vendors and sponsors. I’d like to mention Hitec/Multiplex, NeuMotors, ThunderPower RC, Aeromodel/Hacker, and Castle Creations as key sponsors contributing not only merchandise for the fabulous raffle but cash $ to pay for the equipment rentals, thanks gents, we couldn’t have done it without you. Thanks also goes to RC Sport Flyer Magazine for their donation. The rule for vendors requires a minimum donation of merchandise of $150 retail value. If you saw the prize haul for the raffle and counted the vendors you’d realize it didn’t add up : our vendors were very, very generous! Besides the sponsors and vendors we also had contributions from Great Planes, Horizon Hobby, E-Flite, Medusa Research, Kyosho, LipoSack, Tower Hobbies, RC-TEK, and Zurich Sunglasses. The vendors present at the event included NeuMotors, Aero-Model/Hacker, DW Foamies, Extreme RC Products, Innov8tive Designs, Discount Hobby Warehouse, Hobby Town San Marcos, E-Power RC, Center Stick, Electronic Model Systems, Cermark, Fun RC Hobby, MikroDesigns and last but not least the AMA booth manned by Dist X AVP Tim Attaway and his capable crew of AMA volunteers.

Part of the package for being a sponsor and vendor is allotted time for the Noon-time demos. Steve Neu and Pedro Brantuas showed off respectively F-5B (Multitask) and F5 (Pylon) models equipped with judicious amounts of NeuEnergy Cells and NeuMotors. Pedro followed up with a precision aerobatics demonstration with his 35% size YAK-54 flying on a NeuMotor 2215 and 14S 4900. Hitec/Multiplex used their slots to show us a couple of new aerobatic models and a substitute for a “typical .40 glow size trainer”, but purpose built for electric. These new models are made from a new foam called “Elapor” which is both resilient and serviceable. Hitec also brought out a couple of their very popular Twister EDF jets which flew very well in out of the box form and even better with Neu-excess power. Formation flight with a couple of these was memorable. Mike Morgan and his DW-Foamies had a virtual “airforce of foam” in the air during his demo time. Fourteen year old Ryan Archer from Scottsdale AZ and our own Pedro probably shared the prize for most prolific demo pilots each flying for at least (3) different outfits. To be in such demand at a young age is a tribute to young Mr. Archers’ skills! Speaking of young, Mr. Kyle Dahl of Delano, CA was our lone and very competent Helicopter demo pilot. Expert aerobatic pilot Mr. Steve Nelson treated us to an Unlimited Class Aerobatic Demonstration with Ray Fulks’ “Miss Ellie”.

What would an MWE be without famous demo pilots? Sean Plummer of Aeromodel/Hacker brought the goods! Jeff Szueber Jr. and Matt Szueber both expert caliber precision aerobatic pilots wowed us with their 3D flying or large aerobatic models set to music. Their takeoffs followed immediately by a wingspan height rolling circle set the stage for harriers, hovering, tail touches and other crowd pleasing maneuvers. The final demo of Saturday’s fest was super-expert Mark Leseberg flying a large (like 40% size) biplane. Mark’s fabulous combination of both precision and 3D aerobatics set to music was a fitting cap to the Saturday demonstrations.

MWE is not really a contest but a funfly. Nonetheless, we gathered all the Electroglide enthusiasts together Saturday A.M for three tosses for plaques created by Stelio. Bob Anson was declared the top Electroglider followed by Stelio and Dick Prentice. Before noon on Saturday, we also gathered all the scale models and handed out plaques for both “large” and “small size” categories. Each pilot had the run of the field to operate his model in a scale like manner, including a crash that the judges deemed scale and earned the pilot a respectable second place. Large scale was captured by “Eindecker” which I’m sure was the aircraft not the pilot whose name escaped our records, followed by Ray Fulks with his Extra 300 and Brad Bender with his J-3 Cub. Smaller scale was taken by Steve Neu with his F7F Tigercat, then Wayne Walker’s Yak-54, 2nd and Mark Ferreria’s HondaJet in 3rd. Of course, what would an MWE be without the Evil Dr. Jet’s limbo combat? The Limbo Combat was the last official event of the MWE before the final Sunday raffle. I think Mr. Mike Morgan of DW-Foamies actually outdid the evil Dr. Jet (aka Bill Knoll) in the planning of this very twisted task. Mr. Morgan designed and built a drill powered “rotisserie” approximately 10 ft wide and 4′ off the ground. The rotisserie was liberally embedded with 12″ long spinning carbon spikes waiting to fillet any unsuspecting foamy flying too close to the bar! Part of the fun of Limbo combat is that any points accrued by a competitor you take out, go to you! The other fun part is the mystery of the configuration, known only to Mr. Morgan until actually set up : no practicing!  After the foam chips cleared in round one, only Mr. Richard Carlton had a semblance of a lap completed. Dr. J, then simplified the task to just getting under the limbo for Round 2. Again Mr. Carlton proved victorious and claimed the plaque and bragging rights to Limbo combat champion for MWE 2008. Second and third place? There’s no second or third place in Limbo Combat!

What else? The weather cooperated perfectly all 3 days, maybe it was a little too hot, record setting hot in the East County making Mission Bay the place to be. The 72 registered pilots came from not too far and not too wide probably due to high gas prices. Richard Carlton and son Alex came down from the Sacramento area, Chris Stephenson from Las Vegas, Charles Steed from Wyoming and Roy Hooker from Peoria AZ; most the rest from the greater Southern CA area. Thanks for coming all; we’ll see you next year!

Steve Manganelli, SEFSD Chairman of the Board, Contest Director