Each year the rules are released sometime in mid-august (the rules can be read here), it is at this time that senior team members usually gather together and start assigning team leads, each team lead will be responsible for one specific aspect of the plane. It is at this time that we also start analyzing the competition scoring in order to determine what type of airplane will allow us to achieve the maximum score possible.

This year we decided to go with a flying wing as it can be seen from some preliminary CAD models seen below.

Since the fall semester has already started at this time, it is not unusual to combine DBF with other school project in order to gather extra data about the airplane’s performance so that it can later be included in the report. After a few more design changes, we finally arrive at a prototype-ready model. It is at this time that we start building said prototype.

Building the prototype usually starts early December and continues throughout winter break. This year due to the simplicity of our design it was decided that instead of building the airplane from scratch, it would be easier to modify an existing flying wing. The wing cores are made of extended polypropylene (EPP), this would make the wing resistant to all the crashes that it would later experience when learning how to launch a flying wing.

Once we assembled the wing cores the payload space was dremeled out. 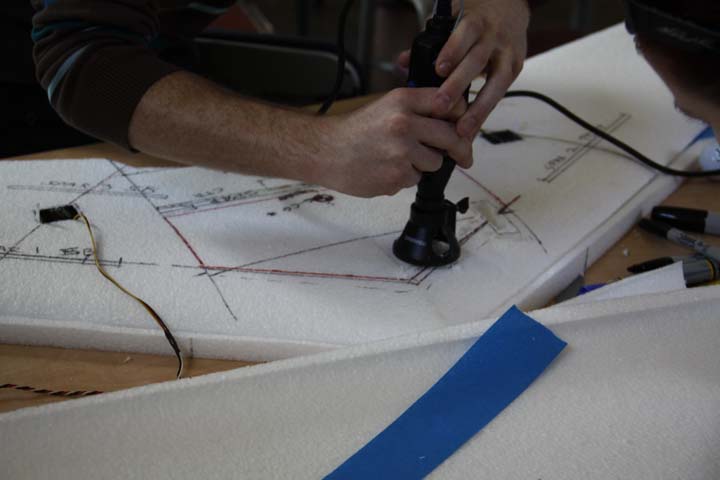 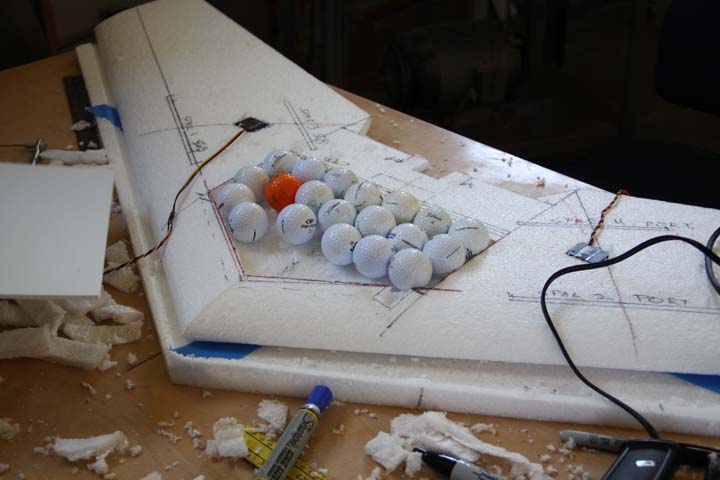 To prevent damage during crashes and to add some extra support, the plane was covered in a laminating film. 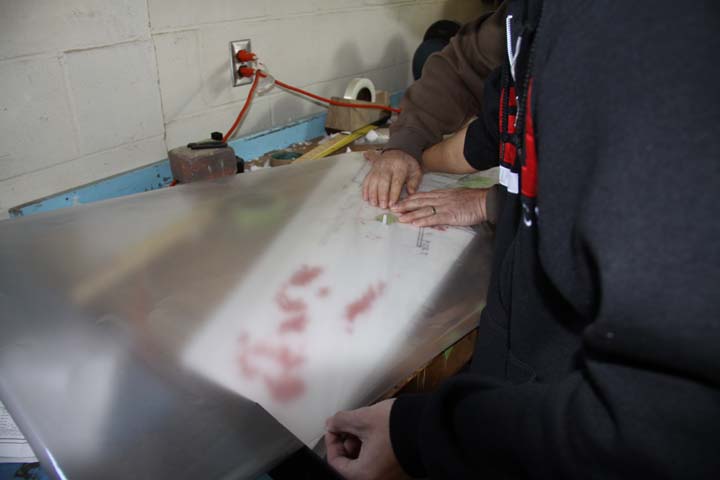 Since this was only a prototype, not a lot of care was placed on the details so we ended up using a piece of coroplast as a lid.

Flight testing started sometime mid-January. The first couple of flights were troublesome because none of us had any experience with hand-launched planes. After a couple weeks of practice, however, we were able to perfect our throwing method. 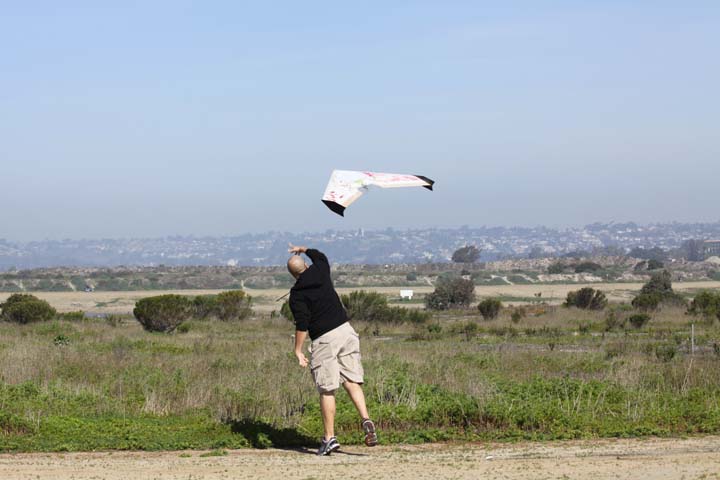 It took us a few weeks of test flying to gather all relevant data including flight performance with both payloads, as well as the empty flight.

With this data, coupled with advise given to us by our pilot as well as other advisors we decided to implement small changes, mainly in the area of structure.

After the flight testing phase was over, we spent the remaining time redesigning, building, and flight testing a new competition-ready airplane. Some of the changes that the new plane implemented were:

The final configuration was the following: 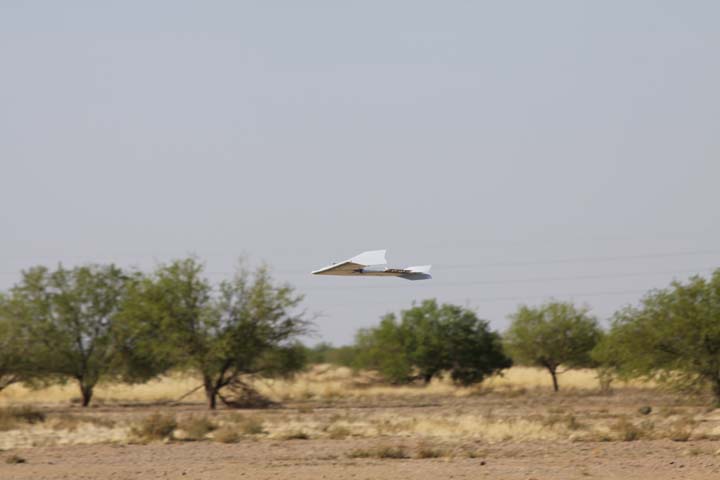 Since we did not have the appropriate propeller we ended up using a propeller that was 1″ bigger, this in turn caused us to draw more current than the one allowed by the 20 Amp fuse thereby blowing the fuse and cutting off all power to our motor. The video of the second mission attempt is here.

For the second attempt at mission 2 we were able to modify a bigger propeller into the correct size, but the propeller was not attached correctly so the propeller flew off as soon as the throttle was increased.

On our last attempt at mission 2 we tried to get everything perfect, however, it seems that Murphy kept following us around, one of the bolts that held a wing attached to the center section was not fully tightened. The launch was perfect, however, on the downwind leg we started to get some flutter from the loose wing, this cause the other wing to become loose and ended up bringing the plane down. The crash might not have been spectacular, but the plane hit the ground with enough force to break apart a battery cell and leave a burn mark on the fiberglass hatch. The video for that flight is here. 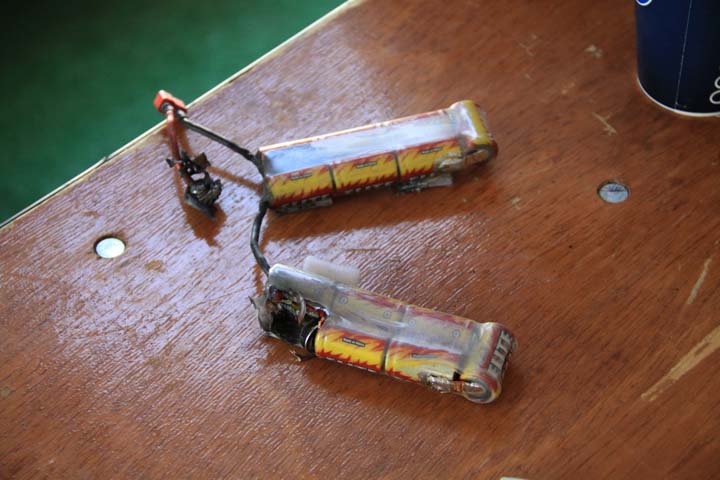 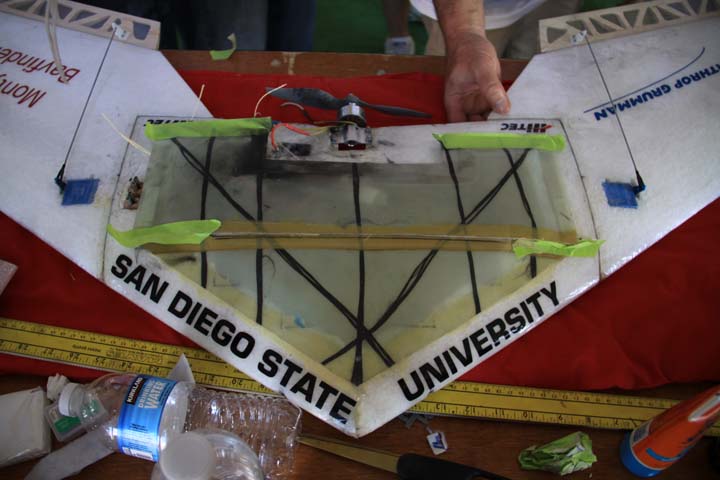 We were only allowed 4 flight attempts to complete all 3 missions and we ended up using 3 of those on mission 2 (one for mission 1), so this meant that the competition was over for us.

In the end we ended up having to settle for 43rd place (results can be found here).

More competition pictures can be found in the following links: