I admit it, I am a numbers guy. I gravitate to crunching numbers. I have spreadsheets for my home energy and water use, I designed and built my home solar panel array, at work I used to calculate power budgets for underwater vehicles, etc., etc. Not bragging, just how I am. And it goes equally well for this hobby of model aviation. There are plenty of opportunities for crunching numbers in modeling!

So, when I saw the item in the recent club newsletter “Scaling and Comparing Performances of Aircraft Models (2D/3D Wing Loading) by Andrej Marinsek, I was eager to read it. I’ve been using 3D wing loading in my modeling for many years, and I was very interested in seeing what the author had to say. Unfortunately, my enthusiasm for this useful tool was not reflected in his article.

I don’t know Mr. Marinsek at all, never heard of him to tell the truth. I suppose he is a nice enough guy (he is an aero modeler after all). I could nitpick his article but suffice it to say I don’t agree with his conclusions. Fact is, he doesn’t have a positive thing to say about 3D wing loading, and I just can’t let that go without a response.

The great usefulness of 3D wing loading (3DWL) is it provides a performance number that is size invariant; like 2DWL, it gives an idea of the stall speed and turning radius but is the same no matter the size (scale) of the airplane. For example, I have an FMS Piper PA-18 Super Cub model (1.7 m). It has a 3DWL of 2.9 oz./ft³; the full-scale Super Cub has 3DWLs from 2.3 oz./ft³ (empty) to 5.0 oz./ft³ (gross). Mine is in the range—it tells you something, specifically that the model is going to fly “like” the full scale. My little 1.1 m T-28 Trojan has a 3DWL of 5.2 oz./ft³; it is smaller and lighter than the Super Cub, yet has a higher 3DWL, and that is noticeable in how it flies.

The form of 3DWL I use is what Marinsek calls Eq. 10 (k=1/b x m/S); or what Larry Renger in another article calls Eq. 4 (weight = k x wing area x wingspan or m=k x S x b). Same thing. The units I prefer are the ounces and feet as used above, but any weight and length units a modeler finds convenient will do (and it is weight we measure, not mass, besides which at the earth’s surface and at typical model density, there isn’t a dime’s worth of difference).

The elegance of this particular form, as opposed to the K = m/√S³ form, is its mathematical agreement with another excellent article, “Understanding Scale Speed” by the great Bob Boucher (pronounced booshay). This article is well worth a read. It thoroughly discusses the different numerical aspects of scaling full-size aircraft down to models—including the proper scaling of time! His Rule 2 states “the wing loading of a model built to scale weight will be reduced from that of the real airplane by the ratio of the scale factor.” When a 3DWL value is calculated, part of the scale factor is included (the denominator). When that value is multiplied by a model wingspan, that introduces the numerator, completing the scale factor and voila, you have the 2DWL. Multiply that result by the model’s wing area and you have the model weight. Very neat. The other form is just not as intuitive or handy—how often do you raise a number to the 2/3 power? It is equivalent to my preferred form IF the wing is assumed to be square, i.e., with an aspect ratio of 1 (span = square root of area). It loses the scaling ability. I just don’t see any advantage to it.

The reader who gets to the end of Marinsek’s article is presented with a number of 3DWL limitations (without having enumerated its strengths). Well, yes, sailplanes won’t compare well with warbirds, nor jets with trainers etc. And certainly, there are numerous other factors involved in airplane performance. It is not some “universal field theory” of aero modeling! It is ideal for scaling a specific subject. It is instructive for comparing similar types of models. It’s a useful tool—use it thoughtfully; your mileage may vary; as always, there’s no substitute for understanding! 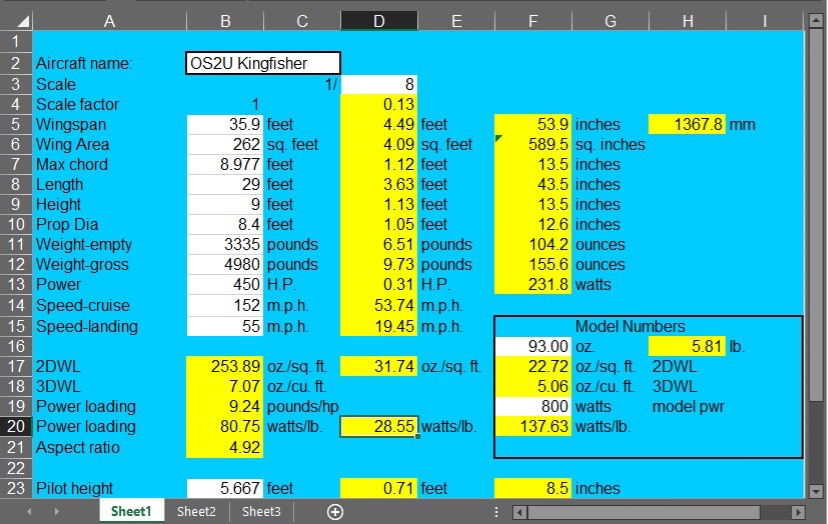