The Phantom was a commercial breakthrough, and increasingly capable generations have followed, as well as many imitators. Islamic State militants started using drones to film suicide attacks for recruitment videos in 2014 and soon moved to battlefield reconnaissance. A drone video of a Syrian military base was followed by suicide bombings at the base’s weak points. Islamic State drones guide armored truck bombs to their targets; in Mosul they locate targets and help adjust the aim of mortar fire.

In early 2016, fixed-wing Islamic State drones conducted kamikaze-style attacks in Iraq and Syria. These were superseded by quadcopters dropping grenades, which have become increasingly common. The quadcopters are difficult to shoot down with small arms.

Iraqi journalist Nabard Hussein reported 10 quadcopter grenade attacks in one hour in Mosul. In early February, the Iraqi military told the Associated Press they had suffered three dead and “dozens” injured from drone attacks; the number killed has risen in the intervening weeks. Kurdish fighters have also been targeted, as have civilians, with nine killed in one incident in Baghdad. The tempo has increased; the Islamic State (ISIS) group boasted of drone attacks in eight locations in one day in February. 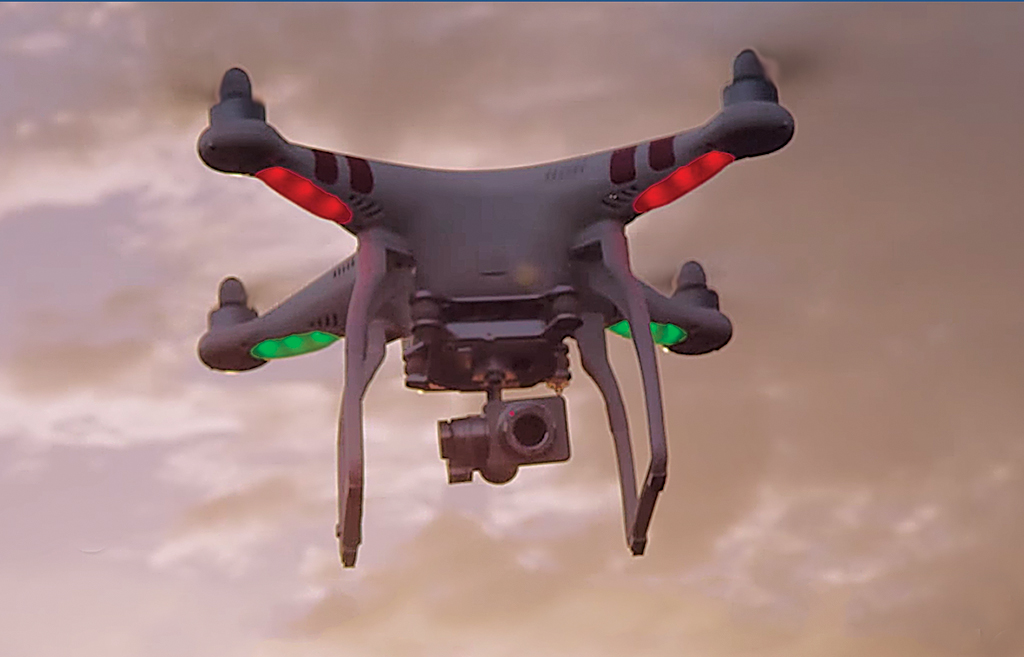 Islamic State militants have turned to the use of consumer drones such as DJI’s Phantom. Credit: DJI

ISIS documents reveal a coordinated drone effort rather than local initiatives. The most common munition is a 40-mm grenade warhead in a finned aerodynamic body, produced in large numbers. The grenade’s usual arming mechanism has been replaced by a ring that is automatically pulled out as the munition is released. The half-pound high-explosive dual-purpose warhead has a lethal radius of 5 m (16 ft.) and can penetrate 50-mm of steel plate.

ISIS videos show the munitions striking with considerable accuracy, scoring direct hits on vehicles or landing in the middle of groups of people. While these instances are cherry-picked, and misses are not shown, they give an idea of the accuracy that can be achieved by a hovering platform at low altitude. The addition of targeting software may increase this accuracy in the future.

ISIS has also developed fixed-wing drones with a longer range and greater payload than quadcopters. Captured workshops have included Skywalker X-8 consumer drones, as well as airframes built from scratch with commercial drone engines and autopilots, components that can be acquired easily online. ISIS has expressed an interest in fixed-wing drones firing guided rockets, and on Feb. 21 the Turkish publication Daily Sabahquoted military sources as saying a missile from an ISIS drone killed two students.

ISIS is also seeking larger, more capable quadcopters. Captured drones included a large commercial quadrotor carrying an RPG-7 warhead. In theory, this could penetrate the thin top armor of even the heaviest tanks.

New developments in consumer drones are likely to be adapted by insurgents. U.S. forces in Iraq urgently requested drone jammers. However, consumer drones are already capable of complete flights without human supervision. Recent DJI models boast features including obstacle avoidance, optical navigation and human detection. This technology could enable insurgents to build an autonomous attack drone able to fly to an area, locate targets such as people or vehicles, and engage them on its own. It would be crude and indiscriminate, but it would be impossible to jam. Without the need for operators, autonomous drones could be deployed in large numbers in saturation attacks. This could be devastating against a force that had come to rely on jamming protection.

Small, cheap armed drones are starting to make an impact on the battlefield in Iraq and Syria, and this is likely to increase—as is the prospect that such drones will be used by terrorist groups closer to home.