The pilot set their radio down, and was headed out to the wreckage with another pilot accompanying him.  Walking out to the crash, it became apparent that there was now a much bigger problem as smoke and flames erupted. Luckily,  there was a fire extinguisher on hand,  and it was enough to get the flames out before the fire department arrived with water and shovels to ensure there were no hot spots. Had it not been there,  the fire would have grown for the several minutes it took the fire department to arrive.  By the time they got to the fire with the extinguisher, it would have been impossible to stomp out.   Remember,  we have no local water service at the field.  No hydrants,  no water spigots, no sprinklers.

Look at the photo.  Aside from the dirt (the char is now gone)  all you see is FUEL.  Fuel for fires.   Consider there was no handy extinguisher on hand,  what the result could have been.
Now ask yourself:  Do you have a fire extinguisher? Do you fly with lipo batteries, at our field? Have you ever seen a plane crash at SEFSD?  Believe it,  it can happen to you.   How would you feel if you caused a substantial fire at mission bay?

I urge you,  beg you, and plead with your sensibilities.  Please,   go buy a fire ex,  and keep it with your flight gear,  keep it in your car that you to flying with,  have it handy.
Be the hero with the fire extinguisher,  you cant be a hero if you don’t have one. 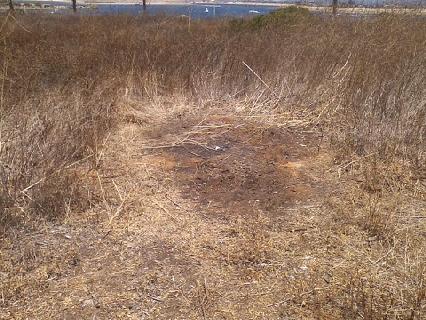