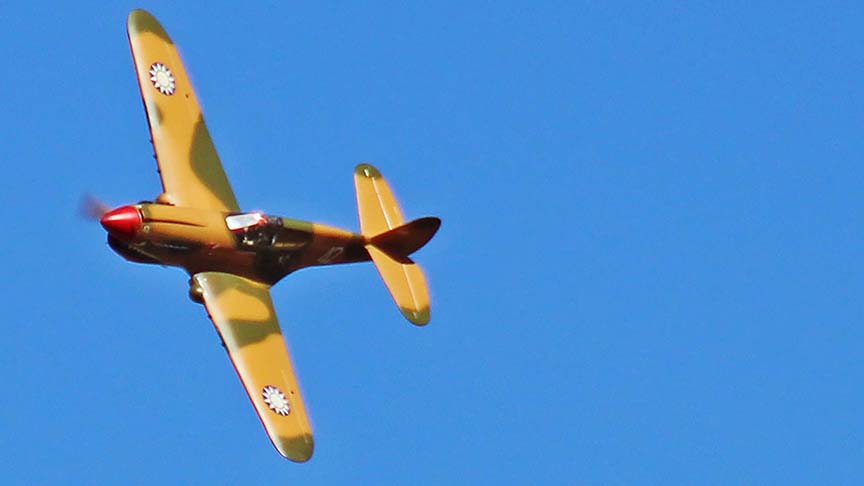 Reports from Frank Sutton:
I can tell you we certainly had a very fun time with the one exception of Randy’s T-28 crash into one of many fences out past the runway.  It was quite challenging I think for the SEFSD Pilots to be flying in a much smaller flight zone and with so many obstacles to crash into if flown too far out or too low (as Randy unfortunately discovered on the first lap of the first T-28 Race!).  I didn’t get a shot of the crash, by the way, but I did get a shot after the crash.  Their runway was outstanding though, and the covered pit area was crowded but nice.
Brad won a beautiful trophy for the Judges Choice Award, and Alex won an airplane from the raffle.  The T-28 Races were closely watched by all the Weedwacker Pilots, and the close racing action had the crowd cheering!  They were also cheering for Super-Otto flying through the air with its improved thrust!  WOW – I’ve never seen it fly so well before, Otto has definitely made some great improvements!  SEFSD can be very proud, our Pilots put on one heck of a good show for the Weedwackers and everyone had a fun time too!
Quote from IFLYAMA:  SEFSD Pilots attended the Weedwackers Aerosquadron’s Veterans’ Day Fly-In on 13NOV2021; what a FUN time for all! SEFSD Pilots demonstrated T-28 Pylon Races and Otto flew his “Super-Otto” for the Weedwackers Pilots and Families to enjoy – and they were enthusiastically cheering loudly! We’re hopeful that we may someday enjoy some racing competitions between our two clubs! The Weedwackers hosted an outstanding event, excellent lunch, a salute to all the Veterans, and they helped raise some $$ for the Marines’ Toys for Tots in the process! Thank you, Weedwackers Aerosquadron of Lakeside, CA!