Based on a Presentation by Ken Myers to the Midwest RC Society in Feb. 2018

The Label:
The G5, at the top left of the label, indicates that it is a 5th Generation Hyperion brand LiPo battery. The SV, at the upper left and right indicate that it is a Standard Voltage type.
There are High Voltage (HV) LiPo batteries, with a charge termination voltage of 4.35V/cell.
The 4.20V/Cell Max Charge, under the SV on the right side of the label, indicates that it is to be charged to a termination voltage of 4.20V per cell. Again, this indicates that this is a SV LiPo and not a HV LiPo.
The 3S/11.1V indicates that the battery is 3 cells connected in series (S) and that it has a nominal voltage of 11.1V. The 11.1 is not a cardinal number, it is a nominal number, a number that names something. It has no useful numeric value. Each SV LiPo cell is said to have a nominal (naming) value of 3.7V per cell, therefore, three cells in series is the sum of three nominal 3.7V cells.
All that the notation of 3S/11.1V is doing is confirming that this is a 3 cell in series SV LiPo battery.
It should be noted that some chargers also display a similar notation on a ‘confirmation’ screen before the charger can be started by the user when balance charging.
50C Maximum states the manufacturer’s maximum recommended discharge rate.
2100mAh is the manufacturer’s stated capacity.

A Comment Before A Closer Look at the Specifications

For almost all of our electrically powered flight systems, we measure the current in amps (A), not milliamps (mA). That becomes relevant when discussing capacity, charge rates and discharge rates.

Breaking Down the Specification Numbers

The following specifications were cut and pasted directly from the supplier’s Web site for this battery. https://www.rcdude.com/product-p/hp50c2100s3.htm

Hyperion G5 50C Max – 2100mah 3S Lipo
Specifications:
Capacity: 2100mah (should be mAh)
The manufacturer’s stated battery capacity is based on a constant current load that they say is required to take a cell/battery from ‘full volts (V)’ to ’empty volts (V)’ in one hour.

“By international standard, all cells are rated for capacity at 0.2C, where C = nominal capacity of the cell when discharged at a rate equal to 0.2 times the predicted capacity for the cell. The rated cell capacity is actually statistically established since the actual is not known until tested.”
FMA LiPo Handbook Section 3, p. 18 https://www.rcgroups.com/forums/showatt.php?attachmentid=2895498 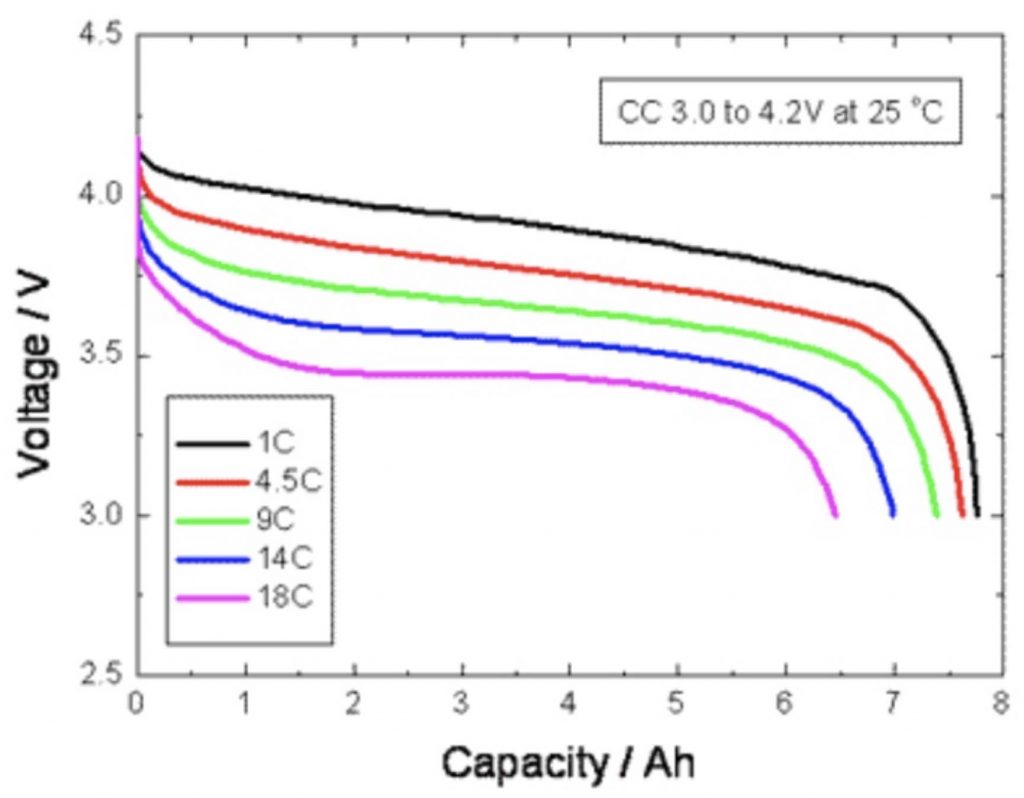 “The discharge curves show the effective capacity of the cell is reduced if the cell is discharged at very high rates (or conversely increased with low discharge rates). This is called the capacity offset.” http://www.mpoweruk.com/performance.htm 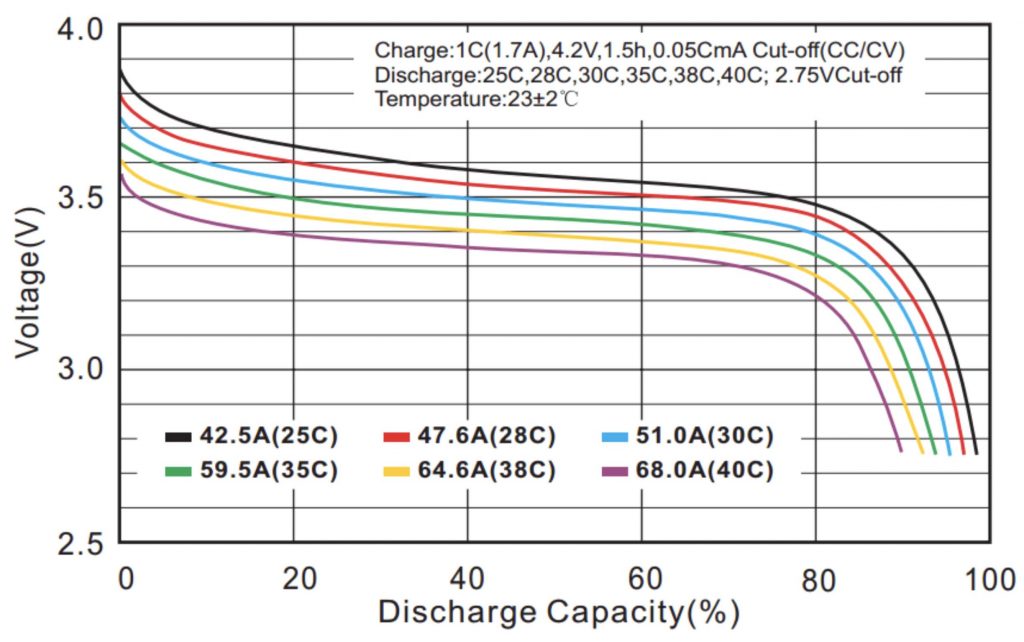 The graph illustrates why no more than 80% of the stated capacity should be removed from a battery.
It is important to remember that the actual battery capacity diminishes over time.
Again, the capacity we use in practice is how much usable capacity the manufacturer says the battery ‘holds’ – 2.1A for an hour for the example.

DO NOT MISTAKE charge and discharge rates with the capacity, since they are in the same units. Rates vary. Capacity is ‘considered’ to be, and used as, a constant.
Next on the specification list is Nominal Voltage:
Voltage: 3S, 11.1v nominal
This confuses many beginners. It is NOT a cardinal voltage. Why they list it as ‘Voltage’ is unknown.
The 3S, 3 cells in series, was already stated in the nomenclature for the pack. It is redundant information.
11.1V nominal is not a cardinal number, it is a nominal number that names something. It is just another way to note that this pack is a 3S LiPo. It is redundant information, and a bit confusing.
As previously noted, 3S 11.1V is sometimes noted on a confirmation screen of a charger, so it might be useful in that situation. Charge termination voltage is more important and NOT listed in the specifications. It should be; Charge Termination Voltage: 4.20V/cell, 12.6V for 3S

A rate is some type of unit for a time period; mph, gallons per minute, amps (A) per hour (h) = (Ah).
For rechargeable batteries, the charge and discharge rate is stated as a factor times the capacity, which also happens to be a rate.
When dealing with charge and discharge rates, it is best to use capacity in amp hours (Ah) or amps per hour or amps/hour.
From the example battery specifications – Discharge Rate: 50Cmax (50C burst, 25~30C continuous) 50C Rate = 50 (the factor) * 2.1Ah (the capacity) = 105Ah or 105 Amps for/per 1 hour
In theory, that discharge rate is 50 times higher than the rate used to identify the capacity of the battery.
In theory, this rate will “empty” the battery 50 times faster.
The constant load amps to achieve the 50C rate is 105A; 50 times 2.1A.
What does ‘Burst’ mean? Typically it means something of short duration, but how short is short? 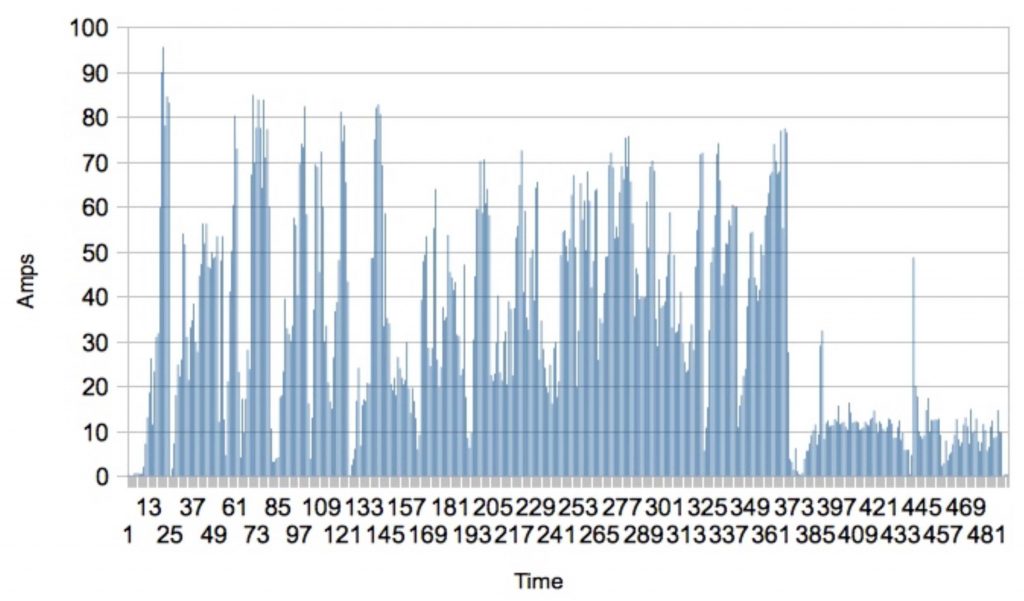 The graph shows the amp draw over a 1 minute 47 second flight of a Vortex 250 multi-rotor. https://www.youtube.com/watch?v=XkQi0tSr0UQ
The pack was a Turnigy Graphene 4S 1300mAh 65C cont./Burst 130C LiPo.
The highest recorded amp draw was 95.5A. That is a discharge rate of 73C, which is well under the stated 130C. The average amp draw for the March 2018 the Ampeer page 5 flight was 35.1A. That yields an average of 27C for the discharge rate.

The stated burst amps value might be useful to rotor-craft pilots with telemetry or onboard data recorders including data recording ESCs.
It is not generally too useful for plane pilots.
Stating high C-rate numbers are great hyperbole for the company’s advertising department.
From the example battery specifications – (25~30C continuous).
The ~ symbol means about. It’s not a – which means through.
Why is a range stated?
The note on the specifications reads, “CMax = Continuous C-Rate for 100% rated capacity delivery is 1/2 C-Max rate.”
In theory, a constant current equal to the Maximum Continuous Amps, 52.5A, would only last 1 min. 55 sec. from ‘full’ to the 80% recommended capacity used.
On average, a 4 minute flight on this pack, which is pretty aggressive for electrically powered model airplanes, from ‘full’ to exactly 80% of the manufacturer’s stated capacity used: 1.68Ah (80% capacity) * 60 minutes = 100.8 A minutes / 4 minutes = 25.2A, 12C, as the flight average amp draw.

Practical Limitations to the C-Rate

The numbers on the table are “in theory” numbers when a constant load is applied to go from the manufacturer’s full stated capacity to 80% of that capacity.
They can also represent the average C-rate over that time period.
Calculating Average Amp Draw & Average Crate, a How to Example Using the 2S 2100mAh Pack
Example numbers are in parentheses. Time the flight (6 min. 12 sec. or 6.2 min.) After a cool down period, charge the pack and note the mAh returned by charger – It will be slightly higher than the actual removed. Depending on the charger the returned capacity could be shown as either mAh or Ah. If it is Ah then change mAh to Ah (1550mAh / 1000 = 1.55 Ah) Change Ah to A minutes by multiplying Ah * 60 minutes – 1.55Ah * 60 = 93A minutes Divide amp (A) minutes by flight time in minutes. That yields the average amp draw for the flight. 93Amin / 6.2 min = 15A avg. Divide the average amp draw by manufacturer’s stated capacity in Ah 15A / 2.1Ah = 7C (7.14…) as the average C-rate.
This a question that maybe Ampeer readers can answer, I can’t. Many electrically powered sport, sport scale and trainer planes typically fly about a 6 minute flight. With a 6 minute flight to 80% of the manufacturer’s stated capacity averaging between 8C and 7C, how are users reportedly puffing so many LiPo packs on a 6 minute flight?

This company chose not to state the discharge wire AWG (wire gauge size).
It is important.
The suggested continuous current amps should determine the required power wire size.
It is not unusual to find power leads with too small of a wire gauge used on power leads compared to the advertised maximum continuous current.
Unfortunately, wire gauge usage size is a debatable topic. Lucien Miller, of Innov8tive Designs, suggested in a post on RC Groups, that for our purposes, “in RC applications, we can use 100 circular mils per amp or even 75 circular mils per amp…”
“The size of the wire depends on 2 things, the actual application and the length of the wire.” https://www.rcgroups.com/forums/showpost.php?p=5454395&postcount=4 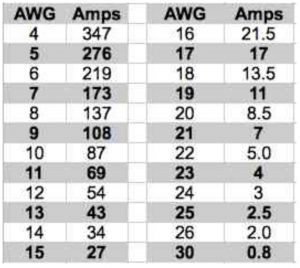 Practical Considerations Concerning the Use of LiPo Batteries

Never discharge lower than 80% of the manufacturer’s stated capacity.

Charge in an area where a possible fire and and huge volumes of smoke won’t be a problem.

The user MUST be in the immediate charging area in case of a charging ‘incident’.

A means of containing and extinguishing a fire should be on hand in the LiPo charging area.

Practical Considerations When Choosing A Charger

Revolectrix has added a new algorithm called “Ioniq profile” to the Gt chargers. It alters the current during the switch from CC to CV stage to reduce cell damage for HV LiPos. https://www.rcgroups.com/forums/showpost.php?p=38798202&postcount=6

Keep in mind that packs to be used soon are, more often than not, charged from a storage state of about 50% charged, not ’empty’.

On a Personal Note

Practical Considerations for Charging 2 of the Example 3S 2100mAh packs

A Personal Note on using the Hyperion 3S 2100mAh Packs

A Look At Cost Versus Value of Chargers, A Word of Advice for Beginners