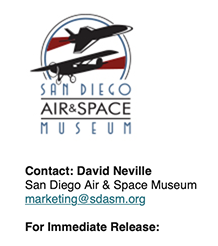 San Diego, CA – March 11, 2022 – The San Diego Air & Space Museum is remembering Brigadier General Robert L. “Bob” Cardenas, USAF (RET), whose distinguished aviation career earned him an honored spot the prestigious International Air & Space Hall of Fame. General Cardenas passed away on March 10, 2022 at the age of 102. Since 1963, the International Air & Space Hall of Fame has honored the world’s most significant pilots, crew members, visionaries, inventors, aerospace engineers, business leaders, preservationists, designers and space explorers. Cardenas entered the International Air & Space Hall of Fame at the San Diego Air & Space Museum in 2008. “General Cardenas embodied the spirt of aviation and space exploration which earned him an honored place in the prestigious International Air & Space Hall of Fame,” said Jim Kidrick, President & CEO of the San Diego Air & Space Museum. “General Cardenas was a remarkable man; war veteran, witness and participant in the history making flight which helped usher in the age of supersonic flight and space travel; accomplished test pilot; and all-around true gentleman. The San Diego Air & Space Museum mourns his loss while remembering him fondly for his incredible achievements and contributions to aviation.” Brigadier General Robert L. “Bob” Cardenas, USAF (RET) flew over 60 different aircraft in his career as a test pilot, combat leader in bombers and fighters, and Commander of the Air Force Special Operations Force. Gen. Cardenas began his military career as a private in the Army Cost Artillery. He became a pilot as a cadet in the Army Air Corps, and was commissioned a 2nd Lt. in July 1941. In 1942 he was sent to Twenty-nine Palms, California to establish an Army Air Corps Glider School. His distinguished military career included flying combat missions in B-24 Liberators over Germany. Shot down on his 20th mission, he evaded capture and escaped. As a test pilot, he participated in the flight test evaluation of the German jet fighter ME-262 and the Arado 234 bomber.

Cardenas was an instrumental member of the X-1 supersonic project. He served as operations officer and command pilot of the B-29 that launched Captain Charles Yeager into the realm of supersonic flight on October 14, 1947.  Gen. Cardenas was a key figure in many of the United States’ foreign military operations, including Korea, India, the Himalayan Mountains, Pakistan, Thailand, and North Vietnam. Gen. Cardenas had the dubious honor of negotiating with Muammar Gadhafi the withdrawal of U.S. forces from Wheelus AFB in Libya.  As the U.S. Deputy to Live Oak in Belgium his responsibility to SACEUR was to maintain open corridors to Berlin by calling the Soviets bluff to block travel to Berlin by land, air or rail.  Prior to his retirement in June 1973, General Cardenas served as Chief of the JL Division of the Joint Strategic Target Planning Staff (JSTPS), where he was responsible for the development of the Joint Strategic Target List of the U.S. nuclear War Plan (SIOP).  In 1983 Cardenas served as the California coordinator for President Reagan’s Southwest Boarder Economic Action Group. He also served as General to California Veterans, Chairman of the San Diego United Veterans Council and Director on the Board of the Veterans Memorial Center & Museum.  For his service, General Cardenas earned many honors, including the Distinguished Service Medal, Distinguished Flying Cross, Purple Heart, Meritorious Service Medal, Joint Service Commendation Medal, and the Presidential Citation. Foreign decorations include the Spanish Grand Legion of Aeronautical Merit with Sash & Dagger.

The San Diego Air & Space Museum is California’s official air and space museum and education center. The Museum is an affiliate of the Smithsonian Institution, and it was the first aero-themed Museum to be accredited by the American Alliance of Museums. The Museum is home to the prestigious International Air & Space Hall of Fame. The Museum is located at 2001 Pan American Plaza, Balboa Park, San Diego, CA 92101. The Museum and gift store are open daily from 10:00 a.m. to 5:00 p.m. with admissions until 4:30 p.m. Closed Thanksgiving Day and Christmas Day.