Some years ago when the event venue was first changed from Pasadena to its present location at the Ontario Convention Center I was flying demonstration duty for GWS. That first year was a disaster for the demo pilots as the “flight venue” as it was generously called was a spot against an interior wall measuring what seemed to be approximately the size of a postage stamp. Undaunted, we attempted to fly such craft as SlowStiks, Tiger Moths and such but finally gave up when one plane darn near took out a very expensive sailplane well out of the “flight area”. To make matters worse, many others were flying aircraft all over the place over the crowd’s heads with absolutely no frequency control in existence. A disaster waiting to happen. Event Organizer Jay Mealy who himself was had been drafted for the job that year was in real life the AMA/FAA liaison with no prior experience with organizing the event. I approached him with my concerns…a bunch of times over the course of the weekend. It was decided that we could try to get an adjoining ballroom for flying in the following year. Cool! 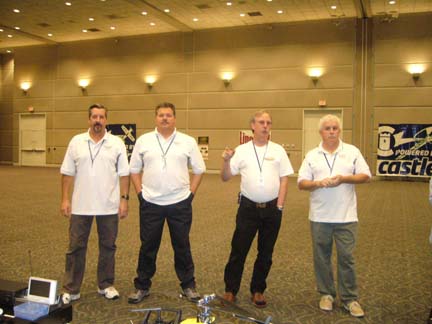 The following year I was halfway to the GWS booth when a hand was clapped on my shoulder spinning me around. It was Jay. “Glad to see you, Mark.” “Likewise, Jay.” “I’m REALLY glad to see you, Mark.“ Something was up. “Why??” “I need your help. I’ve got no frequency control, no organization but we do have a bunch of vendor pilots that want to fly. Can you help?” Oh, brother. I gave him a short grocery list of things we’d need and informed GWS that I’d be back, if possible, citing my conversation with Jay and headed for the ballroom. I grabbed a couple of friends on the way that I recognized and drafted them as extra eyes and called a pilot’s meeting over the PA. The flying area was better but half of what we use today.

Oh, boy. At least two dozen pilots stood there excited and wanting go get to the flying. The frequency board was a dry erase board on an easel with an eraser and a marker. The pilot’s meeting consisted of this short speech 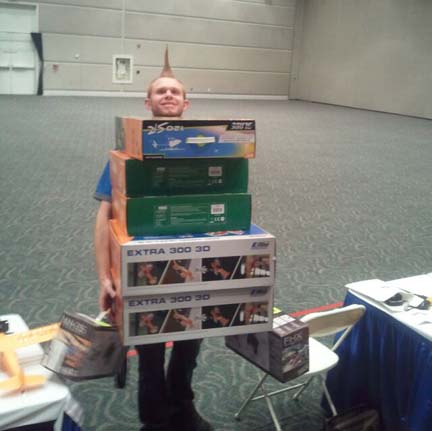 “Hi. I’m Mark. We’re going to call this next couple of days ‘organized chaos’. You MUST be a current AMA member to fly here this weekend. This dry erase board is the frequency control pin board. When you get ready to fly, write your name down with your frequency number next to it. When you are finished, erase it so the next guy can fly. If you can’t deal with that, please leave now because you’re too stupid to be here. Try to avoid the sprinklers in the ceiling as knocking one off will end this weekend very quickly. Share the air and have a good time.” Absolute carnage ensued. Thirty-five planes showed up and three were left standing Sunday afternoon with the trash cans full of small foam pieces and orange chunks of GWS props. I’m not sure who had more fun…the spectators or the pilots but apparently the ballroom smelled of foamsafe CA kicker for days afterwards.

Alex Smith is an 11yo Black Sheep Squadron pilot that we “adopted” on Sunday while his grandfather worked next door at the Make and Take exhibit. 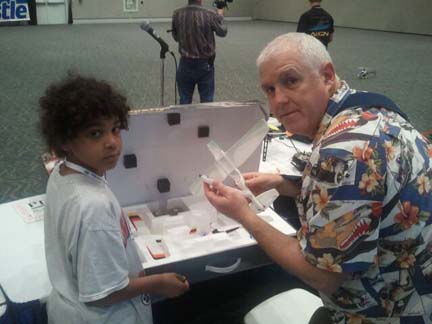 The following years saw me becoming a permanent fixture in the ballroom, the doubling of the flight area, addition of a floor-to-ceiling safety net which showed its value early on and pretty much the same bunch of crazies that have graced the place since Day One. We also enjoy the appearance of many of the hobby’s notables. We have had such pilots flying alongside us as Mark Leesburg, Jason Shulman, Andrew Jesky, Alan and Danny Szabo, Tim Jones and Jason Krause amongst many other great pilots. We also see flight teams from vendors such as Align, DW Foamies (Thanks, Mike!!), Futaba, Castle Creations and others. Carl Rankin of RC Trayman.com always brings along something new and wonderful made of Reynolds Wrap, soda straws and sewing thread that always fly so gracefully.

That’s how the goings-on in Ballroom A/B started and it continues to improve each and every year. Our regular venue guys are: Pete Rissman (PGR on RCGroups) is from Costa Mesa and is our very capable DJ. He prides himself on a great mix of music that somehow often matches what is going on in the air. Jim Scott (Pismo) is from Penasquitos has a great eye for detail. Joey Cass is a Giant Scale pilot from the Claremont area. I met him at the Chula Vista field late one evening and shamed him into flying my Air Hogs Sport. His dad is a retired weapons designer with the Sidewinder air-to-air missile and Phalanx ship defensive system to his credit amongst others and quite a character. Last and certainly not least is Fred Bronk. He’s the e-heli guru on RCGroups. Fred and I have been doing this stuff together since the first days of RCX  at the Anaheim Convention Center now at the Los Angeles FairPlex. Fred hails from the Sacramento area and got me my first gig at RCX flying for GWS and I hold him somewhat responsible for starting the whole mess. The faces change sometimes depending on schedule but most make plans a year in advance for the occasion. I thank each and every one of them for their efforts, talents and time invested in making the flying venues at both events safe and fun for everyone.