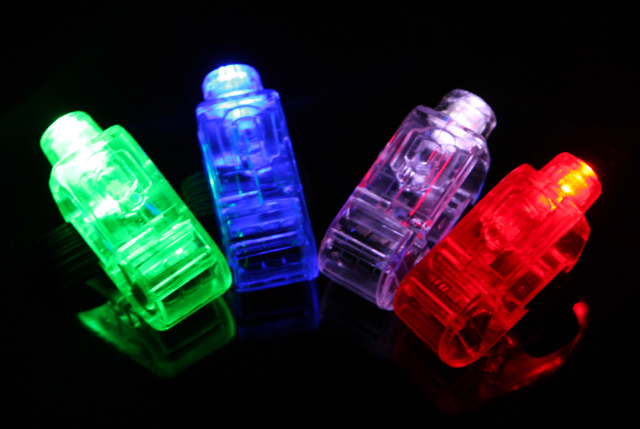 You can get a pack of 4 of these, for $2 at Koby’s swap meet at the
Sports Arena, where all the cheap china stuff is.

I would simply cut the elastic off,  add some velcro sticky-sticky and
go night flying. I’d stick them above and below the wing, aiming the
light at strategic locations.
Red and green were always put in the right place for navigation
because they always came in the pack and it helps with orientation (at
least that’s what I hoped).
I would stick on 10 or so of these and just go flying.  SUPER FUN!  I
was hooked.   Cheap, and it did not affect my airplane when not at
night.

Well, being those finger lights are from China,  they really don’t
last too long.  Usually a weekend or two and thats all you get from
the batteries (there are 3 watch batteries in the case). I nicknamed
my Slo Stick the “Glo Stick” and had a very easy time with night
flying a gentle lazy airplane.   After a couple of years of night
flying,  I had a pretty big collection of dead finger lights.  Being
at home one Saturday morning, the light bulb came on over my head,
and I popped open one of the lights, getting the LED out of the
case.    I attached it to a 4 cell nicad RX battery pack,  and it was
plenty bright!  Come to find out,  they are 3~5 volt LED’s,     I
started cracking cases and found I had over 50 useable LED’s.     I
went to Industrial Liquidators looking for light gauge wire,  and
found a big spool of computer ribbon cable for $2.00, I just peel off
strands as needed of the wire,.  its super light, flexible and tough
too,

I picked out a handful of white lights. I wanted to go all white as
they were the most visible in my learned opinion (these LED’s all
start to look like white when you are 200 feet away).  I attached 18
LED’s to strands of wire and mounted them all onto the Glo Stick.  8
on the fuse, and 8 on the wing. I mounted them on permanently, and
they dont affect the airplane at all.  Minimal weight of under 1 oz.
It was plenty bright enough,  but something was missing.  When
flying,  it looked like a bunch of stars,  or dots flying around.  You
didnt really have much to orient yourself with,  there was no outline
of the airplane. Without the plastic of the finger lights,  I could
only see the bright dots.  I stumbled across a video on youtube of how
to make a single flashlight light up ta whole tent while camping and
realized thats what I was missing,  I needed to put a defuser on the
lights,  to catch the light, not just shine it into the darkness.

I thought of those fiber optic type lights and the light bars,  and I
remember these plastic covers that you put over fluorescent light
tubes and remembered how they work, and started looking for narrow,
pastic tubes.  I thought it looked like a drinking straw.  I went to
the local Jack in the Box  and grabbed a few straws.   Simply put, it
was beautiful !  Super effective, and still super cheap.   I just
taped straws on where my lights were,  and presto !  LIGHT BAR”S!!
With some zip ties,  some hot glue,  some heat shrink tubing, packing
tape and soldering skills  I made permanent lights for the Glo Stick
that run right through the RX, off the onboard power from the ESC.
The amp draw from all the lights combined is still only 1/4 of the
draw of one servo.  I don’t even adjust my flying time when the lights
are on, thats how little they affect the power.  Minimal weight now
that there are no cases and batteries, and super bright. 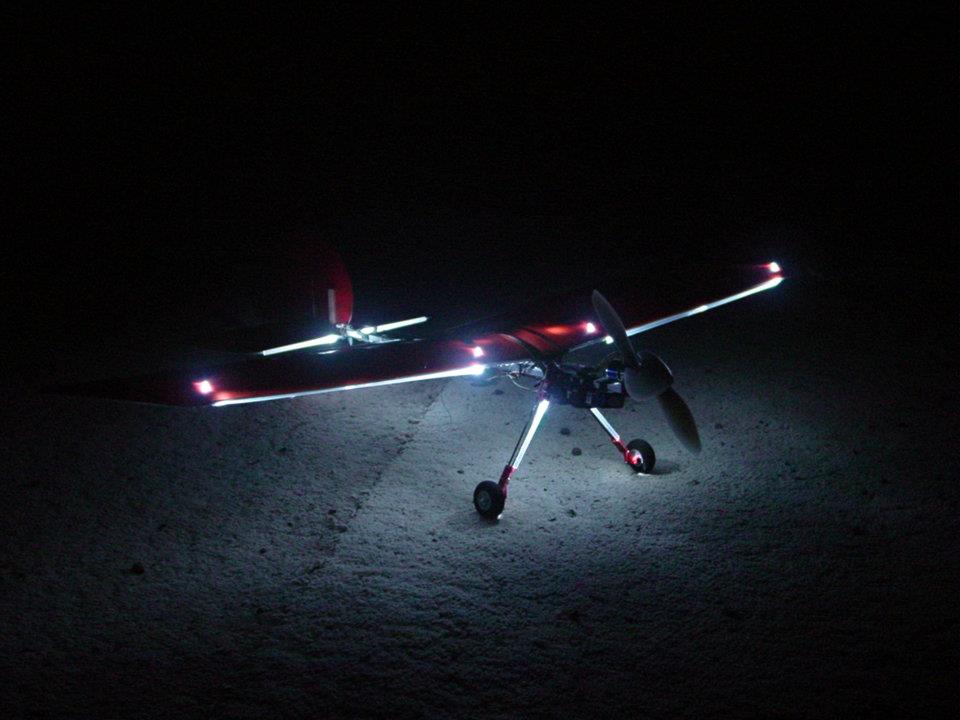 Yup,  those are drinking straws.

Thats Richard unplugging the Glo Stick after a night flight.

I think my total investment in putting lights on my renamed “Glo
Stick” is under $10.00,   and thats what I call “Night flying on the
CHEAP side!'”

If you have been considering trying night flying,  NOW IS THE TIME!
Our first night meet is March 10, 2012 at SEFSD Field.
It really is a wonderful experience in RC, Its challenging, but not
impossible. Exciting, but not dangerous.
Come on down and see how amazing it is to fly at night in the quiet,
still air of Mission Bay.