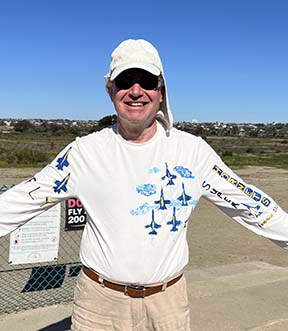 Well, never mind my November column reminiscing about the past year as your President: we have one more Newsletter to go! Short and sweet says Mr. Editor, the kind Mr. Belknap. Let me start off by thanking Larry Kosta for taking the action to divest the Club trailer. It is one thing to advise on how it should be done, but there are some complicated logistics tasks involved and Larry stepped up to the plate to do so. We should have the anticipated funds to offset some of the costs of the Winter Banquet which brings up my next topic.

Have you renewed your Club membership and purchased your tickets to the Grand Event, yet? Quan Nguyen did a great job enabling the Club Renewal along with the opportunity to purchase tickets to the banquet.  We’ve prepaid the Aerospace Museum and capped attendance at 100 guests. Since we have just over 300 members eligible and assuming every member could bring one guest, that’s 600 people eligible, so buy your tickets early (if you haven’t already) to ensure you don’t miss out! Jovi has already spilled the beans on the fabulous raffle aircraft and I can say the non-modeler guest prize array is shaping up nicely, thanks to Michelle Manganelli. The join/renew link was activated on December 1.  If you’re currently a member through December 31, your new badge with the new Gate/Potty combination will be printed and first available early in the year when we have “Badge Day”, likely the weekend of the 7th and 8th of January. Badge Day saves the club some $ on mailing; those not picked up on Badge Day will be mailed shortly thereafter.  The combination will be changed to the number on the new badges on January 14th . New members will be mailed a 2023 badge when they join up.

Our really last flying event of the year was a T-28 race that took place last weekend, the 10th of December.  Ten of us braved 65 degree temps, clear skies and virtually 0 wind to conquer the pylons, tough duty! The impetus for this event was a set of medals identified as “December” and “2022”, ergo we had to have another race to use them up. However, race master Mr. Neu forgot to bring them, but he did remember his airplane which he expertly piloted to 1st place in Gold class. Silver winner was Alex Sutton and Bronze to relative newcomer Artie Means, well done Artie! Steve did remember the prizes for the goodie raffle and the medals will be awarded next time he sees the awardees.

Glen Merrit of the Weedwackers announced he was taking over race master duties at their field next year and we are all invited to join in their races. He will follow our format exactly and his races will be scheduled on a Saturday other than the 2nd of the month so us racers can double up!  Watch for E-mail blasts announcing the dates.

Let’s go back to the subject of the Club Trailer. Paying to store things we’re probably never going to use again is waste of resources, but storing a few things we are likely to use is a different story. I have custody of a Gas powered back pack blower and a cordless back pack weed sprayer that belong to the Club. If field maintenance requires these things, let me know and I’ll arrange to get them out for you.  One final thing retrieved before the trailer goes to it’s new owner is a dry erase board having (to me anyway) a touching message pictured below. A little sleuthing suggested that “Sunday 5/16” must have been 2010, our last Mid-Winter Electrics, or “MWE Spring Fling” as I believed we called it toward the end. It’s a bit bittersweet that MWE didn’t go on, but at least I will “See you next year!” as your Treasurer. 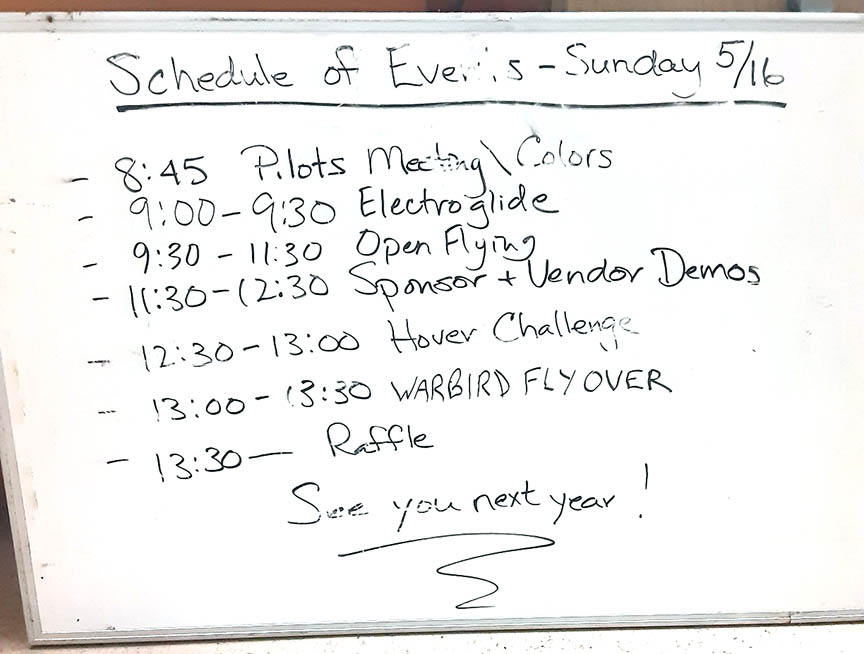